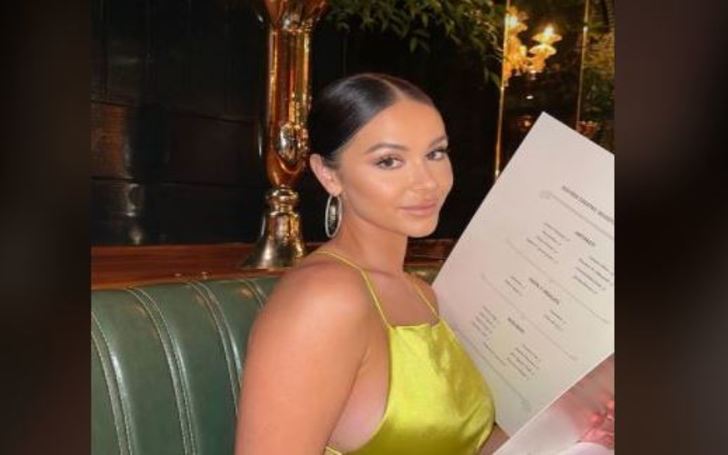 Daniela Rajic the wife of The Los Angeles Clippers shooting guard/small forward, Paul George. She is also the mother of his three children. The pair started their relationship in 2013 and has been together ever since.

It is fair to say relationships in the NBA seem to have way more theatrics than those of other sports. Rajic and George’s relationship is no exception. While they sparked romance controversially, in the present, all seems to be blissful between the two.

Know how the couple came to be. Also read all about Daniela Rajic; her life prior to becoming a sports wag, how is she doing as the mother of NBA kids, and many others.

She studied at the University of Miami. In order to support her tuition fee, she worked as a stripper in one of the most infamous strip joints of America, Tootsies (Gentleman’s Club Tootsie’s Cabaret). She was also a personal shopper and model at Saks Fifth Avenue.
Currently, Paul’s fiancee is a business partner with Los Angeles Clipper Patrick Patterson’s wife, Sarah Nasser. The duo co-owns a swimsuit line NUDESWIM.

Some Have Mistaken Her For A White Woman?

People often mistake Rajic for a white woman. She, however, is of an Eastern European heritage. Born in the ’90s, the mother of George’s children hails from a Serbian family. She has a sister, Kristina Rajic, and a brother, Aleksandar Rajic.

When Did Daniela Rajic And Paul George Get Engaged?

The six-foot-eight-inch small forward, Paul George asked his girlfriend, Daniela Rajic to marry him on November 6, 2020. George proposed to his partner at a seaside resort. At the spot, he had scattered rose petals all around them.

The round-one draftee, Paul then shared a series of pictures from the moment and subsequent celebrations. These included imaging of a shot glass with the words “She said yes.” He also aired a video of a band playing for the couple and their group of friends.

The diamond ring which George gave to Rajic was seemingly big, purportedly a 3-carat ring large round halo. WP Diamonds CEO Andrew Brown indicated the ring was likely around the cost, $50,000-$55,000.

George and Daniela first encountered each other in 2013 at a strip club in Miami where the latter used to work.

Paul and Rajic’s relationship, reportedly, started off on a bit messy page. Unlike other relationships, there were three people involved.

Several sources confirm, when the millionaire sportsman found out about Daniela’s pregnancy, he was then dating Charlie Rivers, the daughter of LA Clippers head coach Doc Rivers.

Sources had it that Paul had tried to resolve Rajic’s issue with money. As such, the former employee of Tootsies accused Paul of offering her one million dollars to abort the pregnancy.

However, responding to the now mother of his children, George denied that he offered her money to do any such thing.

Sometime after the news of the pregnancy, Rajic filed a paternity suit against the Los Angeles Clippers no 13. The tests confirmed Daniela was indeed pregnant with Paul’s child. Knowing this, the basketball player then filed for full custody of their daughter, Olivia. The New Yorker gave birth to her on May 1, 2014.

Paul and Daniela eventually settled to share the custody of Olivia. Paul’s attorney confirmed the news and came up with a statement that said the athlete and the dancer had reached a settlement with full joint custody. He also said the All-Star 2016 would be providing the financial package for his daughter. He added that the couple was going to raise their daughter together.

The attorney said Paul had always intended to do the right thing, and he had found it thrilling to be a father. The NBA star’s team said the settlements were going to be generous. The mother was going to have equal rights in raising her daughter.

After settling for joint custody, Daniela relocated to New York to allow Paul to be closer to Olivia.

Many believe Rajic and Paul were together for the sake of their daughter and that they didn’t love each other. The couple, however, nullified the assumptions when they announced the birth of their second daughter, Natasha in late 2017.

Apparently, Rajic and the father of her two daughters got pretty close after the former moved to New York. Daniela’s relocation consequently gave her and Paul to settle their differences. Not long after, they had their second child, Natasha on Nov 1, 2017.

They Had Their Third Child In 2021

Paul George, and his fiancee, Rajic announced that they were expecting a third child on June 24, 2021. The already mother of two shared a photo on Instagram showing her growing baby bump alongside the caption, “Woobie Jr. loading.”

And in October 2021, the pair welcomed their first son/third child. They named him Vuk which translates to “Wolf”, in honor of his mother’s Serbian heritage.

“Vuk (pronounced in Serbian Cyrillic as Вук) is a male Slavic name. It is predominantly famous among Serbs as well as Croatians, Bulgarians, Macedonians, Montenegrins, Slovenes. The name means “wolf” in that Serbian poetry as the medieval people considers the wolf a symbol of fearlessness.”

George has often publicly admired his babies’ mother, Rajic’s skills as a mother. On Mother’s Day 2020, Rajic’s soon-to-be husband dedicated some tributary words to his fiancée via his Instagram handle:

“Happy Mother’s Day baby. Thank you for putting up with my shit and being on top of yours! You’re amazing and incredible at your number 1 job… being mommy! Love you woobie,”

Daniela Rajic Is A Business Woman

The mother of three and Nasser had started the clothing line while Patrick and Paul were still playing for Oklahoma City. In addition to owning the company, Rajic and Sarah also model for their swimsuit product.

The wives of Paul and Patterson are also good friends off the professional sphere.

Rajic With Her Partner, Paul Lives A Luxurious Life

As per her Instagram, Paul’s future wife seemingly enjoys an extravagant lifestyle. People can spot her occasionally enjoying luxurious vacations with her children’s father and resting around extravagant properties.

It, however, is unclear what she makes for herself as a businesswoman and an influencer. There, though are a couple of sources that report Rajic takes away close to $50k for one professional shoot.

On the other hand, her fiance, Paul George is significantly rich with his net worth sitting north of $100million. He and Rajic live in their California house that has an estimated market value of over $2million. Worth mentioning here is the fact that that the former All-Star forward’s contract with the Clippers will pay him $190 million. This will be for over four years, which started from late 2020 & will run through 2025, according to ESPN’s Adrian Wojnarowski. Some analysts project the figure is as high as $226million.

Other Facts About Daniela Rajic:

Allegedly, Daniela Rajic has also had some fling with rapper Lil Wayne.