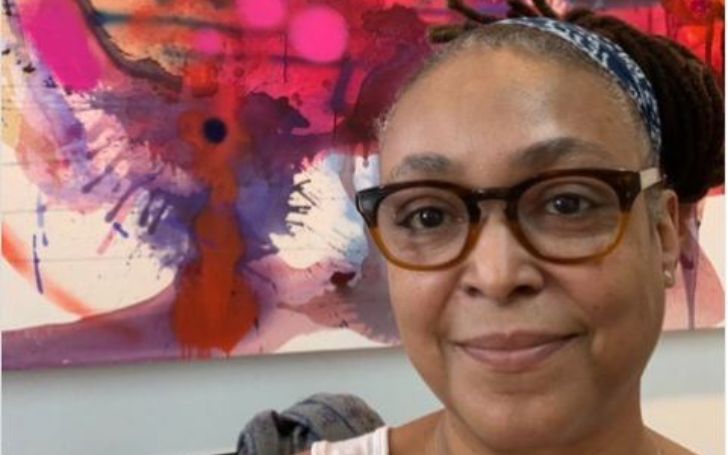 Erika Ranee Cosby is a painter by profession. She is better known as the oldest child of the fallen TV Icon Bill Cosby and his wife Camille Cosby.

Though being born a star kid, Cosby has managed to earn a name for herself through her hard work and dedication to art. She mainly focuses on abstract pieces. One of her pieces was even shown at the 50th anniversary of the Smithsonian National Museum of African Art.

In fact, the Cosby family caught media attention after her father Bill was released in 2021. Her dad actually made a series of headlines after becoming the matter of concern in numerous sexual assault allegations in 2014. Today, we will talk not only about Erika’s achievements and personal life but also about her family, especially her father’s numerous sexual assault allegations. Did Erika speak after her father’s release? Has the star kid ever addressed the matter? Find out here.

Early Life & Childhood- When Was Erika Cosby Born In?

Erika Ranee Cosby was born on 8th April 1965 in Los Angeles, California, the USA, and is 57 years old in 2022. She is the oldest child of stand-up comedian and actor Bill Cosby and philanthropist Camille Cosby.

She holds an American nationality and has Afro-American ethnic ancestry. Cosby grew up alongside her four younger siblings- Erinn Cosby, Evin, Ennis, and Ensa Cosby.

After high school, Erika went to enroll at Wesleyan University and graduated with a Bachelor of Arts degree in 1987. After that, she went to the School of Visual Arts in New York City where she earned her second degree in Bachelor of Fine Arts in 1989.

Similarly, Erika earned her Master’s in Fine Arts from the University of California, Berkeley in 1991. Furthermore, she also attended the Skowhegan School of Painting and Sculpture in Maine for a nine-week summer residency course.

During the peak of Bill’s career with the Cosby show, the family faced a tragic incident. On 16th January 1997, Erika’s brother Ennis Cosby was tragically murdered during an attempted robbery.

As per official reports, Ennis was attacked and shot dead by a man named Mikhail Markhasev who was just 18 years old back then. During the time of the incident, Cosby was driving north on Interstate 405 through the Sepulveda Pass. He had stopped by Skirball Center Drive to fix a flat tire of his dark green Mercedes Benz.

As per his then-girlfriend Stephanie Crane’s testimony, Ennis had called her and she had driven there and parked behind him to light the area for him. She further testified that a man suddenly appeared at her window and said ‘Open the door or I’ll harm you.’

Upon hearing that, Crane fled the location, and approximately 15 m away she heard a gunshot. She immediately drove back and saw Ennis shot and lying in a pool of blood.

Ennis was just 27 years old at that time. He was buried on 19th January 1997 in Shelburne, Massachusetts. The funeral was held at their family estate.

Moreover, in 2018, tragedy stuck the Cosby family once again when Ensa Cosby (then 44) passed away on 23rd February due to renal failure while waiting for a kidney transplant. She was also buried at the Cosby estate in Massachusetts also known as Ennis’ Garden.

As mentioned above, Cosby mostly focuses on abstract pieces. As for now, she owns an art studio in southern Brooklyn where she mostly does her artwork. She is also a benefactor of the summer institute for A Long Walk Home. It is an art-based sexual assault awareness program in Chicago, Illinois.

Likewise, from 2009 to 2010, Erika was an AIRspace resident at the Abrons Arts Center. Not to forget, she was also a recipient of a New York Foundation for the Arts Fellowship in Painting.

Erika’s work has been featured in several publications including San Fransisco Chronicle, The New York Times, and Artforum. Similarly, she showcased her art in Geoffrey Young Gallery in Great Barrington, MA, Klaus von Nichtsaggend Gallery, and at Freight+Volume as well.

Just in NYC, her work has been exhibited in Bronx Museum, The Parlour Bushwick, FiveMyles, TSA Gallery, Storefront Ten Eyck, and The Last Brucennial to name a few.

Even though allegations of sexual misconduct were filed several times against Bill for a long time, he was not proven guilty. Bill has been a subject of accusations of drug-facilitated sexual assault, child sexual abuse, and more which reportedly took place in the mid-1960s.

Over the past years, Cosby denied the allegations and maintained his innocence at all times. Among many Cosby victims, one of them was Judith Huth, a California native who grabbed media attention after filing a lawsuit against him in 2014.

In December 2014, Huth filed a lawsuit against Cosby claiming that the comedian sexually assaulted her in the Playboy Mansion back in 1975 when she was just 16 years old.

Though Cosby didn’t deny that he socialized with Judy, he disagreed that she was underage at that time. However, the jury ruled that he did know Huth was under the age of 18.

The Los Angeles County jury declared their verdict in her favor on 21st June 2022. She received $500k and no punitive damages. Judith Huth is one of few women who got justice for what they went through. Whilst 60 women filed against Bill, only a few made it to the court as many of them were beyond the statute of limitations.

Following a re-trial in 2018, Cosby was sentenced to prison for 10 years for three counts of aggravated indecent assault. He came out of prison in 2021 just two years later after his conviction was overturned on a technicality by Pennsylvania’s Supreme Court.

Just a few hours after his release, Cosby tweeted that he never changed his stance nor his story. He also thanked his fans and supporters for being there for him.

How Did Erika React To Her Father’s Case?

Even after years and years of trial and lawsuits against her father, Erika has not addressed the issue publicly. While her other siblings, Ensa and Erinn stood up for their father defending him and calling him innocent.

During an interview with NYC radio talk show The Breakfast Club, Ensa said,

“The accusations against my father have been one-sided from the beginning. When he tried to defend himself, he was sued in civil court. I’ve seen the accusations become more horrific and extreme with time, and I’ve witnessed my father’s reputation and legendary works be dismissed without any proof,”

“Over the last few years, my family has been forced to sit by and watch as our father has been attacked in the media. And it has been difficult to remain silent to protect our loved ones from scorn as gossip fueled in the news as big entertainment. But what you hear in the media is a far cry from who our father is.”

Did Erika Cosby Ever Marry Someone?

The 57-year-old is reportedly single at the moment. Likewise, she never married nor did she reveal any of her possible relationships. Nevertheless, no news of her love affair or possible marriage has hit the internet as of now.

As many people confuse Ranee with actress Erika Alexander who is married to screenwriter Tony Puryear. Let us clear some air, Erika Cosby never married nor did she have any children.

What Is Erika Cosby’s Current Net Worth?

The successful painter is worth around $3 million as of mid-2022. She is working as a painter for a few decades now and earned her fortune from her career.

Cosby also makes a decent earning from art shows in different places. Between 2012 and 2013, she worked as an adjunct art professor at New York University along with other artists like Dike Blair, Wayne Koestenbaum, and Huma Bhabha.