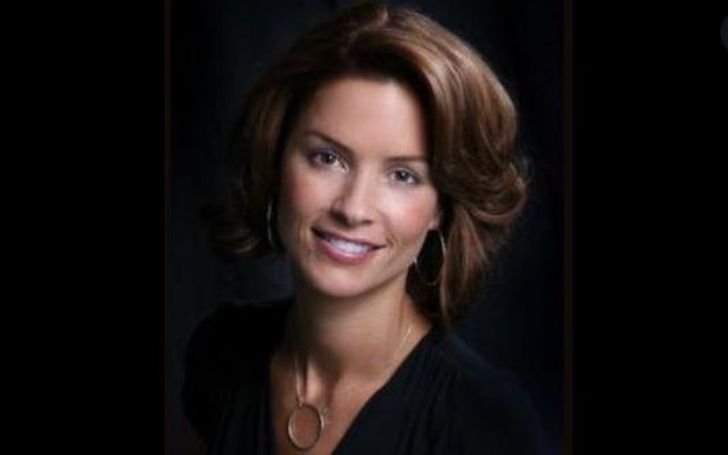 Erin Barry is a law graduate, an advocate for child rights, and the ex-wife of Brent Barry, a former shooting guard in the National Basketball Association (NBA) who won two league championships with the San Antonio Spurs.

Erin and Brent were together from the late ’90s to 2010s during which they became parents to two children. The former followed her ex-husband as his basketball career placed him on five different teams in 11 years. With each new city, Erin cultivated the sort of stability that made their lives more grounded, less nomadic.

All, however, changed when Erin became the woman who was supposedly at the center of actress Eva Longoria and Tony Parker’s marriage split in the late 2010s. The highlight of this long-gone debacle was Erin and her former husband, Tony (ex-teammate of Brent) exchanging hundreds of sexually charged text messages between them for over a year.

Know what the real issues were in the headings that are to follow. Decode if Brent’s ex-wife was really less than faithful to her ex-NBA husband. Also, read a bit about her early life, show she met the 1996 Slam Dunk winner and all.

Erin Barry Is An Adoptive Child Of Irish-Polish Parents

Former Mrs. Barry was born around the year 1972/1973. Erin once said she was born to a single, teenage mother.

Her biological mother, however, later gave her to an Irish-Polish couple who later added three biological children to the family. Talking about her adopted parents, the advocate said “It was kind of obvious. Here I was with my dark hair and olive complexion in this Irish-Polish family.”

While Erin has never mentioned her biological mother, she admits to staying with her for several days right after the birth. The now 48-or-something-year-old grew up in a small town near San Francisco and attended an all-girls Catholic school.

As for her higher education, she studied at the University of Oregon where she pursued a degree in English literature. She additionally also attended law school.

In fact, she was also a court-appointed special advocate and juvenile-court caseworker in Chicago when her ex-husband, Brent was playing for the Bulls. She served the same role in Seattle and San Antonio, ultimately specializing in abused and neglected children.

Erin and her ex-husband, Mr. Brent were high-school sweethearts who met while the former was a student at an all-girls Catholic school in San Francisco. The latter happened to be the student at an all-boys school across the street.

In an interview, Erin once revealed she and Brent fell in love when they were 16 years old. On their first date, they went to see National Lampoon’s “Christmas Vacation.”

Erin followed her high school boyfriend, Brent, through his five different teams. After high school, the former planned to attend the University of Oregon. Brent co-incidentally also got a basketball scholarship to nearby Oregon State.

Following his first couple of seasons in the NBA, Brent married Erin in a cathedral wedding in San Francisco in 1998. The couple, when together welcomed two boys Quin and Cade.

With Her Ex-Husband, Erin Advocated Against Child Abuse

While in San Antonio, Brent, and his ex-wife, Erin put their hands in several charity works fighting child abuse.

In their years together, the Vice President’s ex-spouse did a lot of charity work and pulled her husband in as often as possible, using his status to get more attention for worthy causes. When still married to Brent, Erin mostly worked as an advocate for abused children, first as a caseworker and then as a political lobbyist.

When her ex-husband played basketball in Chicago, she became a court-appointed special advocate and a juvenile court caseworker. Whilst doing so, she set the precedent for similar work when she and the ex-Spurs no 17 relocated to Seattle. To say more, Erin and the former shooting guard, in 2004, moved to San Antonio amidst a rash of high-profile child abuse and neglect cases.

When the ex-couple got there, the mother of two joined the executive committee of the Blue Ribbon Task Force. There she worked under State Representative Carlos Uresti and Bexar County District Attorney Susan Reed.

She was additionally into an environment different from the hands-on casework she was accustomed to. Later Erin was in a more political environment: Helping to write a House bill that would go to Austin.

She subsequently participated in lobbying efforts at the state level and worked alongside lawmakers who were urgently trying to overhaul a collapsing child welfare system.

Erin Barry Did Some Significant Impacts As An Activist

One of the most notable results of former Mrs. Barry’s work from a legislative standpoint is Senate Bill 6, which mandates sweeping reform for Child Protective Services.

Erin and Brent when together also created “Barry’s Blue Ribbon Assists,” a fund-raising effort that operated under the Spurs Foundation, in conjunction with the task force.

Through that channel, they raised thousands of dollars and garnered corporate sponsorships that helped stage an annual 5k run/walk event and provided tickets for each Spurs home game expressly for CPS caseworkers and their guests.

In 2005, the adopted daughter of Irish-Polish parents became a board member of the Bexar County Child Welfare Board. Soon she was also on the steering committee for the Heart Gallery of San Antonio, which put the faces and stories of kids waiting for adoption in front of the community.

She has always claimed to be an advocate for abused children and the one who has spent her adult life fighting for children who have been victims of domestic abuse.

Twelve years into the marriage and Erin filed for the divorce from Brent on Oct. 29 2010 in San Antonio, citing irreconcilable differences.

The two’s separation at the time became quite popular fodder for the news tabloids. This mostly also consulted one other famous couple, Brent’s the-then Spurs teammate, Tony Parker, and his ex-wife, actress Eva Longoria.

As such it is widely believed the downfall in the aforesaid two couples’ marriages began when Parker and Erin’s infamous affair was out in the open.

The former Brent couple’s separation happened at the same time when Longoria and her former husband, Parker divorce were taking place.

The Desperate Housewives actress, Longoria had found the text messages between Erin and Parker and filed for divorce promptly after just three years of marriage.

Sources close to Longoria said it was the multitude of sexy texts that led her to file for the divorce. Their marriage had already been experiencing strains due to long-distance and early infidelity by Parker.

Multiple sources say Erin and Tony carried on a graphic textual relationship for about a year, but those are the only details anyone can agree upon.

Though it was reported Parker and Erin never got physical. Tony and Barry, at the time, were also teammates at the San Antonio Spurs and also each other’s friends. Later when the news hit the media, hundreds of people went on Facebook and called out Parker for his infidelity.

Explaining the then situation, Erin, on the other hand, said,

‘I DID NOT HAVE AN AFFAIR WITH TONY PARKER, nor did I “pursue” Tony Parker. Unfortunately, because our divorces are occurring at the same time, great speculation has been cast on our friendship.

She added her friendship with Tony Parker had nothing to do with the end of her marriage with Brent. She also declared people assuming they had an affair was naïve, ridiculous, and completely misguided.

Erin later also took to her Facebook to have her say denying the whole affair rumor. The Oregon University graduate stated she’d rather focus herself on deprived children and their health, her family, and her friends.

She and Brent nonetheless divorced on January 5, 2011, in Texas, and shortly after they agreed to share joint custody of their two then-minor children.

Their divorce documents also showed the couple signed a confidential prenup before their marriage, determining how they were going to divide their property.

Erin received $4000 a month in child support until 2013, on the agreement that three years after she graduates from law school she will provide for herself.

Where Is Erin Barry Now; Has She Remarried, Who Is Her New Husband?

While her former partner, Brent is now a VP of his ex-team, SA Spurs, almost inconceivably about Erin herself has been in the internet summaries or among such correspondents, not at least in recent times.

And although Erin’s ex-husband is quite a regular attendee in social media with his Twitter handle, the mother of his two children is almost a blanked-out name on suchlike spheres.

That being so, it is categorically unsettling if Erin in the present day is married or has a new husband. What’s not in the records either is the current at what place of erstwhile Mrs. Barry; her line of work or if she is still with her work of reducing child abuses.

On the other hand, Tony Parker, the man with whom Erin was once rumored to have an affair is currently with a new partner, Alize Lim, a French tennis star. As for Tony’s famous ex-wife, Eva, she has been with her current husband, Jose Baston whom she married in 2016.

For all the heed Erin Barry received during her messy separation from Rick Barry’s son, she now, however, is a complete full-on no-name be it in among the general masses or spectrums like Instagram, Facebook, or Twitter.

Conversely, though all the names that at one time were within the bygone on-dit of Erin are still so-so lively on each of their respective socials.