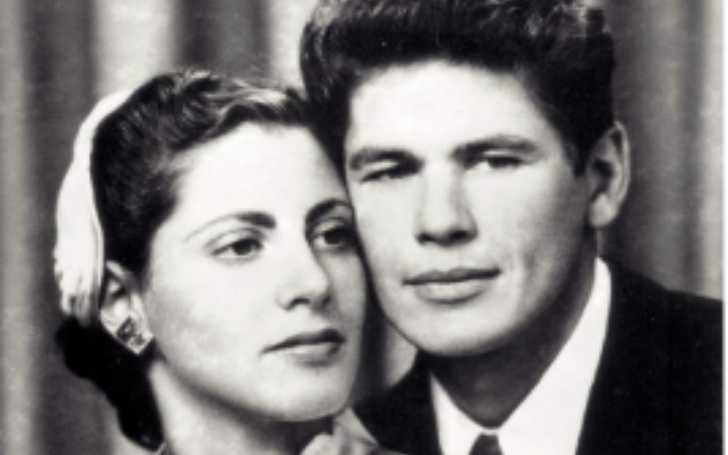 Harriet Tendler is an American radio host and an author who is more popular as an ex-wife of late Hollywood action star Charles Bronson. He is most known for his action and war movies like; Man With a Camera, 4 for Texas, Guns of Diablo, and many more.

Apart from her career, she is a proud mother of two. She has these children in a marital relationship with her then-husband, Bronson. The couple had a love marriage and she was the first wife of the actor. Though the duo’s wedding lasted for years, it couldn’t sustain it forever. So, what was the reason behind their separation? Did she move on with her new husband or boyfriend? What is she doing these days?

Have a look at the piece below to learn some interesting facts about Harriet Tendler (a.k.a. Harriet Bronson). Also know about her love life, age, children, and everything else.

The beautiful Harriet was born in 1929, making her age 93 years in 2022. She grew up in a Jewish family in Philadelphia, the U.S.A. Also, Harriet belongs to the Caucasian ethnicity and is an American by nationality.

Mentioning her parents, her dad was a thriving Jewish dairy farmer. However, she hasn’t revealed his name or her mother’s identity. As her father was mentioned as a “widowed farmer,” it is clear that her mother had died at an early age.

As a teenager, Harriet enrolled at the Bessie V. Hicks School of Stage, Screen, and Radio in her hometown, Philadelphia in 1947. It was there when she met the love of her life, Charles Bronson. Want to know more about their relationship? Scroll down!

Harriet Tendler And Her Ex-Husband Charles Buchinsky’s Decade-Long Marriage; How Did She First Meet Him?

Harriet was only 18 years old when she met her 26 years former husband Charles Bronson. His real name was Charles Dennis Buchinsky at that time, which he later changed to Bronson. As mentioned above, the two met in the school where Buchinsky was eight batches senior to her. They both wanted to pursue careers in acting.

Later, after dating for some time, the ex-couple decided to tie knots. Regardless, Harriet’s dad was not so happy with their relationship as Buchinsky was a Catholic and they were Jewish. In addition, the then-groom did not have a good source of income as well as he worked in a coal mine then. As a matter of fact, he only had four cents in his pocket on their first date.

Nevertheless, Harriet and her ex-beau were successful to make her dad agree. Tendler and her then-boyfriend Bronson finally walked down the aisle on September 30, 1949, in Atlantic City, New Jersey. She supported him in his hard times and they were together for more than a decade. Nevertheless, the pair separated in 1965.

Tendler Had  Two Children With Her Spouse

Even though the couple parted ways, Harriet and her partner Charles had two beautiful children during their marriage. Following their nuptials, the ex-duo eventually welcomed their first bundle of joy on 27 February 1955 and named her Suzanne Bronson. After a gap of six-year, the couple again gave birth to a son, Tony Bronson in February 1961.

Tendler raised her kids all by herself as her husband used to be out most of the days for his work. She stayed home looking after her children while her ex-partner was making his way through Hollywood.

Reason Behind The Divorce Of Harriet and Charles Bronson

Harriet did everything to support her husband during the struggling phase and raised their children alone. On the other hand, Bronson then had an affair with his co-actress Jill Ireland who was younger than him.

He became one of the most successful actors in Hollywood with his wife holding his back, but It was Jill who ended up coming in between. Yet, according to Harriet, the reason behind their detachment was not his affair with the actress, but the way her husband dealt with the fame.

Furthermore, the celebrity’s wife in an interview with WAMG even said that Charles was in the business only for the money. So he didn’t care about watching his work but was always into what was next.

Did Harriet Tendler Remarry After Her Divorce?

No, there is no information about her being engaged in a romantic relationship with anyone after her divorce. She was busy and happy in her career and did not feel the need for another partner.

Meanwhile, his ex-hubby went on to marry his co-actress Jill Ireland, whom he had an affair with. They wedded on October 5, 1968, and had one biological daughter Zuleikha Bronson. Unfortunately, she passed away on May 18, 1990, due to breast cancer at their home in Malibu, California, at the age of 54.

Charles Bronson again had nuptials for the third time in his late 70s in December 1998 with Kim Weeks. The couple was together for five years until his death.

While Charles Bronson’s health condition was getting worst each day in his later days, he also underwent hip surgery in August 1998. He then decided to retire from his acting career.

His reports cited the reason for his death to be pneumonia and Alzheimer’s disease. However, on his death certificate, it was said that he died of respiratory failure and metastatic lung cancer.

The legendary actor took his last breath at Cedars-Sinai Medical Center in Los Angeles. He is buried in Brownsville Cemetery in West Windsor, Vermont.

Tendler’s Health Is Also Not In Good Condition

According to Harriet’s interview with WAMG, she has been struggling with her health condition. She had Breast cancer and also lung cancer. Not only this, she underwent three surgeries for her broken femur. However, she is managing her old days somehow.

Even though Harriet Bronson wanted to become an actress, she ended up being a radio talk show host on stations in Los Angeles. Before that, she even worked as a salesperson in a store to support her ex-spouse and children. Since she was busy managing her job and kids, she never really got time to think about her career.

Regardless, she started her profession after her divorce from her ex-husband. Tendler had then put her acting career aside just to support her former partner’s struggling period, yet, she was betrayed. But as we say, everything happens for good, it helped her find her own voice and make her own identity.

She is also an author who has published three books including the latest “Charlie and Me.” According to her, though this book is about her and Charles, it is also about the first wives who marry ambitious men. It is about their suffering and the emotional battle they fight with.

What Is Harriet’s Net Worth?

Since Harriet hasn’t opened up about her total assets, we don’t know the exact amount of money she earns. However, according to multiple tabloids, Bronson’s first wife has amassed a net worth of $1 million to $5 million throughout her career.

On the other hand, her ex-hubby Charles Bronson had a total fortune of $65 million at the time of his death. In fact, he was one of the highest-paid actors in Hollywood charging $1 million per film.