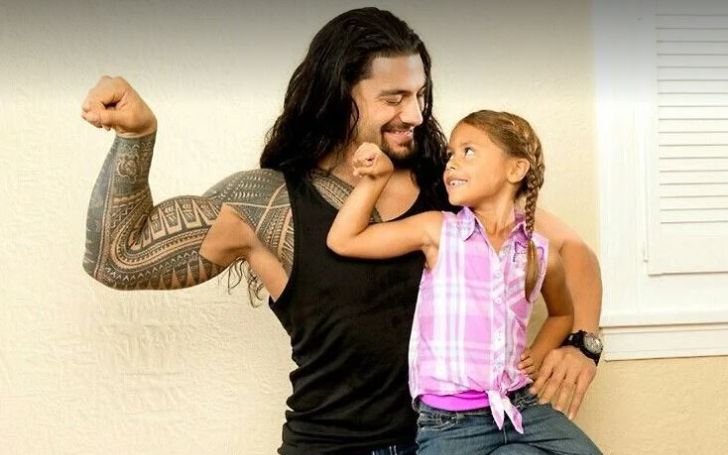 Joelle Anoa’i is the daughter of a WWE superstar, and ex-CFL and NFL, footballer Roman Reigns and his wife, Galina Becker. Reigns once said being the father of his children including Joelle who he calls JoJo is his most important job.

While Reigns may be one of the most polarising figures in WWE history, one thing about him that is undisputed is the fact that he is a family man. On several occasions, Reigns has referred to and mentioned how much his eldest daughter, Joelle means to him.

He once after winning the WWE World Heavyweight Championship 2015, took to Twitter to dedicate the win to Joelle wishing her the seventh birthday.

Down below lies many other likewise instances that show the strong bond between the current WWE Champion and his daughter. Also included are some notable times when Joelle had made it into the headlines.

The daughter of the longest-reigning WWE Universal Champion, Joelle Anoa’i who was born on 14 December 2008 in Tampa, Florida is currently 14 years old.

Reigns’ Career When He Became The Father Of Joelle Anoa’i

Reigns became the father of Joelle several years before his venture into wrestling. A month before his daughter, Reigns was a football player – having signed with the Canadian Football League’s Edmonton Eskimos for whom he played for one season.

He left CFL in November 2008, one month before his daughter’s birth. Almost two years after he became the father of Joelle, Reigns signed with the WWE in July 2010.

Joelle is the eldest of Reigns and his wife, Becker’s five children. Each two of her younger siblings are two sets of twins.

Her first twin siblings, two brothers were born eight years after her in 2016. Then in 2020, Joelle’s father Roman announced his wife, Galina was pregnant once again with another set of twins.

And in May 2020, Anoa’i became the big sister of another twin siblings, though Reigns is yet to reveal their genders.  Becker’s husband Reigns has said he would “love to” have more children and that he’s looking forward to eventually retiring and being at home for his wife and children most of the time.

When Joelle was the only child of Roman Reigns and Galina Becker, the former had said he was hoping to have more in the future. He had revealed the sentiment in an interview on Unfiltered With Renee Young.

“I would love to, yeah. My mom said a long time ago, ‘Babies are blessings,”

said the six-foot-three inches tall wrestler. He, at the time, also said after retiring from wrestling, he wanted to completely devote himself to being a father.

Roman Reigns Has Joelle Anoa’i In One Of His Tattoos

Among his massive arrays of inks, Reigns’ ink stains on his wrists include a little turtle tattoo that the ex-defensive tackle has camouflaged in the midst of his other arts. The tattoo, like many other of his art, carries a deep meaning.

The turtle mark, according to Reigns, represents his relationship with his daughter. In an interview, the Florida-born wrestler whilst explaining the meaning behind the turtle said,

“This tattoo is from my daughter, Joelle. It describes my daughter, who is present with me but no one needs to know. This tattoo was done by me on my wrist so everyone can see it.”

The turtle, in Samoan culture, symbolizes family, wellness, longevity, and peace. Reigns in an interview said he likes the tattoo on the inside ’cause not everybody gets to see that.’

The Time When Reigns Tried To Embarrass His Daughter, Joelle Anoa’i

Roman Reigns once made sure his daughter remained in the holiday spirit. During an appearance on an episode of The Tonight Show Starring Jimmy Fallon in Nov 20121, the Pensacola native shared a rare insight into his life as a father.

With Fallon, Reigns talked about the hilarious way he had embarrassed his then 13-year-old daughter, Joelle when dropping her off at school. Talking about the incident, Roman said,

“She’s about to turn 14, she’s the handful right now. She was explaining to me that right now the whole Christmas music before Thanksgiving is a big thing, they’re trying to cancel this whole situation and Mariah Carey, and that’s just crazy to me.”

Reigns then added how he made it embarrassing for his eldest by playing ‘All I Want for Christmas Is You,’ just as he was about to drop Joelle off at school.

The former CFL player said it made her daughter cringe especially given the fact that there were like five of her friends witnessing the whole situation.

Further just when Joelle thought she was in the clear, Reigns said his daughter “closes the door as fast as she can” until she realized “she has a project in the backseat” and her father turned up the music for a second time.

Joelle Appeared Alongside Her Father In A Commercial Video; Is She An Actress?

While she is not an actress, Joelle has acted once with her father for an ad. In 2014, Reigns and his wife’s first daughter, Joelle Anoa’i appeared with her father in a public service announcement.

This was as a part of a series of commercials of fathers with their children that ended with the message, “Take time to be a dad today.” The ads were from the sponsorship of the Department of Health and Human Services, and Titus O’Neil who has also appeared in one of their videos.

In the commercial video, Reigns has a tea party with his daughter, Joelle. The WWE later aired some behind-the-scenes footage on their YouTube channel, during which Joelle’s father talks about the importance of being a dad.

In the video, the father of five says,

“As a man, to be a successful father, that’s everything for me. If you’re having a bad day as an individual, wipe your schedule clean and have daddy-daughter time. That’s the type of stuff that helps me out and levels me out. If I just hear her little voice, I’m good to go.”

In the behind-the-scenes video, Rowena Patrick, the vice president of the Advertising Council, reveals Joelle Anoa’i was “very serious about her tea party.” Patrick remembered Joelle strongly despising sweet tea and iced tea when they asked her if she would like them.

Joelle’s Mother, Galina Becker, And Her Relationship With Roman Reigns

Joelle’s parents, Galina Becker and Roman Reigns met when they were studying at the Georgia Institute of Technology. Her mother was then a track and field runner while her father was a footballer.

They got engaged in Feb 2012 although they didn’t announce their engagement until early 2014.

They married in Dec 2014 on a private island, Castaway, in the Bahamas with a wedding song, A Whole New World from the 1992 animated movie, Aladdin. Joelle Anoa’i’s mother, Galina Becker is a former collegiate athlete who was her college’s team’s Most Valuable Performer in her freshman, sophomore, and junior seasons.

In fact, Becker still holds the Central Coast Section record in the triple jump with a mark of 40’5. She additionally was also the winner of regional titles during her sophomore and junior years there. During her college, the mother of Reigns’ children also completed the 60m hurdles in a season-best time of 9.48.

Galina was also a competitor in 100m dashes; during the 2005-2006 season, she performed at the Georgia Tech Invitational, running 14.92 in the 100-meter high hurdles. In addition to track and field running, Joelle’s mom, Galina also had a keen interest in volleyball and she was apparently a good volleyball player.

In 2015, Joelle sort of became a part of one of WWE’s short arcs when Bray Wyatt whilst feuding with Roman Reigns, actually used photos of her as part of his promo.

On the June 15th, 2015 episode of Monday Night Raw, which aired a few days before Father’s Day, the Wyatt family leader, Bray held up a photo of Reigns with his daughter, Joelle. While doing so, Wyatt also sang, “I’m a Little Teapot” to mock Reigns’ fatherhood PSA.

Responding to this, Reigns later revealed he wasn’t too happy about the WWE writer bringing his daughter into a feud. Joelle’s father when talking about this to Sam Roberts’ Wrestling Podcast said Wyatt showing the picture of his daughter was rough.

Reigns though added he wasn’t crazy about it since there was a reason why they did it the way that they did it. He further explained he was somewhat okay with Wyatt using the photo because it was just a picture of a commercial that aired on television.

The ex-Shield member implied he may have felt differently if Wyatt had held up a private photo of him and his daughter at home. The WWE later nonetheless dropped the idea of Wyatt threatening Roman’s daughter.

Joelle’s ethnicity includes Samoan, English, Italian/Sicilian (from her father), and Afro-American (from her mother).

Her father, Roman Reigns has an estimated net worth of over $12million.