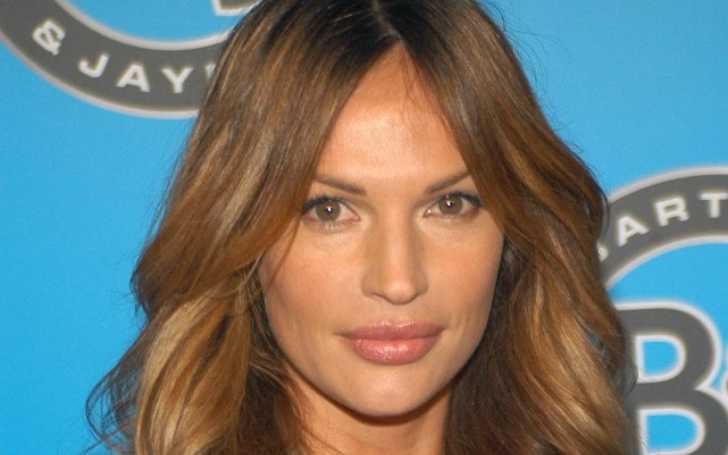 Jolene Blalock is a retired American actress and model. She is widely famous for playing the role of Vulcan officer and science officer T’Pol on the United Paramount Network science-fiction series Star Trek: Enterprise.

She was smooth on her way to becoming the next icon in the Hollywood industry. However, things changed and she vanished from the media and public sight and has remained so for the last few years.

Keep scrolling to know more about Star Trek’s rise to fame and how she became a has-been public figure, including the reasons for Blalock’s disappearance and her personal life.

Jolene Blalock was born Joelene K. Blalock on the 5th of March, 1975, in San Diego, California, the United States of America, holding the birth sign Pisces. As of 2022, her age is 47 and she stands at an average height of 5 feet 7 inches or 170 cm tall.

Blalock’s parents raised her in her hometown alongside her three siblings. She spent her early life surfing and developing artistic skills.

In one of her interviews, the 47-year-old talked about her childhood and revealed herself as “awkward-looking”. Likewise, she also stated that she never had any friends in school and during her lunch breaks, she used to go to work at the library because the kids in her school would not play with her at all.

Jolene Blalock Started Her Career As A Model

San Diego-born Jolene began her professional journey as a model. When she was 16, she left home to pursue her modeling career in Europe and Asia. During her struggling years, she appeared on the covers of various men’s lifestyle magazines including twice in Maxim’s ‘Girls of Maxim’ gallery.

Now retired actress then posed for a cloth fashion layout in ‘Playboy’ in April 2002. The next year, she was listed as the 10th sexiest woman in the world by ‘FHM’ Magazine. Following that, she was even interviewed by the magazine for its 20 Questions section.

Back in the late 90s, Jolene Blalock was on a trip back to the United States, this is when she thought to try her luck in acting. She went to Stella Adler Academy and Toronto’s Second City Improv and Second City Los Angeles in order to sharpen her skill.

In the year 1998, the former model debuted with NBC’s Veronica’s Closet. After that, she appeared in some episodes of television series like Love Boat: The Next Wave, Good vs Evil, Jason and the Argonauts, and CSI: Crime Scene Investigation.

Between 2001 to 2005, Blalock made a breakthrough playing Vulcan’s first officer and science officer T’Pol in Star Trek: Enterprise. After earning the role in her dream project, she shared the screen with stars like Scott Bakula, John Billingsley, Dominic Keating, and Anthony Montgomery.

Why Did Jolene Blalock quit acting?

Back in 2017, Jolene appeared in the television movie A Man for Every Month playing the role of Brenda. Since then, she left acting prioritizing her personal life.

Who Is Joelene’s Husband? Where Did The Couple Meet?

Jolene is currently married to Michael Rapino. Her husband is a Canadian-American business executive who is famous as the Chief Executive Officer (CEO) and President of Live Nation Entertainment, Inc.

Talking about their love life, Blalock met for the first time in the year 2002, in Los Angles. During their first encounter, Michael booked her for a commercial where they felt a connection between them.

After that, the duo immediately started dating. They had a long-distance relationship for almost a year as the actress used to reside in LA and her then-boyfriend lived in England.

As mentioned, Jolene and Rapino were in a long-distance relationship and they found it difficult to maintain for them. Not giving up on the love of her life, the Star Trek star finally proposed to him while she was on a vacation in Jamaica.

After Michael said yes, the couple exchanged wedding vows on April 22, 2003, during the same trip. Their marriage ceremony was a private affair held in Negril, Jamaica.

Jolene and her partner Michael are proud parents of three sons. After 7 years of their marriage, they welcomed their first child, Ryder James Rapino on May 25, 2010.

A couple of years later, they were again blessed with a son named Rivers Rapino in 2012. Finally, the star couple completed their family after welcoming the youngest child, Rexton Rapino in 2014.

Where Is Joelene Blalock Now?

The mother of three kids Joelene currently resides in Los Angles, California, the United States. As per Virtual Globetrotting, she bought a 4,710 sq feet mansion for $2.85 million in December 2003.

As of now, Blalock lives a blissful life with her spouse and children in her LA mansion featuring 3 bedrooms and 4 bathrooms.

San Diego native has not only won the heart of millions with her acting but also with her philanthropic work.

She alongside her life partner Rapino founded the Rapino Foundation. The charitable organization aims to help populations in the developing world.

Is Jolene Blalock On Twiiter?

Star Trek: Enterprise’s alum is not available on Twitter. But she is pretty active on Instagram under the name @jol3ne with 25.9k followers.

Also, Jolene has a LinkedIn profile where she describes herself as an independent entertainment professional.

Jolene Blalock Is A Multi-Millionaire: What Is Her Net Worth?

The retired actress-model is super rich as she was one popular actress during her active years in the industry. As per Celebrity Net Worth, Jolene Blalock has a net worth of $30 million in 2022.

On the other hand, her entrepreneur spouse, Michael Rapino is worth $120 million and earns a salary of $9 million (5-year contract base salary in 2017). The CEO of Live Nation gained $70 million in total compensation in 2017 which was enough to make him one of the highest-paid executives in the USA.