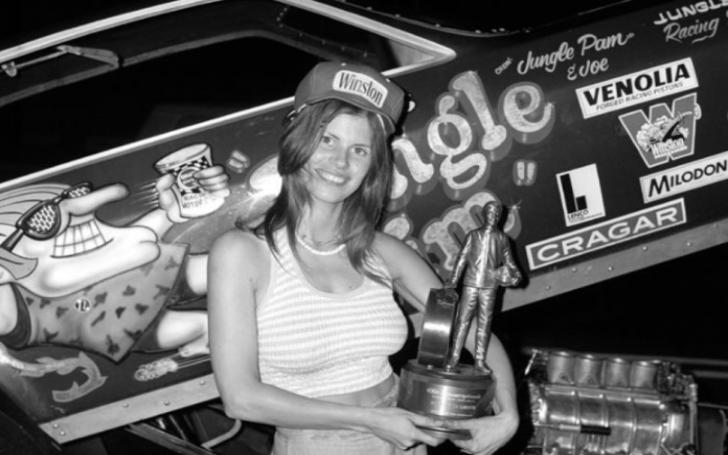 Jungle Pam Hardy is famous for being the sidekick of the drag racing sensation ‘Jungle’ Jim Liberman. Not only this, but she also gained the limelight for her relationship with her later boyfriend Liberman. Hardy earned the name ‘Jungle Pam’ because of her performance and love for drag racing sports.

Before meeting Liberman, Pam didn’t know anything about drag racing. Many drag racing fans around the world want to know about, the famous sidekick. So, who is Jungle Pam Hardy? How did she get into the drag racing world? Where is she now? There are a lot of curious minds and unanswered questions revolving around it.

So, in this article let’s discover more about Jungle Pam Hardy’s career, age, net worth, and her life in drag racing.

She was born Pamela Hardy on March 19, 1954, in West Chester, Pennsylvania, the United States. As of 2022, she is 68 years old. She was born in an ordinary middle-class family, however, she has so far kept details about her father and mother secret.

Talking about her ethnicity, she has a mixed ethnical background and is American by nationality.

Talking about her education, she has a decent academic background. After graduating from high school, hardy intended to have a degree in business and was accepted to West Chester State until she decided to ditch her college and pursue a career in drag racing.

Jungle Pam Hardy’s Career as a Sidekick For Jim Liberman

She is famous for being the sidekick of the drag racing star Jim Liberman. So, how did her journey begin?

Pamela Hardy was walking down the road when Liberman spotted her driving a yellow Corvette in May 1972. Hardy was 18 at that time and was two weeks away from graduating high school. Before meeting Liberman, Hardy was living a normal and ordinary life and didn’t know anything about drag racing.

In fact, she learned everything about drag racing on the job. The soon-to-do Master in Business left her degree and joined Liberman in his match race tour. She later recalled:

I ditched the college that had accepted me, and it drove my mother nuts.

Jim initially hired Pam to get attention on the track. She was usually braless and wore a tank top or skimpy halter and jeans. Her extraordinary performance drew a lot of crowd and attention. She along with Liberman appeared in Vrooom!, (a 16-minute documentary directed by Ken Rudolph). The pair also appeared in several magazines; she was on the cover of Hot Rod magazine in February 1973.

Palma Hardy earned the nickname “Jungle Pam” Hardy as she staged the car, checked for any fluid leaks before the run, and filled the car with water and eight quarts of 70W oil. Not only that, but she also helped in packing the parachutes and helped Jim reposition his vehicle after each burnout.

Because of her performance on the track, she was reported as “a stroke of genius”; helping to raise the profile of Liberman along with his team and Funny Car racing as a whole.

As we talked about earlier, Liberman hired Hardy to get the attention of the crowd. Similarly, while drag racing was booming, the sport added more rules and regulations eventually leading to a situation where Jungle Pam was left without a spot on the team. After her lover’s death, she never worked with another driver.

However, even after leaving the sport, she hasn’t left totally. Hardy’s love for the sport is seen as to this date. She makes occasional appearances at sports events.

On the other hand, she has openly talked about how she hates modern drag racing. According to her, modern drag racing lacks the factors of entertainment. She talks about the time when Jim was around and how it used to be fun in the past.

Russell James Liberman aka Jungle Jim was born on September 12, 1945. Known for being an American funny car drag racer, he started his career in drag racing in the Stock division at Fremont Raceway in the year 1964 and later made his way to funny cars in 1965.

Jungle Jim Died at the age of 31

Liberman undoubtedly would have had more success in the industry but sadly he passed away on September 9, 1977, in a road accident. The ex-boyfriend of Pam Hardy was driving his Chevrolet Corvette in West Goshen Township.

He collided with a transit bus while rounding a corner at high speed. The two vehicles crashed into one another and Jim’s car was wedged under the bus bumper killing him instantly. It took more than 45 minutes for the responders to extract his body from the crash site.

Being the sidekick of Jim for four years. Pam had a lot of respect for her former boyfriend, Jim. He was the one who brought her into the world of drag racing. She admires him and also said:

“All that showmanship was his true personality. He just didn’t turn that on at the track and then became normal like everyone else at home.”

He had that sort of flair even when we were just at the house or went out some place. You could always feel his presence wherever he was.”

Is Jungle Pam Hardy in a Relationship? Her Marital Status

She was in a relationship with her then-boyfriend and famous American drag racer Jungle Jim Liberman. But sadly, it didn’t last long because Jim lost his life in a tragic road accident on September 9, 1977.

Hardy was quite devastated after hearing the news but later she was in a marital relationship with the Funny Car owner Fred Frey. The husband and wife were living happily until due to some issue they decided to part ways.

Later on, Jungle Pam Hardy walked the aisle with her second husband Bill Hodgson. Unfortunately, their whereabouts at present are not known in the media.

Though she is married twice, there are no details on whether she had any children with her spouses.

The famous sidekick of Jim Liberman is estimated to have a net worth of $1.85 million which she has accumulated from her time in drag racing.

Whereas, her then-boyfriend Jim Liberman, was estimated to have a net worth of $2.5 million.

Where Is Jungle Pam Hardy Now?

Ever since the death of her former partner Jim, Pam gradually avoided appearance in the media. As of 2022, she has not appeared in the media for a long time. Moreover, she is also not on social media which makes it further difficult to track down her life at present.

However, we hope she makes a public appearance soon in the future.