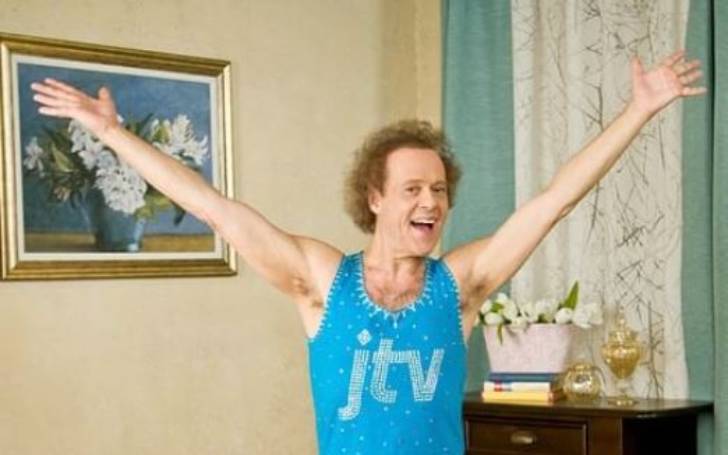 Richard Simmons is a 74-year-old fitness mogul and public figure who rose to the spotlight with his energetic, flamboyant, and athletic personality. He became popular for his aerobics workout videos and his wide exposure on television.

Simmons started doing workout videos in 1968 and was actively working until 2014 when he disappeared out of the blue. After this, people started conspiring with several speculations and theories behind his disappearance. Some even went to the extent of saying he was being held captive by his housekeepers, with some claiming his death.

However, after three years of complete silence and mystery, Richard spoke out revealing that he just wanted to take time off of the public’s eye. So what is Richard Simmons doing now? Is he still working as a fitness freak? Find out more about Richard Simmons here.

Richard Simmons Disappears From The Public Eye: He Is Alive & Kicking

In 2014, the flamboyant fitness mogul suddenly vanished from the public eye without any warnings or even a goodbye. At first, people thought it was some kind of pr stunt, however, after his studio was shut down in 2016, people started wondering and came up with various theories.

Simmons’ fans and followers even started assuming that he was kept hostage by his own housekeeper, while some came up with him being kidnapped by a burglar theory.

Fast forwarding to 2017, LAPD released a statement saying he is alive and doing good. In a statement LAPD said,

“Simmons is perfectly fine and is doing that he wants to do and it is his business” after they went for a welfare check.

Similarly, after a month, Richard himself released a statement saying “I’m not missing, just a little under the weather” assuring his fans that he was doing fine along with a picture of him.

“Hello to everyone who has shown concern for me and sent their good wishes. You will never know how much it means to me. Aren’t you sick of hearing and reading about me?! LOL Well by now you know that I’m not “missing”, just a little under the weather. I’m sure I will be feeling good and back home in a couple of days.”

Though the post was meant to be some kind of relief news, it gave a negative impact.  After a few fans noticed that the photo was from 2013, They began assuming that the person who posted the message was not Richard at all.

The post definitely made his fans worry more about him rather than have peace.

After six whole years of speculations and rumors, Simmons broke his silence regarding his break from the public eye via his spokesperson, Tom Estey.

During an interview with NY Post, Tom said that he is grateful for the continuous support and is living a happy and healthy life. He said,

“Richard is eternally grateful for the continuous outpouring of love and gratitude he has received from across the Globe, He is happy, healthy and living the life he has chosen to live.”

Moreover, Simmons himself posted, “Thank you, everyone, for your kindness and love. Love, Richard.” on his official Facebook profile.

The statement comes a few days after TMZ released a documentary, TMZ Investigates: What Really Happened to Richard Simmons on Fox and Hulu.

Real Reason Behind Richard’s Sudden Low-key Lifestyle? Was He Sick?

Although the fan-favorite told his fans that he was taking a break, a doctor revealed that the sole reason behind his goodbye was his knee problems.

“Doctors told him back in 2014 that he needed a left knee replacement, and if he didn’t get one, he might never be able to exercise again.”

“Now, this is key to the disappearance of Richard Simmons. The prospect of surgery, of becoming sedentary, caused Richard to sink into a deep depression.”

Similarly, back in 2017, Denise, a close friend of Simmons also revealed that the reason behind his hiding was his knee injury.

Being a worldwide-loved fitness celebrity, the fact that he won’t be able to do what he loves is undoubtedly too much to take for Richard.

Where Is Richard Simmons Now?

The 74-year-old media personality is living a very low-key and private lifestyle away from the spotlight in his Los Angeles house.

According to various sources, Richard still goes out shopping and likes to hang out on beaches. Although not a single media outlet and paps have managed to capture his outing, he still living and taking care of himself privately.

Similarly, his representatives also re-upload his contents on his self-titled Youtube channel in order to keep his fitness legacy alive.

Here Are Some Of The Most Heard Conspiracy Theories About Richard

According to Celebrity Net Worth, Simmons’ current net worth is around $20 million. He amassed his fortune from his successful career as a fitness trainer, media personality, and talk show host.

Did The Fitness Guru Richard Simmons Ever Marry A Wife?

The 74-year-old trainer has been in the spotlight for three decades and ruled the fitness world way before anyone. As he had a very busy schedule packed with hosting TV shows, traveling, running his own studio, and all, he surely never had a chance to start a family.

As many may understand by now that he really enjoys his alone time. Furthermore, no details of his affairs and relationships have hit the internet.

How Old Is Richard Simmons Now? Details Of His Early Life

His father worked in a thrift store while his mother was a traveling fan dancer turned cosmetics saleswoman. Likewise, he grew up alongside his older brother Leonard Jr.

He went to Cor Jesu High School which is an all-male college preparatory school located in New Orleans, Louisana.

After that, he went to the University of Louisiana at Lafayette before transferring to Florida State University and earings his BA in Art.

Though being born Milton Teagle, he settled with Richard as his stage/professional name after one of his uncles named Richard paid for his college tuition. During his college time, he appeared in two shows titled Satyricon and The Clowns.

Later in the 1970s, Simmons moved to Los Angeles in search of better opportunities and started working as a maitre d’hotel at a Beverly Hills restaurant, Derek’s.

Growing up as an obese teen, Richard grew fond of fitness, weight loss exercises, and more. He later ended up opening several gyms which eventually helped him lose 56 kgs or 123lbs unbelievably.

His exercise studio called The Anatomy Asylum (later renamed Slimmons) mainly focused on healthy eating habits with an enjoyable supportive atmosphere. The studio also featured a salad bar called Ruffage which was later removed as the studio’s sole focus was on exercise.

With the help of the internet and his very own establishment, Richard reportedly helped others lose approximately 5.5 million kgs or 12 million pounds during the peak of his career. The studio was shut in November 2016, two years after Simmons disappeared into thin air.

Apart from his fitness journey, he also hosted the Emmy Award-winning talk show The Richard Simmons Show during the early 1980s.