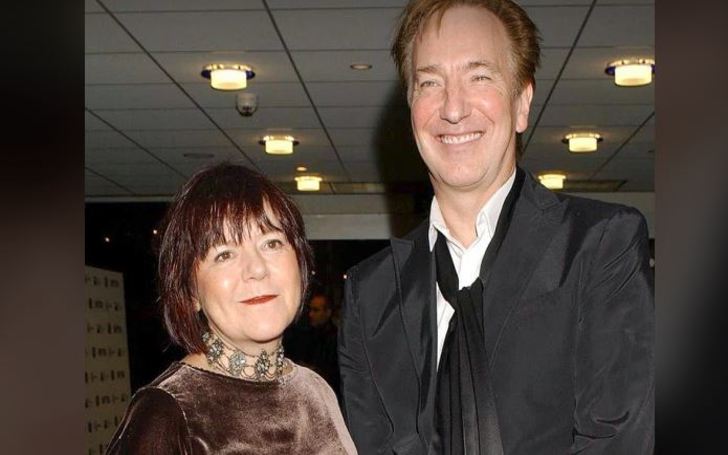 Rima Elizabeth Horton or Rima Horton is the wife of the late actor, Alan Rickman who is known for portraying Hans Gruber in the 1988 film Die Hard and Severus Snape in the Harry Potter franchise. Horton and Rickman were together for nearly 50 years until the passing of the latter.

As fans and industry continue to miss the loss of actor Alan Rickman, more details and curiosities about his wife Rima begin to surface. Even though his acting career was no-short of stellar performances, Rickman was able to keep his personal life relatively private.

Horton and Rickman have been together since the mid-60s. Some consider it to be an impressive record by any standards whether in or out of wedlock. Their fidelity to each other was no less than a legendary tale. So how did their relationship begin? Did they have any children? Also, did Horton remarry after the death of her husband Rickman?

Rima Horton Is From A Working Class Family

Her father was from London while her mother was Wales-born. The former Ms. Rickman attended the co-Ed private St. Vincent’s primary school, City of London School for Girls, and later the University of Southampton.

Rima performed in theatre at school and was also in several amateur groups, such as the Brook Drama Club that took her to Paris in 1962. She was only 15 at the time.

Her colleagues reported Horton had a strong presence and a real talent for directing the group. When she was 18, Rima won the Most Promising Youngster Award at the Southhall Music & Drama Festival, where her future husband Alan Rickman acted beside her.

Rima Horton Is A Politician And Activist

Throughout her career, Rima Horton became a politician and spokesperson for different organizations and parties.

In 1986 Horton won election as a Labour Party councilor on the Kensington and Chelsea London Borough Council. During her tenure, she served as its Chief Whip and a spokesperson on education during her tenure.

However, in May 2006, she lost her place on the council. This was in part to “the national shift” (in which there was a swing against Labour, who had been in government nationally for nine years by that point). She ran twice as a Labour candidate for Parliament but lost to the Conservative candidate both times.

Additionally, Horton worked as a senior economics lecturer at Kingston University in London. She conceded her retirement in 2012.

In 2002, she became the board of directors of The Making Place, a children’s charity. Horton stepped down from the position in 2005. Alan’s wife also served on the board of trustees of the Gate Theatre in Notting Hill.

Horton wrote a piece titled Inequality. This was for The Elgar Companion to Radical Political Economy in 1994. The writing contained three questions: whether people are “naturally equal in essence”; whether and when the redistribution of wealth is justified; and, if so, how much is “fair”?

Rima And Alan Rick Man Were Together Since The ’60s

Horton met her future partner Alan Rickman in 1965. They, both were then in an amateur theatre group at Chelsea College of Arts. Rima and the Die Hard actor were 18 and 19 respectively. HuffPost reports she was his first girlfriend. After twelve years of dating, they moved in together.

The couple tied the knot in a private ceremony in New York City in 2012. They, however, didn’t talk about their marriage publicly until 2015.

“We are married. Just recently. It was great because no one was there. After the wedding in New York, we walked across the Brooklyn Bridge and ate lunch,”

The Harry Potter said of his wedding.

Why They Took So Long To Get Married?

The couple lived together from 1977 until Rickman’s death in January 2016. The pair produced no children.

Alan often described his wife as incredibly tolerant and a possible candidate for sainthood. The late actor also revealed about a wedding band worth €190 that he had bought for his wife. He, however, disclosed that she “never wears it.”

The couple who had been together for more than 40 years reportedly decided to have a wedding only after Rickman’s cancer diagnosis. The actor died succumbed to the disease and died on January 14, 2016.

Why Rima Horton And Alan Rickman Didn’t Have Children

The Rickman couple didn’t have any children. Apparently, this was partly because of a testament to Alan’s respect for Horton’s wishes alongside his own, as well as his outspoken feminism.

In 1998 while talking to Guardian’s Susie Mackenzie, the Love Actually star said he was not the only one who had made that decision. He explained that there was another person, too, most possibly Rima. He though admitted he would have loved a family with three children, ideally.

Additionally, a friend close to the couple said the reason the Bafta winner and Rima didn’t have children themselves was that they came late to the idea of parenthood because of career reasons.

Rima Horton’s last mentioning was in Nov 2020 when it was announced that her late husband’s 27 something volumes of diaries were set to receive a book adaptation. At the time, Rima expressing her delight had said that Canongate was going to publish Alan’s diaries, and she couldn’t have wished for a finer appointment of an editor than Alan Taylor.

However, that was the last time anybody ever talked about Rickman’s longtime wife. It, nonetheless, is presumed that Horton is residing in the UK.

While Horton’s personal fortune never got to surface out in the open, she gained quite substantially when facing the tragedy of her husband’s demise.

As such when Rickman died of pancreatic cancer at the age of 69 in 2016, the actor left more than $5 million to his wife, as per Express UK.

Rima also inherited the bulk of her late husband’s UK assets. Apparently, she also got ownership of Rickman’s properties in America and Italy.

Additionally, the actor also left £25,000 each to the Royal Academy of Dramatic Art, Sponsored Arts for Education, the Facial Surgery Research Foundation, and the International Performers Aid Trust. Among the recipients were his three nieces who also received £25,000 each.