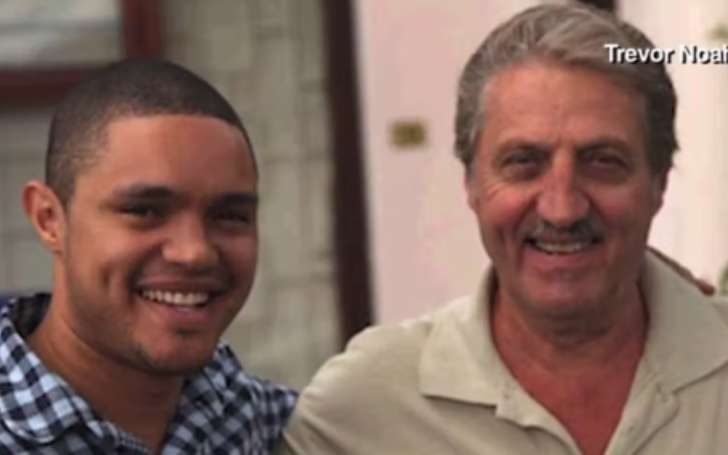 Robert Noah is a European with Swiss-German nationality who was a chef by profession. However, he rose to fame as the biological father of the South-African comedian Trevor Noah. He is also a television host, actor, and political commentator, and hosts The Daily Show, an American satirical news program on Comedy Central.

Robert, despite being a white man got into a relationship with a black woman during an apartheid era. He along with his partner Patricia even had a child together when an interracial relationship itself was considered a crime. Yet, they were able to raise the child despite all the difficulties.

On the other hand, Robert initially didn’t want the child and had denied having a baby with his mate Patricia. So, what made him change his mind? Was he part of parenthood? Was Patricia his wife or a girlfriend?

Read the article below to find out everything about Trevor’s biological father Robert Noah!

What is The Nationality of Robert Noah? Biography

Robert Noah was allegedly born in the mid-1930s and is also known as Robert Lloyd. So, as of now, he is in his mid-80s. Even though Noah is reportedly from Europe, he holds a Swiss-German nationality and belongs to white ethnic background.

Since Robert is not much of a media person, his information about the early details is still under wraps. He might have spent his childhood either in Switzerland or Germany, however, we are not sure of it.

Does Robert Noah Have a Wife or a Girlfriend?

As per our research, Robert Noah doesn’t have a wife yet. However, he was in a relationship with a black South African woman, Patricia Noah. He met her when Robert was working as a chef in Johannesburg and Patricia had just moved into Hillbrow during the 1980s.

Unlike other blacks of that period, Patricia was moderately educated, which is why she had a white-collar job. She was able to rent an apartment where Robert lived.

Robert and Patricia gradually started to spend time together as they lived on the same floor of the same apartment. The pair then became friends and also liked each other. Robert was twice the age as Patricia and they were nothing more than friends. Also, at that time, it was a crime for Africans to marry whites.

Regardless, Robert’s then-friend one night asked him to have a baby with her despite not being in a love relationship. She then also said, he doesn’t have to be in the child’s life or even pay for child support.

Initially, Robert denied the offer as he didn’t want Patricia to be in any trouble with the authorities. Nevertheless, he later agreed to her after she kept requesting him for the baby.

Robert and Patricia back then kept their relationship a secret for several months because of the circumstances. Eventually, the couple’s first son Trevor Noah was born on 20 February 1984.

Trevor Noah is now a famous comedian, television host, actor, and political commentator. He is also the host of The Daily Show, an American satirical news program on Comedy Central.

As we mentioned earlier, interracial relationships at that time were illegal. Therefore, the mother of the child had to lie to the doctors about the biological father of her child. If Patricia was caught, she could be jailed for 5 years and the baby would be placed in an orphanage. So, she told the doctors that the kid’s father was from another country.

Since Robert at first, didn’t want to have any attachments with the child, his ex-mate decided to move away from where he was staying. This way, she thought Robert would have less involvement in the upbringing of their child and their son will be safe as well.

Robert’s Involvement in Trevor Noah’s Life As a Father

Even though Robert didn’t want to be a part of his son’s life before, Robert changed his mind and searched for his child and the mother later. That’s why they decided to find a way out of united parenting.

Robert’s mate would take her son to the park and he would join them later when nobody is around. But when the baby got used to his appearance and started calling him “Daddy,” it made the situation difficult.

To cover things up, Trevor’s mother acted as a maid to his alleged parent who was a white lady. The lady lived in the same building and willingly helped Robert and his partner. This made it easier for Robert to visit his son and for Patricia to escape jail time.

After a while when apartheid ended, the family of three didn’t fear seeing each other. Robert would visit his son Trevor every Sunday and also celebrate his birthday and Christmas with him.  Furthermore, he would also cook his son’s favorite meal at such festivals. He was a very attentive and a good father.

Does Robert Noah Still Have a Relationship With His Son?

Yes, Robert Noah has a relationship with his son Trevor Noah. Though the father and son were distant for some years, they again reunited afterward. When Noah was 13 years old, he was already away with his biological dad. His mom had married another husband who was abusive and didn’t let them meet Robert Noah.

On the other hand, he himself also was a teenager who wouldn’t like to spend time with his parents. His dad’s visit to him lessened with time and eventually, they didn’t even see each other. Trevor then became busy with his studies and also started his career as a comedian. Yet, he would wonder about his father. But as the father and son didn’t have any contact, he “assumed Robert didn’t care about him and had moved on with his own life.”

Likewise, Robert’s partner always reminded Noah that his father chose to be in his life when it was safer for him not to be. She constantly encouraged him to find his father. Noah, in due course, found his father and they have a good relationship now.

Want to know how Robert Noah’s son Trevor Noah found him? Read the subheading below!

How Did Trevor Contact His Dad Robert Noah Later in Life?

As Robert is an extremely private person, there was no information about him. It was absolutely challenging for Noah to find him.

He first contacted the Swiss embassy but as Robert wasn’t noted as Trevor’s dad, they denied to help him. Trevor however convinced them to at least send a letter to Robert by his name. After months, he got a letter back and he soon flew to Cape Town without a due.

The father and son finally met again and though it was a little awkward in the beginning, they got used to it in time. They were after all seeing each other after 10 years. Noah had a faint memory of his dad but Robert was following his son’s career and was a proud dad.

After that meeting, Trevor felt his dad was always there even though he wasn’t physically there. Robert made his son all his favorite dishes once again and are currently on good terms.

Where is Robert Noah Now?

As Robert Noah likes to keep his personal life private, he hasn’t revealed anything about his life at present. Since he even doesn’t have any social media, his information is scarce.

However, he was in Cape Town when he met his son last time, so he might still be living there. On the contrary, Robert is allegedly a traveler who doesn’t like to stay in the same place. He had lived in Canada, New York, Western Europe, South Africa, and many other places.

But as of now, he hasn’t opened up about his current residence. Meanwhile, his son Trevor Noah lives in New York.