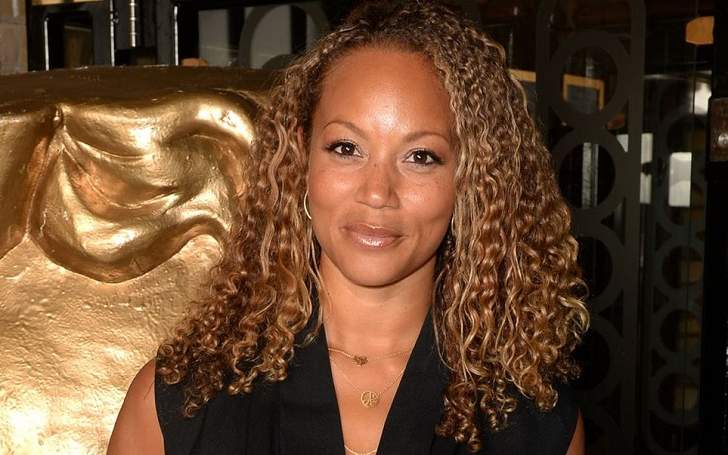 The notable face in the British TV industry since the early 1990s, Angela Griffin got a breakthrough from her debut role in the TV series Coronation Street.

Griffin has well-managed her personal life while still working in the film industry for decades. She lives a peaceful married life with her husband, Jason Milligan with whom she also shares two children.

Griffin was born on 19 July 1976, in Cottingley, Leeds, Yorkshire, United Kingdom. She is the daughter of Desmond Griffin (father), a New York welder, and Sheila Griffin (mother). Desmond is from Nevis, an island in the Caribbean Sea.

Her parents met while working on the buses in Leeds and started dating soon. They tied the knot in 1967. Her mother was 19 while her father was 29 at the time of their marriage. Griffin is close to her mother more than to her father. She frequently shares her photo with her mother on her social media. On 10 Jan 2020, Griffin took to her Instagram to wish her mom on the occasion of her birthday.

Happy happy birthday momma!!! @stekenang Love you so so so so much. What a mum you are. Have the best day and the best weekend. You deserve all of the good stuff in life.

Griffin was an infant when her parents divorced. Her mother later married her step-father but there is no information if her father remarried or not. She told The Guardian that her mother did a number of jobs to support her family following her divorce from her first husband.

Griffin is an English by nationality. She belongs to a mixed ethnical background as her mom is English while her dad is from the Caribbean.

What is Angela Griffin Age?

One of her mom’s best friend Auntie Linda took her to drama classes at Leeds Children’s Theatre at age five.

Furthermore, the actress portrayed Kim Campbell in the BBC drama series Waterloo Road (2006-07) and again (2009-10). Her extensive TV career gained further fame with a role in the ITV series Lewis (2014-15).

In 2019, Griffin played the character of Astrid in Turn Up Charlie. Well, as of 2020, she is a regular cast in British-Spanish mystery thriller series White Lines. The series stars Laura Haddock, Marta Milans, Jade Alleyne, and others in the lead.

Is a TV Host Too

In addition to her acting, Griffin served as a presenter of one of the UK’s Channel 4 programs that focuses on mixed-race people across the British territory in October  2001.

Angela also became the host of the live daytime show Angela and Friends on Sky 1. The show presented the blend of health topics and celebrity gossip from November 2009 to July 2010.

Angela tied the knot with her longtime boyfriend, Jason Milligan, on 27th July 2006. They held their wedding ceremony at Babington House in Somerset.

Their daughter Tallulah Milligan was a bridesmaid who was only two years at that time. Several of their family members and friends also attended the event. The couple celebrated their honeymoon in Crete, Greece.

Besides, the couple who has been together for around two decades are still leading a blissful marital relationship. Back in 2015, the actress told The Mirror that nothing would make them break up,

“We make each other laugh and are dead kind and nice to each other. Our family dynamic is the most important thing to us. There is nothing that could happen that would want to make me break that up.”

When did Griffin and Her Husband Jason Milligan First Meet?

The actress first met Jason through his stepbrother Max Beesley at the age of 20. But, nothing happened between them for the next six years.

Only in December 2002, they stepped out to spend a night out at the Wellington Club in Knightsbridge and since then, their years-long friendship turned into an undeniable romance forever.

The two dated for over three and a half years before walking down the aisle in July 2006.

They Are Blessed With Two Children

Angela Griffin and hubby Jason are proud parents of two. They welcomed their first child, a daughter, Tallulah Milligan on 13 June 2004, two years before their nuptials. Their second daughter named Melissa Milligan was born on June 1, 2007.

Tallulah has also followed her parents’ footsteps who worked in The Worts Witch (2017).

Besides, The happy family of four currently resides in north London.

Milligan is also an actor who initiated his career working in A Taste of My Life in 2006.  He worked as a narrator for the TV series Celebrity Wedding Planner (2013-14).

What is Angela Griffin Net Worth?

As per sources, Angela Griffin has an estimated net worth of $500,000 in 2021. She has predominantly collected the money through her acting career.