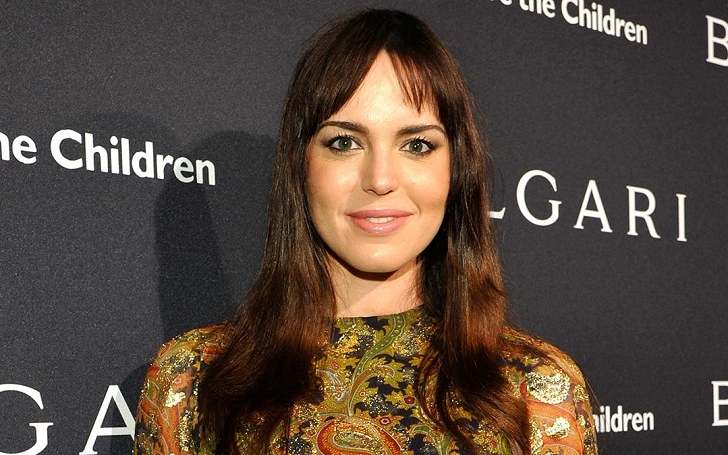 A charismatic and conscientious Spanish-American actress Marta Milans has performed effortlessly across all genres in the entertainment industry. The El embarcadero actress Marta got her breakthrough after her endearing role in the TV series No Tomorrow.

Besides her career, Milans also makes headlines with her relationship news. Milans’ love life went on to become a matter of interest after the actress was rumored to dating co-star Joshua Sasse. Apparently, the speculations ruined Sasse’s 18-month relationship with his then-fiancee Kylie Minogue.

Back in early 2017, Marta Milans’ alleged romance with Joshua Sasse became a hot topic in the media. Their dating rumors even led Sasse’s ex-fiancee, Kylie Minogue to call off their engagement.

The former couple announced their engagement on 29th Feb 2016. However, when their separation hit the media back in Feb 2017, Marta became the center of their split due to her reported closeness with Sasse.

The two first came across on the set of No Tomorrow, a comedy-drama TV series aired on The CW. Sasse played Xavier Holliday, an eccentric and free-spirited individual while Marta portrayed Sofia, an avid traveler, and photographer.

Despite the huge speculations, Marta and Joshua never talked about their rumored romance in the public. Meanwhile, Milans’ brother, Sander was asked about his sister’s growing proximity toward Joshua, however, he didn’t reveal anything about the probable relationship. He said,

“I have no idea what you’re talking about, no idea at all”

“I haven’t got anything to say because I don’t know anything. If I did, I doubt I would say anything anyway.”

“I know who Kylie Minogue is of course but I don’t know where my sister comes into all this. It’s something that’s totally foreign to me.”

Some tabloids even suggest that Milans and Sasse are just close buddies.

Is Marta Milans Married? Who is Her Husband?

Milans is yet to marry, neither does have a husband. But, we can say how good a wife she would make after watching her playing a wife’s role on-screen. Milans is praised for her role as Rosa Vasquez, wife of Victor Vasquez (played by Cooper Andrews) in the blockbuster movie Shazam (2019).

Marta and her onscreen-husband Cooper were the foster parents of Billy and his siblings on the project. She even mentioned him as the best movie husband on her Instagram post she shared on 18th August 2019.

When you bump into one of your favorite humans on the planet on a random flight out of LAX.. all you can do is smile like this. I love you @smugorange you’re the best movie husband on the f***ing planet !!! Can’t wait for @shazammovie part 2

But they are just professional colleagues off-screen.

Marta was born on 19th April 1982, in Madrid, Spain to father, Alfonso Perez-Andujar, and mother, María Cavestany Milans del Bosch. Her dad is a dairy farmer as well as the richest landowner while her mother Maria is a sculptor.

You are the ultimate legend. Always and forever. Te quiero Mumiiii

The actress also shares a deep bond with her 92-year-old grandmother who initially wanted her to pursue a career as a violist or as a prima ballerina. In fact, Marta had even begun playing violin by age three.

Marta holds dual citizenship, Spanish and American. She is a caucasian by ethnicity.

Grew Up With Her Twin Sister and Brother

Marta Milans has two siblings; a twin sister Gadea Pérez-Andújar and a younger brother Sander. Her sister studied Marine Biology at the University of Hawaii. She is now a jewelry designer based in Hawaii.

Her brother is a physicist who earned a master’s degree in wind energy in Denmark.

It spreads out in a 2,000-acre farm nestled in northern Spain.

Marta Milans moved to New York City as a teenager and attended New York University graduating with a double major in Art History and Acting.

Upon her graduation, Marta Milans went on to perform in local theatre productions. She scored her first role as Carol in the movie Love in the Age of Dion (2006).

The actress appeared in two short films Luchador Love in 2007 and Scandal in 2009 respectively. Her other silver-screen projects include Devoured (2012), The Disappearance of Eleanor Rigby (2013), and Asher (2018).

Marta is also credited for her work in small-screen projects alongside her success on the big screen. She portrayed Imelda Barros in Law & Order: Special Victims Unit in 2011. The actress performed in The Mysteries of Laura and High Maintenance in 2016.

Milans got rose to prominence as a television star after she played Sofia, a passionate world traveler, and an avid photographer in The CW’s comedy-drama No Tomorrow. She appeared in the project from 2016 to 2017 with her once rumored boyfriend Joshua Sasse.

Additionally, the actress plays Katia in El embarcadero since 2019. She snagged the role of Kika in Netflix’s series White Lines, sharing the credit along with Angela Griffin and Jade Alleyne in 2020.

What is Marta Milans Net Worth?

As per some online sources, Marta Milans has a net worth of $500,000 in 2021. She has predominantly earned such a good figure through her acting stints.

Furthermore, the actress is currently working in Russian. She told the Chicago Tribune about learning Russain “is becoming a daunting quest, but I am not giving up!”

Besides her work on films and TV shows, Marta has also kept herself busy working with some non-profit organizations. She supports Art of Elysium which aims to help such children who are sick and developmentally challenged in Los Angeles and NYC.

Other Unheard Facts of Marta Milans

Who Is Andrea Duro? Her Parents, Relationship With Boyfriend Chicharito