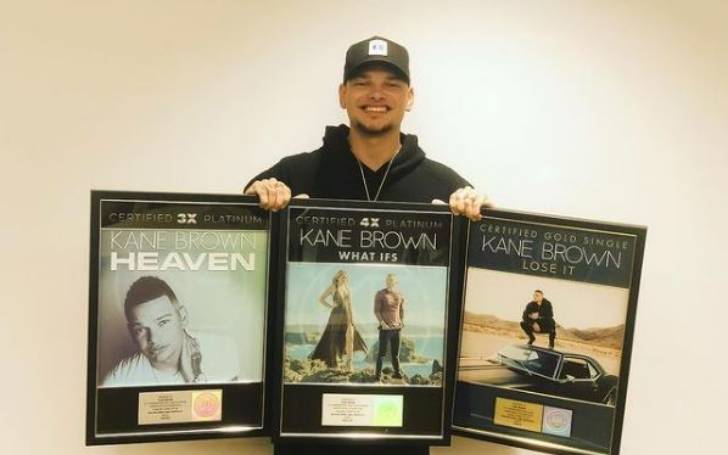 Kane Brown is an American singer who rose to prominence with his EP Closer in 2015. He later signed with RCA Nashville and went on to release some of the hit songs of his career.

As of 2022, he has released three studio albums titled Kane Brown, Experiment, and Different Man. Though Kane started his musical career only in 2014, he has won the hearts of many and has a huge fan base.

With his growing career and fame, people automatically get curious about his personal life. Hence, we will talk about some unknown facts about Kane, especially his parents. So tag along with us to know more about his family, childhood, father, wife, and children.

Kane Brown Was Born To His Parents In United States

Singer Kane Allen Brown was born on 21st October 1993 in Chattanooga, Tennessee, United States of America. He will turn 29 years old in 2022.

Brown grew up alongside his sister Heidi Swafford and his mother in rural northwest Georgia and Chattanooga, Tennessee area. As his family moved around a lot, he attended different schools which include Lakeview Fort Oglethorpe High School, Red Bank High School, and Soddy Daisy High School.

As many readers may not know, Kane is a multiracial born to a white mother named Tabatha Brown and an Afro-American father. As per reports, Brown’s father is also part Cherokee descendant.

While we can spot Kane’s mother Tabatha in a few of his posts and social media, his father is nowhere to be seen. Did you ever wonder why?

Well, Brown’s mysterious father was imprisoned back in 1996. The reason behind his jail time was never revealed and he is still serving his time.

Due to this, Kane never had a father figure in his life. He even mentioned not having a father in one of his posts alongside his newborn daughter. He wrote,

“I grew up without a dad so I’m gonna be the best one I can be! Love you baby girl”

Brown Was Bullied For Being A Biracial

Since Kane Brown’s parents had an interracial marriage, he is multiracial and because of this same reason was bullied and made fun of for his identity while growing up. He also revealed that he didn’t know he was a biracial child until he was 7 or 8 years old.

On top of that, he even got into fights due to bullying and all the teasing.

“I thought I was full white… I found out that I was biracial, and I still wasn’t thinking anything of it, but then I started getting called the N-word … I learned what it meant, and that’s when it started affecting me.”

Back in 2016, Brown’s younger sister Heidi was brutally stabbed around the neck and the shoulder by another girl.

As per reports, the two got into a heated argument which quickly turned into a bloody war after the other person took out a knife. Heidi was reportedly stabbed four times around the neck area.

She was quickly rushed to a local hospital where she got her treatment. It was revealed that her injuries are non-life-threatening, however, she may sustain a permanent nerve injury.

During this time, Kane was in Nebraska for a show. Upon hearing the news, he posted on Facebook and asked his fans to pray for his sister’s speedy recovery.

How Did Kane Brown Become Famous? A Look Into His Profession

The 28-year-old first started getting interested in R&B music after listening to country music for a while. As a youth, he auditioned for both American Idol and The X Factor and was chosen for The X Factor.

Sadly, he left the show after he was asked to join a boy band by one of the producers of the show. After this, he began uploading cover songs online and garnered a huge following.

He released his debut EP entitled Closer on 2nd June 2015 and it reached no.22 on the Top Country Albums chart. Shortly after this, he signed with Sony Music Nashville and released his second EP titled Chapter with hit songs Used to Love You Sober and Last Minute Late Night.

After six years, Brown dropped his third studio album called Different Man on 9th September 2022. The album has hit songs like One Mississippi, Like I Love Country Music, and Thank God.

Singer Kane Brown Is A Married Man- Who Is His Wife & How Did They Meet?

Yes, you read it right, Thank God Singer is currently married to the love of his life Katelyn Jae Brown. The couple first met around 2014 through a mutual work friend and clicked right away.

After talking for a while, the pair went official with their relationship. And two years later, Jae and Brown got engaged in a very unromantic yet cute proposal.

A few days after popping the question, the American singer talked about his proposal plans and the real proposal with People.

He reveals to the magazine that he popped the big question to his then-girlfriend whilst watching a horror movie, The Amityville Horror. Even though he had a perfectly planned proposal plan the following day, the singer couldn’t resist his urge and just asked her to marry him.

Obviously, Jae said yes. They got married on 12th October 2018 at Mint Springs Farms in a fall wedding ceremony. Their wedding was held in Philadelphia, Pennsylvania,

Kane Brown Children: Came Up With The Name Kodi At A Gender Reveal Party

As the husband-wife both have a name starting with the letter K, it is of no surprise that they named their daughters with the same initial letter. After welcoming their firstborn, Brown and Jae named her Kingsley paired with the middle name Rose.

And when the pair were getting ready to welcome their secondborn, Kane came up with the name Kodi. Initially, they were planning to name their second child Knight hoping that it was gonna be a baby boy.

As soon as the pair found out about their second child’s gender, they finalized her name with Kodi Jane Brown during her own gender reveal party. She was born in Dec 2021 weighing 7 lbs and 9 oz and measuring 20.5 inches long.

Leave You Alone singer earns his fortune mainly from his singing career. As of 2022, his net worth is around $6 million. His endorsement deals, sponsorships, concerts, and merch line also add up a decent amount to his wealth.

Who Is Notti Osama? His Bio, Death, Girlfriend, Net Worth