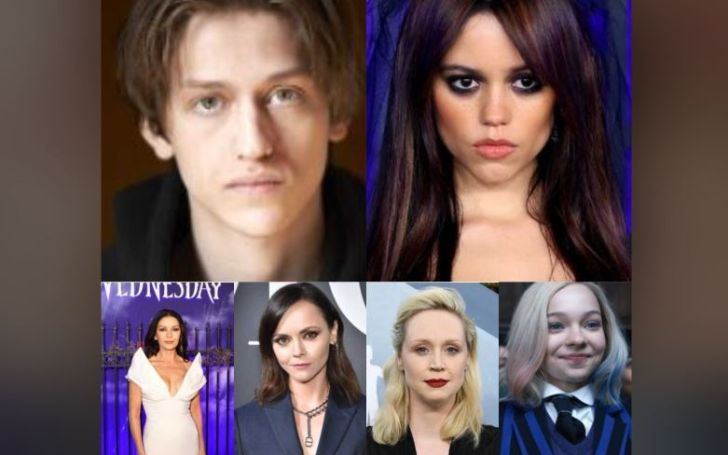 The recent Netflix hit Wednesday is enjoying its share of popularity buzz and giving additional attention to each of its casts. The show follows the story of one of the members of the Addams Family, Wednesday, and her time in her new supernatural boarding school Nevermore Academy.

Hollywood has a norm of getting curious about the dating contentions of emerging or just-became-popular celebrities as soon as their projects become new sensations. Such has been the case with the casts of Wednesday recently. While there are several names from the series whose dating life has been apparent to outsiders for some time, some have been extremely private in that regard. Consequently, the need for answers has been a pressing issue.

Unfold each of their love life circumstances whilst also knowing who their current wives, husbands, girlfriends, or boyfriends are.

Luis Guzman Wife: He Is Not Dating But Married

Guzman plays the Addams Family patriarch on Wednesday. While he portrays Catherine Zeta-Jones Morticia’s husband, Gomez Addams in the recent Netflix hit, in reality, Guzman is the husband of Angelita Galarza Guzman. The couple has been together since 1985. They are also parents to seven children. Unfortunately one of the couple’s children died when Angelita was delivering the baby. The Guzman pair would lose their first child due to complications in Angelita’s pregnancy.

Guzman’s longtime wife Angelita isn’t as upfront to the media as her celebrity husband. This celebrity spouse lives quite off the radar.

Who Is Gwendoline Christie Dating?

Christie who plays Nevermore’s Principal Weems in Wednesday has been in a long-term relationship with fashion designer Giles Deacon since 2013. Christie and her partner have also collaborated on a project together. It was Deacon who designed Christie’s wardrobe for her role of Lucifer in Netflix’s adaptation of The Sandman.

Despite being in a relationship for this long, Christie and Deacon are yet to get married. Gwendoline’s boyfriend, Deacon is originally from County Durham and has won many awards such as British Fashion Designer of the Year, 2006. In fact, Giles is one of the most sought-after English designers.

Who Is Fred Armisen Dating?

In the past, Massachusetts-born 56-year-old, Fred Armisen was husband to personalities like singer Sally Timms and actress Elizabeth Moss. Armisen most recently was also in a relationship with the Russian Doll actress Natasha Lyonne. They however ended their romance in April 2022.

Armisen was first in a courtship with Sally Timms from 1998 to 2004. Following that separation, the Zoolander 2 actor tied the knot with the Handmaiden actress Elisabeth Moss in 2009 but the two ended their marriage in 2011. With Natasha, Armisen had started the relationship sometime in 2014.

Fred is now in a relationship with his Wednesday costar and the Hell Baby actress Riki Lindhome. They apparently started their relationship in the summer of 2022.

Who Is Riki Lindhome Dating?

Armisen’s current partner, Lindhome is also one of the cast of Wednesday. The 43 years old Lindhome plays the role of Dr. Valerie Kinbott on Wednesday, the therapist of the show’s titular character.

It however is unclear when Armisen and Lindhome became a couple though the latter first shared the picture of Armise on her Instagram in July 2022. Also in December of that same year, Fred and Lindhome bought a property worth $4 million in Los Feliz, a hillside neighborhood in the greater Hollywood area of Los Angeles.

Lindhome also became a mother to a son in March 2022 which the actress revealed via her Instagram. It however is unsure and unannounced if Armisen is the biological father of Riki’s son.

The Big Bang Theory actress Lindhome in the past allegedly had a relationship with the Balls Out actor, Nick Kocher. The two also costarred in the 2012 romantic comedy film Much Ado About Nothing.

Who Is Christina Ricci Dating?

Ricci herself gained fame by playing Wednesday in one of the previous adaptations of the Addams Family. The actress however now plays Marilyn Thornhill in the Netflix version.

Ricci also isn’t a new face in the media world. Some of her personal matters have been storylines of several news stations and journals. Ricci garnered quite a public scrutiny in 2013 when she battled a bitter separation from her ex-husband James Heerdegen. The actress whilst filing for divorce from Heerdegen accused him of physical and emotional abuse. Despite that, they still share a son, Freddie whom Ricci welcomed in 2014.

Christina is now married to a British celebrity hairstylist Mark Hampton with whom the actress also has a daughter, Cleopatra.

In the 2022 version of the Addams Family, Ricci stars as Marilyn Thornhill, the series’s main antagonist.

Who Is Jenna Ortega Dating In Real Life?

The details regarding Ortega’s relationship are perhaps the most private affair among the casts of Wednesday. She nonetheless occasionally comes under speculation for having relationships with many of her co-stars. Even before she bolstered her prominence through Wednesday, the actress was linked to several actors of her age. Some most talked about beings were the singer and social media personality Jacob Sartorius and the Andi Mack actor Asher Angel.

However responding to the aforesaid hearsay, Ortega, in Feb 2019, said she dated none of them including some other names that were on the suspicion list.

Even now, the Wednesday lead seems to be all single. However this time, too, she is being linked with her current costar Percy Hynes-White who plays Xavier Thorpe in Netflix’s black comedy thriller. Yet again, neither of the supposed pair has given any indication of a romantic ambiance existing among them.

Who Is Hunter Doohan Dating?

The 28-year-old actor from Fort Smith Arizona actor Hunter Doohan plays Tyler Galpin, one of the teenage love interests of the lead character on Wednesday and he is also among the cast who have found their happily-ever-after off the screen. Hunter is currently in the second year of his marriage with the movie producer Fielder Jewett. The pair marked their betrothal during the  2020 COVID-19 lockdown and the two celebrated their marriage in June 2022.

Doohan plays Tyler Galpin on Wednesday. His character is the secondary antagonist of the first season and is also a known Hyde.

Who Is Emma Myers Dating?

Similar to some of the casts from Wednesday, Emma Myers has also refrained from giving the details of her dating life. She hardly has talked about anything from her offscreen love stories.

What’s more, since she has close to ten million followers on Instagram, it’s probable that she’s just being too careful about what she’s sharing on her social media. If that’s the case, even if Myers is dating behind closed doors, it might be a while before her fans get to know who he or she is. As happens with celebrities of her stature, most of the time, they tend to keep their personal affairs to themselves for quite a long haul.

On Wednesday Myers appears as a werewolf student of Nevermore Academy. She furthermore is the roommate and best friend of Ortega Wednesday.

Who Is Catherine Zeta-Jones Dating?

Zeta-Jones who plays Morticia, Wednesday’s mother in the eponymous show is famously married to the Basic Instinct actor Michael Douglas. In fact, her marriage to Douglas is one of the long-standing unions in Hollywood. The couple has been together for some 22 years now. Together they also share a son Dylan and Carys.

While Douglas and Zeta-Jones have been husband and wife for over two decades, back in 2013, they had separated briefly before reconciling the same year. They have also been regular companions of each other on numerous red carpets.

Before Douglas, Zeta-Jones was also in alleged relationships with celebrities like John Leslie, David Essex, and Mick Hucknall.

Who Is Naomi J Ogawa Dating?

The 23-year-old, Ogawa also has less than no details obliging to her dating activities. Although the actress of British Japanese parents has a rather upfront and busy Instagram that shows just about everything she does on and off the screen, none, so far, has given so much as a hint as to who her significant other or boyfriend might be. Or it could be that Ogawa is being exceptionally good at hiding her personal matters.

Ogawa portrays Yoko Tanaka, a Vampire Student on Wednesday. The actress once revealed that her first audition for the role of Yoko went badly because she didn’t show enough confidence. However, Ogawa later recorded a tape and dispatched it to the producers, and eventually got the part.

Who Is Percy Hynes-White Dating?

The six foot one-inch tall 21-year-old actor Percy is also among the cast of Wednesday who has little to nothing to say about his dating experiences. While Hynes-White is the hot subject of Ortega’s relationship talk, the actor is yet to address the doubt himself.

In the past, however, Hynes-White was supposedly in a relationship with his former co-star, Katie Douglas. They allegedly though have since broken up.

Hynes-White is a Canadian actor who has had credits in films and TV shows like The Gifted, Pretty Hard Cases, Edge Of Winter, Age Of Summer, Our House, and others.

In the Netflix series Wednesday, Hynes-White stars as Xavier Thorpe, one of the psychic students at the Nevermore Academy.

Who Is Georgie Farmer Dating?

Farmer also falls under the heading of young celebrities who have made it ridiculously difficult to pinpoint their love affairs. While the new A-listers such as Georgie Farmer likes to show a lot of their off-the-screen pursuits to their social media followers, when it comes to spilling the beans about their partners, they plunge into complete shyness.

While it is unknown who Georgia’s current or past girlfriends are, a while ago, the Englishman did reveal something about his worst dating experience. It was back in Dec 2022 during an interview with Holly Wire.

Speaking of his past dating experience, Farmer admitted to going on a few. He additionally also mentioned his worst when he reportedly had gone to a movie with a girl. According to Georgie, that night, neither of the dates however talked to each other. Farmer told Holly Wire that he and his date didn’t exchange a single word the whole time they were together, except for how good the movie was. When the interview asked Georgie if this particular person knew whether he was a celebrity, the 20-year-old said,

No. I don’t know about that.

Having known that, one can be rest assured that this Wednesday star at least has gone on several dates and some of them very well may have ended in some form of a relationship.

In the meantime, Farmer plays the sweet, soft-spoken Ajax Petropolus on Wednesday. Farmer’s character, Ajax is also a Gorgon.

Logan Lerman Girlfriend in 2023: All The Relationships He Cherished