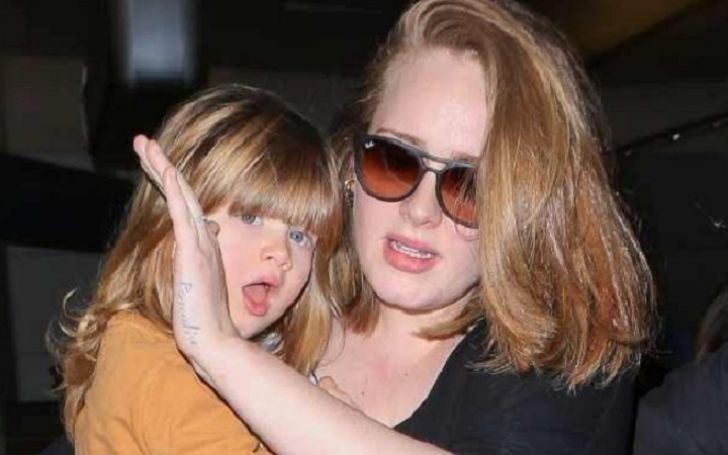 Angelo Adkins is the son of the renowned British singer Adele. The artist whose full name is Adele Adkins has released a number of major hit albums and singles. Her prolific career in the music world has earned her a plethora of prestigious accolades, including fifteen Grammy Awards and nine Brit Awards.

Adele shares her son with her ex-husband, Simon Konecki. His parents married for a couple of years before their marriage dissolved into a divorce.

Let’s take a look at many interesting facts that you didn’t know about Adele’s son!

His age is 8. He was born on 19th October 2012, in the United Kingdom. Angelo’s parents used to live in West Sussex at the time of his birth. Keeping the baby’s birth ultra-private, the singer didn’t make any official confirmation for some time.

Furthermore, a spokesperson for Adele told Daily Mail, “we are not releasing a statement at this time.”

Meanwhile, following the birth of Angelo, the ‘Hello’ singer went through postpartum depression. In a conversation with Vanity Fair in 2016, Adele revealed about the phase. She said,

“I had really bad postpartum depression after I had my son, and it frightened me.”

“I love my son more than anything, but on a daily basis, if I have a minute or two, I wish I could do whatever the fuck I wanted, whenever I want. Every single day I feel like that.”

Talking about the pregnancy, Adele announced it on her blog in June 2012, five months before the baby was born. She said,

“I’m delighted to announce that Simon and I are expecting our first child together. I wanted you to hear the news direct from me, obviously we’re over the moon and very excited but please respect our privacy at this precious time. Yours always, Adele xx.”

The Grammy Award-winning artist prefers to keep her baby boy behind closed doors. Back in 2013, Adele and her then-boyfriend Simon filed a private case against agency Corbis Photos UK for publishing intrusive paparazzi pictures of their kid taken during their public outings in 2013. The couple’s solicitor said The Guardian,

“It is a matter of profound sadness that many of his milestone moments, such as his first family outing and his first trip to playgroup, were photographed and published worldwide expressly against his family’s wishes. The parents’ view is that these images were of routine, everyday family occasions which the paparazzi has no right to intrude upon, profit from and file away in picture libraries for future reference and use.”

According to The Guardian, the duo won the case and received a five-figure settlement.

It’s been nearly nine years since their baby boy came into this world, however, the singer has yet to share a single photo of their kid.

Adele is quite close to her son Angelo. In 2016, talking about the experience of being a mother with Vouge, the artist said,

“[Angelo] makes me very proud of myself. When I became a parent, I felt like I was truly living. I had a purpose, where before I didn’t.”

Despite being one of the most successful singers, Adele even became a stay-at-home mother for some time for the sake of her son.

Back in early 2020, a source close to her told People that the artist is heavily involved with her son’s school works.

Parents Married Years After His Birth

Back in mid-2011, Adele and Konecki started dating. A year after they were in a relationship, the former flames were said to be married but the artist denied the rumors via a Twitter post,

Again, in early 2017, the rumors regarding their marriage started swirling on the internet when Adele and Konecki were spotted wearing matching rings on their ring fingers. This time, however, the artist confirmed the speculation as true referring to Konecki as “my husband” during an acceptance speech at the 59th Annual Grammy Awards.

Despite their long-time union, it didn’t go for long. In April 2019, a representative for the singer announced to the Associated Press that the couple separated after around eight years of togetherness.

Adele reportedly filed for divorce from Konecki on 13rd Sept 2019 and their divorce was finalized in March 2021.

Although Adkins’ parents have kept him quite grounded, sources say, they are doing a fantastic job for the sake of their son even after their separation. Furthermore, since they share joint custody of their son, they are living across the street from each other for the benefit of their child.

Has a Half-sister from His Father’s Previous Relationship

Angelo has an older half-sister from his dad’s previous marriage to Clary Fisher. Simon has kept his daughter away from the media as Angelo.

Besides, talking about Angelo Adkins’ father Simon, the ex-celebrity spouse is the CEO of a charity organization Drop4Drop. It provides clean drinking water to a number of developing countries.

Being the son of a famed artist who has sold over 120 million records over the years, Angelo is undoubtedly enjoying a pretty lavish upbringing.

Not to mention, Angelos is years from earning a fortune himself. But, talking about his mother, Adele has a whopping net worth of $190 million in 2021. She has earned such a considerable fortune from her splendid musical career. The artist has a number of sprawling properties throughout the United States. She owns a house in Beverly Hills, which the singer bought for around $9.5 million back in 2016.