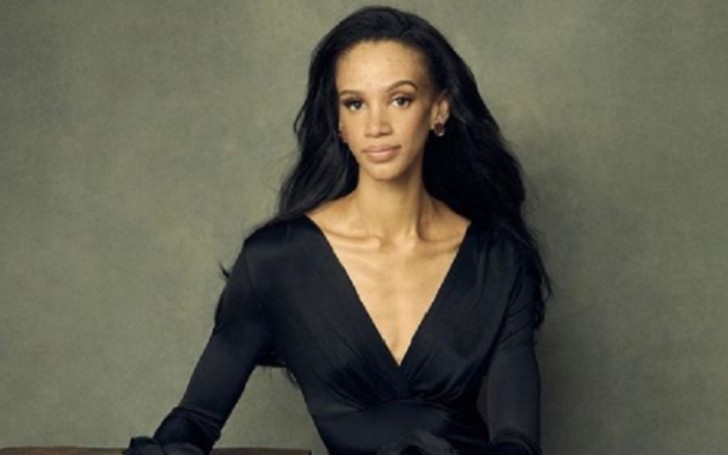 AjaBleu Oldham (aka Aja Bleu) is the daughter of a popular film and TV actress Kimberly Elise. In addition to being a famed celebrity kid, Oldham has been doing a fantastic job in several fields like financial services, beauty, and entertainment industries. As of now, she is a marketing manager at Bernstein Financial Services Inc.

Talking about her love life, AjaBleu is in a beautiful relationship with her boyfriend for a few years now. To know more about Kimberly Elise’s first-born daughter, take a closer look here!

What is AjaBleu Oldham Age? Her Early Life and Parents

Her age is 31 as of 2021. Oldham was born on 16th March 1990, in the United State of America, to Maurice Oldham and Kimberly Elise. Being the daughter of successful actress Kimberly, AjaBleu enjoyed a wonderful childhood.

Besides, her nationality is American and belongs to a mixed ethnical background.

Has a Younger Sister

Oldham grew up along with her sista, Butterfly Rose Oldham, born in October 1998. The Oldham sisters have shared a strong bond with each other and they often share an adorable photo of themselves on their socials.

As a matter of fact, both of them are animal lovers. They have a German Shepherd whom they named “Miles.”

Oldham went to The University of Paris, in France in 2008 and obtained a Bachelor of Arts in Art History and Psychology from the college in 2010. A year after her graduation, Aja went on to join The New School in Manhattan and received her degree in writing and psychology in 2013.

What does AjaBleu Oldham Do? Her Professional Career in Detail

Oldham is an accomplished marketing manager with extensive knowledge and experience in several digital marketing fields such as SEO, web design, video, email, and brand strategy. She currently serves as a manager in Bernstein Financial Services Inc. She joined the company back in October 2020.

Before joining Bernstein Financial Services Inc, AjaBleu had already worked for a number of organizations. She spent the majority of her career, working as a marketing strategist at Kimberly Elise Natural Living, a blog and newsletter for over six years (May 2014 to July 2020).

She co-founded the blog along with her mother Kimberly and other friends back in 2014. It aims to inspire people to live a purposeful life. Furthermore, the blog is highly devoted to natural beauty, plant-based ingredients, and spiritual health.

Furthermore, Bleu worked as a marketing coordinator at Z Living Network for around a year, where Oldham produced digital extensions for a fitness and health cable television network. She also spent a year at Escrow of the West, in Beverly Hills, California as per her Linkedin profile. There, AjaBleu served as a marketing manager, developing traditional and digital marketing strategies for the organization.

Is a Budding Model Too

In addition to all that, AjaBleu has tried her hands in modeling who featured on the cover of Alpha Female Magazine in September 2019.

At the same time, Oldham also popped up along with her mother for the magazine.

Who is AjaBleu Oldham Boyfriend?

AjaBleu is dating a boyfriend John H for over a few years now. Oldham first came with her beau back in October 2020, sharing a photo of themselves on Insta with a caption,

“Thank you for treating me to the Jewels #Mariinsky #ballet. I loved every minute of my day with you (including the ridiculously long drive to pick up Miles from Lancaster after the show). You’re the most wonderful gentleman & partner. I love you.”

Besides, back in March 2020, amid the first wave of Corona Virus, Oldham was seen, celebrating a birthday with her beau. Other than that, the information regarding their love life remains a little bit private.

Her parents Kimberly and Maurice Clifton Oldham tied the knot back on October 20, 1989. Their wedding ceremony was held in Minneapolis, Minnesota. The two led a happy marital relationship for around sixteen years before they divorced in 2005. However, Kimberly never revealed how her marriage dissolved.

What is the Cause of AjaBleu Oldham’s Father Maurice Clifton Oldham?

Maurice died from a “massive blood clot” on 17th May 2007. His Memorial Service was organized on May 26, at Agape International Spiritual Center. Born on December 30, 1958, in Princeton, New Jersey, Oldham was an elite photographer and the owner of MTalent Photography.

Net Worth Details of AjaBleu Oldham