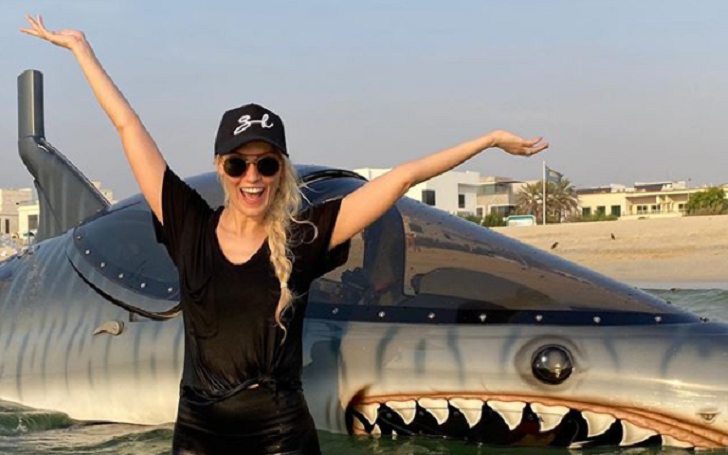 From the past few years, a number of young stars and many other people use the burgeoning social media world as their profession. Today we are talking about one of the highly successful social media influencers Alexandra Mary Hirschi (known as Supercar Blondie).

The lady has been dominating the digital world with millions of fans following on many social media accounts. Widely known for her finest reviews of supercars, Blondie has also made a cool net worth from her career.

Let’s know her journey from radio station to the automobile world that started with just 300 Instagram followers. And Alexandra has now nearly 10 million followers on Insta. Well, in this article, we will also talk about Supercar Blondie’s husband Nik Hirschi and their enduring matrimonial relationship!

Supercar Blondie was interested in cars since Her early days

Blondie was born on 21 September 1985, in Brisbane, Australia. Her passion for motorcar emerged very early. She said that her parents used to go on long-way road trips and it was the initial factor that influenced her in the automobile world as well. She stated,

I’m not sure why that is [the passion for cars], but I think it comes down to two things – coming from a driving culture, and having parents who love to drive.

Alexandra and her family went on several 12-hour road trips in the country. She also has a sister named Kate.

Besides, talking about her nationality, Blondie holds Australian nationality and is white as per her ethnicity.

The first car Alexandra ever owned was Mitsubishi Lancer. Before being exposed to supercars, the blondie beauty enjoyed Lancer on the streets of Queensland. It also helped her to shape up her skills further in the automobile world.

Alexandra was a radio show host in Dubai

Alexandra Mary Hirschi got enrolled at the Queensland University of Technology and studied Journalism & Business. Following her graduation, Hirschi went to Dubai and started working on Dubai Eye 103.8, a radio talk show as a newsreader and presenter.

In the meantime, Supercar also co-hosted a drive time talk show for several years as well as learned how to entertain and inform her audience. She worked on Radio for several years before leaving the job in 2017, to invest her entire energy into the industry of automobile.

During her time at the Radio, Blondie also took interviews with several well-known celebs such as John Travolta and Jake Gyllenhaal.

Her First Super Car BMW i8

Supercar Blondie after made her move to Dubai bought her first supercar BMW i8. She posted a number of short videos and photos of her riding with the car on the streets of Dubai to her ever-growing audience. She later, however, sold it and moved on to Lamborghini Huracan.

Listed Her Lamborghini for Sale too

Alex Hirschi after BMW went on to explore Lamborghini Huracan LP610-4. She later named the supercar Lucy which was also modified by several colors. Blondie showcased it on many of her Youtube videos and photos that were uploaded on Youtube, Instagram, and Facebook.

Nonetheless, Supercar announced her goodbye to the car vai her Facebook in Feb 2020.

Her Appearance on Top Gear with The Stig

Back in 2019, Supercar Blondie appeared on the popular British car show Top Gear along with The Stig, the mysterious skilled driver of the show. She got the opportunity to pop up on Top Gear while the production crew visited Dubai to film its one episode.

Supercar initially didn’t have any plans to start out her career as a social media star. But when the car lover was invited by Bentley to attend and report on a drive event for their new Continental GT in Jan 2015, they also offered her to drive the Flying Spur W12 for a week. The experience Blondie later shared on social media accounts. At the time, the blonde beauty had less than 500 followers on Insta.

But after a positive response and growing fan following on social media, Blondie decided to pursue her old dream. In 2018, Blondie’s Facebook page was also named as the featest-growing auto page of the year. She has garnered over 22.6 million followers on the account as of 2020.

The social media icon has collected large fan followers within a short period of time on social media after her sudden switch into the world of automobiles. She has over 9.1 million followers on Instagram.

Similarly, the blonde beauty from Queensland runs her YouTube channel under her name Supercar Blondie. It has amassed over 6.64  million subscribers as of 2021.

Blondie shares her personal experiences of driving and reviews of the newest cars making short videos on the channel. On 30th December 2019, she posted the video called “Top 10 Craziest Concept Cars 2019” which has earned over 33 million views to date.

Here is the clip check it out,

In 2018, the popular American men’s magazine Esquire Magazine Middle East announced Supercar as an Influencer of the Year. She also writes for the publication under its motoring column.

What is Alexandra Mary Hirschi Net Worth? Earned $2 Million Yearly

Supercar Blondie has an estimated net worth of $7 million. She has earned the majority of her wealth from her social media career. As per sources, Blondie makes $2 million in a year.

Furthermore, from her Instagram, the social media star can make $45,175 per sponsored post. She previously worked on radio and was paid around $70,000 a year.

Blondie’s husband Nik Hirschi surprised his wife with a $470,000 Ferrari 488 Spider on the occasion of Valentine’s Day in 2018. The vehicle looked extra special by its decoration with red, white, and pink roses as well as pink and red balloons.

Alex has been married to Nik Hirschi for a long time now. Her hubby Nik currently is a managing partner at Supercar Blondie. He also has a great passion for cars.

The man previously spent over one and a half decades in the corporate world. He first landed a job as a bank apprentice for Valiant Bank AG in Switzerland in 2001. He left the company in June 2005. Nik later began his summer internship at the Standard Chartered Bank (Jul 2007-Sep 2007).

Hirschi then worked as a graduate analyst at Barclays Wealth (2008-10). In August 2011, Nik became the senior account manager of Bloomberg and worked for more than three years until October 2014. In the meantime, the banker was designated as the head of sales & executive board director of SGDA and spent 1o-month at the organization.

Furthermore, Hirschias also served as a business development manager for Misys and business director for Thomson Reuters before started working with his wife.

How long has the couple been married? Do they have any children?

Supercar Blondie and her husband Nik are married for several years now but the couple never revealed when the two exactly tied the knot. They both attended The University of Queensland. Judging by their social media post, it looked like they began dating even before they went to college.

Blondie has posted a number of anniversary posts with her husband on Instagram tributing to their years-long togetherness. On 25th Jan 2019, the social media influencer uploaded a selfy with Nik on the occasion of their 16th anniversary. She captioned the photo,

“Our anniversary! 16 years later, crazier than ever. Love you @nikcars.”

It’s been years since they are together and their relationship is still going pretty romantically. The couple often appears exploring several beautiful destinations around the world. In June 2019, Supercar was spotted experiencing the Quad bike ride in Dubai along with her hubby.

However, despite their years-long journey, they have yet to have any children. The couple currently resides in Dubai with their puppies named Mugi and Pepito.

Who is Nik Hirschi? Marital Relationship With Wife Supercar Blondie