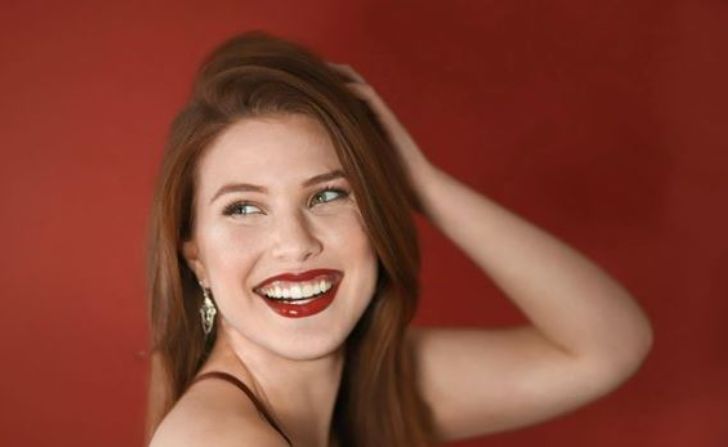 Ali Astin, fully, Alexandra Louise Astin is an actress, singer, songwriter, model, and yoga instructor. The mostly theater artist, Ali is better known as the daughter of The Lord Of The Rings and The Goonies actor, Sean Astin and his wife, Christine Harrell.

Excluding her father’s spotlight, people regard Alexandra as a talent to awe for. Several critics likewise refer to her as someone who makes the show worth seeing. The viewers have often admired the Californian-born stage performer for her in-depth knowledge of some of the best actors.

She is almost always in character and embodies an empowered escort with a commanding stage presence and her artistic connections to the message of feminism. Get an extended version of her life as a stage hotshot, her Hollywood relations, a bit into her personal face; whether she has a boyfriend, partner, and so forth.

The first child of Sean and Christine, Alexandra “Ali” Astin was born on November 27, 1996.

From her father’s side, she is descent of an Ashkenazi Jewish family. Her late grandmother, Patty Duke, the best actress Academy winner was Irish, as well as one-eighth German.

Alexandra’s parents, Sean and Christine have been together since 1991.

They met when her mother, Christine, the former Miss Teen Indiana, was an assistant at Special Artists Agency in Beverly Hills and she had to meet up with the Goonies star.

Sean and Harrell married each other in July 1992 and together are parents to three daughters, including Alexandra.  The five-foot-four-inches tall Ali is the eldest sister to Elizabeth Louise and Isabella Louise.

She Is Also A Model

The red-haired daughter of Christine and her longtime husband started modeling at 16.

In the present, Alexandra, however, is more passionate about embracing fitness and body positivity as well as empowering others. She advocates for a healthy lifestyle through yoga, hiking, pilates, and a balanced diet.

Meanwhile, she is also completing her second yoga teacher training.

Ali Astin Is Also A Singer; Has Released An Album

Astin and Chris’ eldest daughter has been singing for as long as she can remember.

Alexandra started singing professionally as a member of the SCCT regional theater in California. She performed in more than a dozen musical theater ensembles during her 6 years in the company.

Thereafter, the actor for the live audience continued her passion for singing in choral ensembles, an acapella group, and often as a solo artist throughout her young life and continues to sing regularly as a solo artist. Not to mention, she has also released an album titled, Take 1.

She is primarily credited as an indie-pop singer.

The Ivy League student is also into body movements.

This too reportedly started when she was very young. As a child, she studied Tap, Jazz, Ballet, Lyrical, and Modern Dance. After studying with David Zibalese of the Diavolo Dance Theater in High School, Alexandra learned to dance at Harvard University with an emphasis on movement for the stage.

One other thing that her resume tells is Ali is also a writer.

She apparently has written for T.V. & Film as well as for the stage (plays, musicals, and devised work). In fact, Alexandra was 15 when she began writing music for her first album — though not published.

How She Started Her Theater Career?

She also was an art student at NYU Tisch, New York, and Ludwig Solski Academy for the Dramatic Arts, Krakow, Poland.

As for her professional beginning, the now 25-year-old, Alexandra started acting on stage with SCCT Regional Theater and since has gone on to perform in several productions across the country.

Her summer 2018 theater play, The Rental went on to receive acclaim from critics and viewers alike. Ali’s other notable theater projects include Theater Much Ado About Nothing, This Is Our Youth, First Day Of School, Nine: The Musical, Chatroom, and Arcadia.

She additionally has been in the plays, Of Carnage, The Nightfall Hotel, and Disney’s High School Musical On Stage.

In addition to performing, the Golden State native has also helmed some theater projects. On the list of her theater directorial are the plays such as The Branch, The Cockfight Play, On The Nose, and Romeo And Juliet.

Further, the west coast resident is also an artistic director for the Stella Adler Repertory Theater in Los Angeles.

While mostly a theater thespian, the daughter of the Rudy actor has also been on the big screens.

Her IMDB page lists her as the cast member of films like Bad Kids of Crestview Academy (as Ethel), Apocalypse Society (Marie), Two Rings (Alice), and Before There Were Rings (Alice).

She also voiced The Princess in the 2014 animated film, Ribbit. What’s more, her Harvard profile says she is soon going to appear alongside The Office star Steve Carell in a top-secret project in fall 2022.

The green-eyed actress is also set to star in the upcoming true-crime suspense pic, The Man in the White Van.

In the movie based on the true story of Brooksville, Florida, in 1974, Ms. Astin is acting alongside her father, Sean, and actors such as Ali Larter and Madison Wolfe.

Her Other Works Besides An Entertainer

Besides theater and acting, Alexandra has also done some behind the scene chores for multiple showbiz corporations. For starters, she was a Project Development intern at her actor father’s company, Lava Entertainment.

After that, The Rental actress served respectively as a voice talent management intern at crest animation studios, a production assistant at Momentum Pictures Inc, and an Audio Production Project Manager at Colorblind Fish Music.

Other sectors where Harrell’s first daughter has worked include The Pitiless Peach Theater Company and Stella Adler Academy of Acting.

In mid-2020, the occasional voice-over actress was also a visiting assistant professor at John Hopkins University and an audio producer at Audible.  Ali furthermore has TISCH Certification in Cinematography and Film/Video Production from New York University.

She is currently a creative executive for children’s content at Lava Ent. Worth mentioning is she also did coursework in Family Literacy And Early Literacy Development from Penn State University.

Was Ali Astin In The Lord Of The Rings?

She did appear briefly as Elanor in the director, Peter Jackson’s Lord of the Rings: Return of the King.

Ali Astin played Elanor Gamgee, the daughter of Sean Astin’s character, Samwise Gamgee in Jackson’s The Return of the King, the final scene.

Side Fact: At the end of filming of LOTR 3, Alexandra got to keep the dress she wore in her scene. The dress, however, was apparently several sizes too small by then.

Turns out the bae of Alexandra is also a student at Harvard. Ali first introduced the 10th place finisher, Wong to her Ig followers in November 2021.

Adam’s first picture on the play-actor’s Instagram shows him bending backward alongside his apparent red-haired girlfriend.