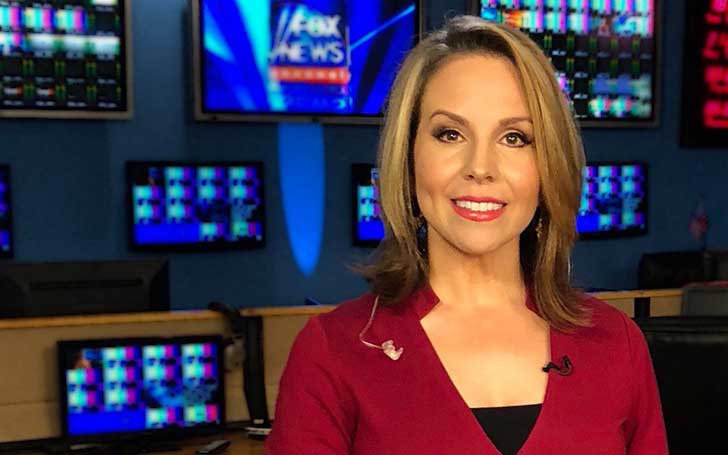 Alicia Acuna is a popular on-air personality who became part of several known networks before securing her coveted spot on FOX News Channel. She currently serves as a general assignment reporter for the network.

Besides, Acuna maintains a successful married life with now her husband Brian Daniel Boyd. How many do they have children?

Let’s know everything about her professional and personal life.

Who Are Alicia Acuna Parents? Her Background and Wiki

Alicia Acuna was born on 27th Mary, 1970, in Whittier, California. She spent the majority of her early days in the southern parts of Arizona and California.

She’s a third-generation Mexican American. Her parents both consider themselves Chicano. Alicia’s mom and dad divorced when Alicia was 13. Following their separation, her dad relocated to San Diego.

Acuna spent most of her vacations and holidays on the beaches of California with her father. On 17th March 2020, she posted a picture of her dad on Insta, in which she disclosed tragic information that he has been diagnosed with surgical cancer.

But, the old man is now recovering from the battle. We wish he recovers as swiftly as possible.

She is a Northern Arizona University Graduate

Alicia Acuna attended Tucson High Magnet School, graduating in 1988. She then joined Northern Arizona University, in Arizona and earned a bachelor’s degree in Journalism and Broadcasting. Later on, she landed a job at NBC’s assignment desk in San Diego, CA. While working there she was a task manager and also came in as a runner-up at the 1997 AFTRA columnist of the year title.

Some time afterward, Acuna found out that her college Arizona Uni’s radio station, U-TV is hiring. She went to the audition was subsequently selected. Alicia worked there throughout her college year.

‬‪ Following her graduation, she went on to receive a fellowship with the International Radio and Television Society (IRTS). She also interned at CBS News, in New York City.

Alicia Acuna kick-started her journalism career, working as the assignment editor at the NBC station. The then new-face in the media field initially wanted to be a field producer.

Acuna also suffered debilitating shyness before applying for a reporter job at KGET-TV (NBC), in Bakersfield, California. She was an anchor of its 5 p.m. and 11 p.m. newscasts. Furthermore, she served as a weekday anchor and reporter for KSEE-TV (NBC) in Fresno.

Alicia Acuna made a major breakthrough after joining Fox News Channel (FNC) in 1997. She is currently a general assignment reporter based in the network’s Denver, Colorado news bureau.

Acuna has covered several major news for FNC including the Ebola outbreak’s reporting live from Dallas, Texas, a devastating earthquake of the May 2013, EF5 tornado from Oklahoma, and more.

Moreover, Acuna also played a vital role in the 2012 Presidential debate at the University of Denver and the 2008 Denver Democratic Convention coverages.

What is Alicia Acuna Net Worth and Salary?

Alicia Acuna has earned a considerable fortune from her years-long media career. Her net worth is $500,000 as of 2020. Sources suggest Acuna is paid over a salary of $76347 a year from Fox News Channel.

Alicia exchanged vows with Brian Daniel Boyd in April 2004. The couple is living a happy married life, standing together through thick and thin.

Her husband Brian was once a cancer victim but the man is now free from the disease. On 6th May 2019, Alicia posted a photo honoring Brian’s 10-year cancer-free journey. She wrote,

“Happy ten years cancer free to @briandboyd ❤️ Your quiet dignity and strength is something to behold. We are so very grateful and love you so much ❤️❤️❤️”

Alicia lives a great life with her two children and husband

Several sources report Alicia and hubby Brian have two children. But, the couple is yet to reveal whether Brian is the biological father or not.

Alicia welcomed her first child, a daughter named Sofia Orozco in April 2004. She gave birth to their son Mario Orozco in September 2006.

Besides, Acuna is the proud mom of three other step-children Aidan Boyd, Noah, and Daniel. They currently reside in Pueblo, Colorado.

They also have two dogs named Scout and Henry.

Alicia wants youngsters to be brave and courageous

Alicia is one of the best reporters out there. She started out young and along the way she came across several hurdles. Despite all the hardship, she made her way to the top.

This makes her true inspiration for all the youngsters out there who wants to get in the reporting world. For them, Acuna has a special message. She says,

“I encourage young folks to look for an experience where they can get it. Whether it’s by internship, fellowship, or entry-level position, it will help in ways that are unimaginable.”

She further adds,  “As I’ve learned, your industry friends and co-workers are the ones who will help you. One other thing, keep your mind open to unexpected opportunity and encouragement. In my case, it worked, and I know countless others who climbed high because they tried something they didn’t think they could do.”