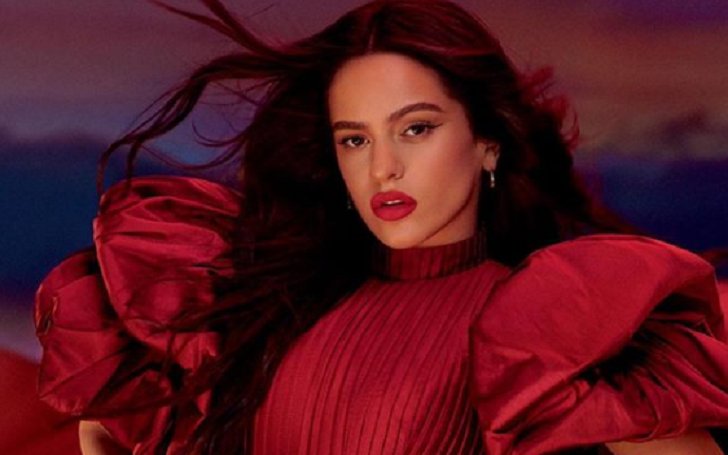 Rosalía Vila Tobella simply known as Rosalia is one of the quickly-established artists in the music world- thanks to her rule-breaking musical style. The Spanish singer has won a Grammy Award as well.

While moving toward her love life, Rosalia was once romantically linked to C. Tangana. She also worked with her ex-boyfriend on a few projects.

But since her break-up with Tangana, who is Rosalia boyfriend? Take a close look at her love story in depth!

Who is Rosalia Boyfriend? Is She Dating Anyone?

The answer to the question is that the artist seems to have a boyfriend at present. Rosalia is dating Rauw Alejandro. Initially, the couple kept their relationship behind closed doors. The couple then made their relationship official in December of 2021 after Rosalia shared an intimate picture of the pair.

In the beginning, according to 20 Minutos, they posted a few single pictures of each other at the same time from the same location on their social media handle. It really confused many of their fans if they are really an item or not.

Furthermore, Ocio Latino magazine confirmed that Tobella and Alejandro have been in a romantic relationship for several months now. But, at the time, they just wanted to keep their romance out of the public glare. As per the lovers’ colleagues, their relationship is going so strong.

On the other hand, an insider confirmed to the above-mentioned magazine that the couple was kissing all the time while Alejandro was shooting his music video, but avoided being photographed at all costs.

Alejandro is a Puerto Rican singer. The artist from San Juan signed a music deal with Duras Entertainment in Jan 2017. Besides, tabloids claim that since Rosalia and Rauw share many similarities, they have also been planning to collaborate.

The beautiful singer previously dated C.Tangana. The former couple met in a music room and began dating in 2016. Tangana also approached her to work together. The artist told EL PAIS in 2016,

“I heard her sing and, from the first moment, I knew that I wanted to do music with her … I had a little bit of game and I convinced her.”

Subsequently, they got involved in a few music projects together. Rosalia’s boyfriend also assisted her in co-writing eight songs out of the eleven of her debut album, El Mal Querer. This the same album that earned her worldwide popularity.

Furthermore, they together recorded two singles Call me later and Before dying too.

Despite the same love they have shared for the music, their romance couldn’t last long. They broke up after dating for around two years in 2018.

After their split, Tangana began dating actress Breta Vazquez while Rosalio has since kept her personal details to herself.

Despite the break-up, Rosalio shares a great bond with her ex-boyfriend

The former flames maintain a healthy relationship even after their break-up. The two often reference each other in their songs and interviews. Her ex-beau revealed they also meet each other on various occasions. He told in a 2020 YouTube interview,

We have very good relationship. Personally, we get along fucking , we’re friends. Right now she is in Miami, so long since I’ve seen … but we took debuti.

The rapper also considers his girlfriend “the most beastly artists that this country has given.”

In the music videos of his song ”Demasiadas Mujeres” the model featured in the video had a striking resemblance with his ex-bae Rosalia. The song went like this,

“I can’t forget the one who told me that she would always be there for me. Of which he said that only one night and then ‘there was no more’. The one that left with my desire ‘to love, my desire’ to live. I have not ‘found it again.”

Later on, many online sources reported the artist is talking about his ex-GF Rosalia.

Has Rosalia Ever Dated Bad Bunny?

In April 2019, Bunny uploaded an Instagram photo with the singer. In the picture, the duo looked way too comfortable with each other. The pic was taken backstage at Coachella. He captioned the image,

Take a look at the photo,

The same night, Rosalia also uploaded a photo of themselves with the caption,

“q haces mañana??” that translates into “What are you doing tomorrow?”

Subsequently, fans started speculating there is something interesting between the two. But, Rosalia denied the tittle-tattle and said they are just good friends during her interview at the 2019 Billboard Latin Music Awards. She told,

Fans once again started shipping when they both appeared to have dinner together in June 2019. The same month, they re-confirmed they are just pals.