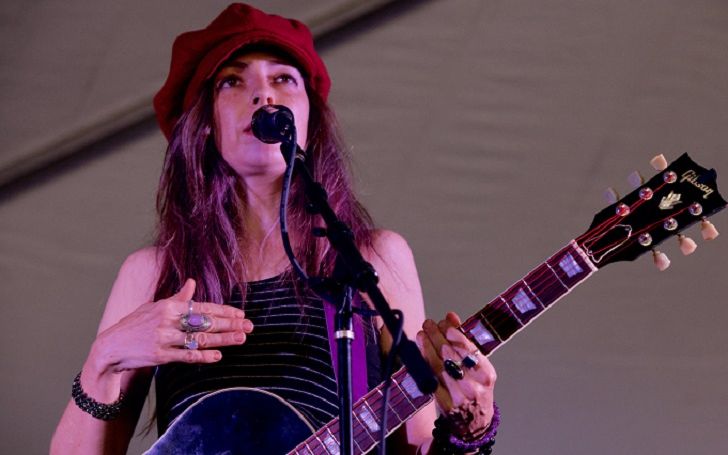 Amy Lee Nelson is the daughter of one of the most recognized figures of outlaw country, Willie Nelson. In addition to music, the 89-year-old musician is also a noted writer and an actor, who has worked in over 30 movies.

Similarly, Willie’s daughter Amy has also shared the same love for music. She is now on the stage left at Folk Uke, the Texas musical group. Nelson is also an active member of Willie’s Kids, a non-profit organization.

In addition, Amy has a biological sister Paula Nelson, a country music singer, and has also six half-siblings from her father’s past relationships.

In this article, let us try to explore everything about Amy including her love life and other hidden facts!

How old is Amy Lee Nelson? Her Early Life

Amy is 49 years old as of 2022. She was born on 6th July 1973, in Texas to Willie and his third wife Connie Nelson. Growing up in her hometown of Texas, the star kid has American nationality and belongs to the Caucasian ethnicity.

Her Parents Married Life: Sister Paula Was Born Out of Wedlock

Amy Lee Nelson’s father Willie has briefly talked about his love life in his memoir, Me and Sister Bobbie: True Tales of the Family Band, released in September 2020. He also opened up in the publication about how his marriage with his second wife Shirley Collie dissolved when Collie saw a bill from a Houston hospital that included the birth charges of a baby girl. He recalled the story,

“Shirley wasn’t buying that for one simple reason: The bill said the charges were for the birth of a baby girl, Paula Carlene, born to a Mrs. Connie Nelson. “Shirley wanted to know who in the hell was Connie Nelson. Couldn’t lie. Was caught flatfooted. Had to get the words out of my mouth. ‘Connie’s my girlfriend and Paula’s our daughter.”

Willie later divorced Shirley in order to marry his third wife Koepke in 1971. The former flames led a happy married life for several years. However, their relationship couldn’t last long and they divorced in 1988.

Since then, Connie has kept most part of her love life out of the media, her ex-husband Wellie is in a blissful married life with his fourth spouse Annie D’Angelo.

Amy Nelson Has Five-Other Half-Siblings: One Killed Himself

Furthermore, Amy has two more half-brothers Lukas Autry and Jacob Micah from her father’s fourth marriage with D’Angelo. Lukas is the lead vocalist and guitarist for the country-rock group Lukas Nelson & Promise of the Real.

Who is Amy Lee Nelson? Her Professional Career

As we have already mentioned that Amy is also a promising figure in the music world. She currently performs at the musical group Folk Uke. She formed the band along with Cathy Guthrie.

They released their first self-titled album in 2005. The debut album includes a number of songs like ‘Knock Me Up,’ ‘Tonight You Belong To Me,’ and ‘In Case We Die.’

The group came with their second album named ‘Reincarnation’ in 2011. Their third album ‘Starfukcer’ which was released in 2016 features a couple of songs that include ‘Sweet Talker,’ and ‘BJ to a DJ.’

Furthermore, Amy frequently performs at a couple of bars around Texas including Sam’s Town Point, in Austin.

Besides, Nelson currently works at Lovey: King of the Roadies, a feature doc that documents the life of Ben Dorcy.

Nelson has kept every detail of her love life to herself. She has not revealed anything about her dating life on her social media handles. So, it becomes hard to find out whether Amy is ever in a marital relationship or not.