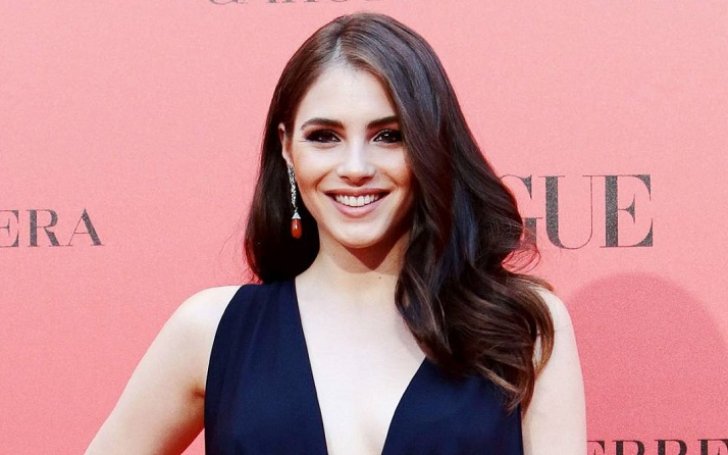 Andrea Duro is one of the prominent faces in the Spanish film and TV industry.  The actress gained international fame with her iconic role in the Antena 3 series Física o Química.

Duro’s love life has also been the subject of curiosity over the years. Her fans are wondering to know who the Spaniard is dating after her breakup with footballer boyfriend Chicharito.

So, let’s find out everything about Andrea Duro, including her relationships and current boyfriend.

Who are Andrea Duro’s Parents?

A post shared by Mónica Flores Coronado (@monicaflorescoronado) on Jul 2, 2019 at 1:18am PDT

Her mother and father are married for more than three decades. The two started dating in 1980 and got married after eight years of relationship in 1988.

Andrea Duro has a Sister

Duro grew up in Fuenlabrada, the municipality of Spain along with her younger sister who is known as @claudiaduroflores (Clau) on Instagram.

The Spanish actress often shares childhood pictures with her sister on her Instagram.

Andrea Duro Flores was born on 14th October 1991, in Madrid, Spain. She holds Spanish nationality and belongs to the Spanish ethnicity.

Andrea kick-started her acting career with a role in a TV series Cuestión de Sexo in 2007. Later, she gained popularity after her breakout role of Yoli in Física o química (Physics or Chemistry) in which she worked from 2008 to 2011.

Similarly, her role as Marie Leduc in the TV series Velvet Coleccion (2017-19) brought her further acclaim. In 2020, Duro portrayed Aldana in The Curse of the Handsome Man.

Besides, Andrea also has acted in many silver-screen projects like Three Steps Above Heaven (2010), Ghost Graduation (2012), and more.

Along with her acting career, Andrea is enjoying a happy relationship with her boyfriend, Juan Betancourt. They have been dating for over a year now.

Recently, the actress uploaded a photo with her beau Betancourt in honor of their one-year togetherness on 22nd March 2020. “It happened on March 22… One year ago 🧡,” she captioned her post.

Duro posted the first photo with her boyfriend on 23rd March 2019. It seems the two started dating around that time.

The couple posts a number of romantic photos on their respective social media accounts regularly. It is safe to say, their romance is sailing smoothly.

Talking about her boyfriend Juan, he is a Cuban-Spanish actor and a fitness model.

Andrea became a matter of talk after she started dating Mexican professional footballer Javier Hernandez (also known by his nickname Chicharito). Their love story began with the exchange of some flirty messages on social media back in July 2017.

On 27th July, Duro shared a photo of the Eiffel Tower, on which Javier commented “Hi! I want to meet you, will you let me?”

Duro replied “Oh yeah? I thought you already knew me.”

They gradually began sharing each other’s photos on their social media although the two kept it very private initially.

Duro lived in London with her boyfriend Chicharito during the 2017/18 season. He was playing with West Ham United at that time. Meanwhile, Chicharito also played for Real Madrid previously in the 2014/15 season. As of 2020, he plays for LA Galaxy in the American soccer league MLS.

After around a year of dating, Andrea and Javier started facing hurdles in their relationship. The couple’s irreconcilable differences ended their romance in mid-2018.

Duro previously linked to an actor Joel Bosqued. The two started dating back in 2011 and split after three years of an affair in 2014. Nevertheless, while they were together, the two attended several public functions together.

On 26th June 2013, Andrea and her then-boyfriend Joel attended Cosmpolitan Fragrance Awards held in Madrid, Spain. In addition, they also appeared in the “La Vida Inesperada” premiere at the Cervantes Theater on 28th March 2014.

What is Andrea Duro Net Worth?

Andrea Duro has an estimated net worth of $2 million as per Celebrity Net Worth in 2021. The actress has racked a significant portion of her wealth through her acting career solely.

White Lines Actress Marta Milans: Know Everything About Her