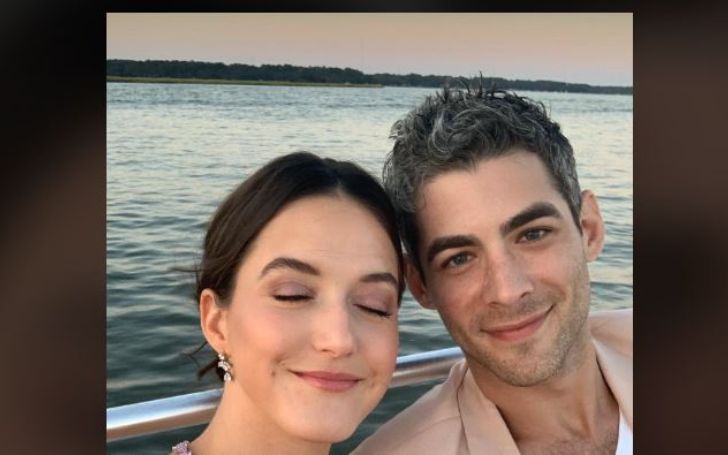 Andrew Aronow is the founder and president, and executive producer of Pocket Ace Productions, LLC, a digital content producing company. He is better known as the husband of model and actress Alaia Baldwin, Haley Baldwin’s sister.

Additionally, Aronow is also the founder of Absolute Zero Entertainment, a full-service entertainment company that he launched in the year, 2013. Absolute Zero encompasses the creative development, production, financing, marketing, and distribution of cross-platform content and omnichannel experiences.

Well, read extensively about him in the narratives below; his hometown, education, career, the relationship timeline of his and his wife, Alaia Baldwin, and further.

Andrew Aronow Is From Michigan: His Family and Education

While Aronow is yet to come clean about the scoop of his parents including his ethnicity, what has been out in the open is that he is an older brother to his sister, Alissandra Aronow.

He is a former student of Cranbrook Schools and Wayne State University. Andrew graduated Bachelor of Arts in Political Science and Government.

How Did Andrew Aronow Start His Career In Filmmaking? His Profession

After graduating from Wayne State University in Detroit, Aronow began his professional career as a Legislative Correspondent for U.S. Congressman John Dingell.

While working in Washington, DC, the Michigan native authored and published several op-eds as well as collaborated on numerous speeches for the Congressman.

He learned about filmmaking by working on commercials and some indie films in New York. After DC, Aronow moved to New York where he developed and produced branded entertainment for @radical.media.

Then in 2013, he founded Absolute Zero Entertainment through which Aronow started production on Fandom and managed to finish the film in less than a year. For the production, he put together a crew pretty quickly and he and his team went out and shot it for 31/2 weeks going around the country. He then cut a small sizzle reel to raise funds to shoot more.

The WSU graduate was also able to connect with NFL players and industry insiders through the Fantasy Sports Trade Association. The documentary has Hollywood icon, Christian Slater, as its narrator.

The film also features many of the industry’s top executives and experts. In this well-crafted documentary, Alaia’s husband successfully captures the hype and frenzy of fantasy football. Aronow created “Fandom the Film” to rather present the popularity of fantasy football in today’s sporting culture.

As such the documentary explores the people who take part in the weekly drama of picking lineups and competing in leagues across the country.

Aronow Is Into Fantasy Sports

Aronow believes fantasy football to be so big in America, yet he previously said nobody ever made a documentary that really explored it. It hence was one of the reasons he wanted to capture the fan experience and explore how it evolved from niche culture to mainstream.

However, by the time he finished the film just two years later, the number of players had jumped to 75 million and many of the fans are now women. Aronow also says the old stereotype that football is “just for men” is long gone.

How Did Andrew And Alaia Meet Each Other?

The pair first met through National Lampoon’s Vacation actress and model, Christie Brinkley and her family. They started their relationship in Jan 2014. Brinkley was the one who brought Alaia, the daughter of Kennya Baldwin to Parrot Cay where she would meet Aronow.

It was apparently Billy Joel’s daughter and singer/songwriter, Alexa Ray Joel’s birthday party. Christie was also the one who sent Alaia pictures of her future husband playing soccer.

Aronow and Alaia dated for three years before tying the knot. The former apparently proposed to Alaia to be his girlfriend in May 2014 and then asked her to marry him on 29th April 2016.

The couple married on 2nd September 2017 in a lavish ceremony at Blue Hill At Stone Barns and the famed Hudson Valley restaurant. Their wedding was a big Baldwin bash in upstate New York, Westchester County that happened over Labor Day weekend. The wedding was 100% GLUTEN FREE WEDDING.

Christian Oth Studio handled the photography and videography. The bride’s younger sister, Hailey Baldwin, and her cousin Ireland Baldwin were the bridesmaids in the countryside nuptials.

Hailey was the maid of honor at the outdoor wedding ceremony. Christie Brinkley too was among the attendees.

Following the ceremony, Aronow’s bride took to Instagram to reflect back on her love story with her fiance turned husband. Of her marriage to Andrew, Alaia wrote,

“On January 2, 2014, on the moonlit beach of Parrot Cay, our journey began with our first kiss.”

Baldwin reposted photos from her nuptials in September 2019, calling her producer husband “forever.” Alaia and Aronow’s wedding happened a year earlier than Hailey and Bieber’s nuptials in Sep 2018.

Andrew and his wife, Alaia, and their daughter now split their time between residences in New York and Los Angeles. Aronow’s spouse, Baldwin in addition to being a mother also navigates her modeling career, social activism, and charitable work with the demands of her marriage to movie producer Aronow.

What Is Alaia Balwin’s Husband, Andrew Aronow Net Worth?

The figures coefficient that might have expressed Alaia’s husband’s fortune are a bit hard to come by. In fact, the next generations of Stephen Baldwin are albeit less popular names including their son-in-law except for Mrs. Bieber, Haley Baldwin. The dim popularity in turn hasn’t let much about Alaia and her spouse’s world much less their net worths and all.

Whatever the case though it seems less likely that Baldwin and her baby father are anywhere near as rich as other famous Baldwins such as Alec, Stephen, William (Jameson’s father), Daniel, and others. Having said that the safest bet nonetheless would be to say that Aronow has a net worth anywhere in the pool of hundreds of thousands of dollars.