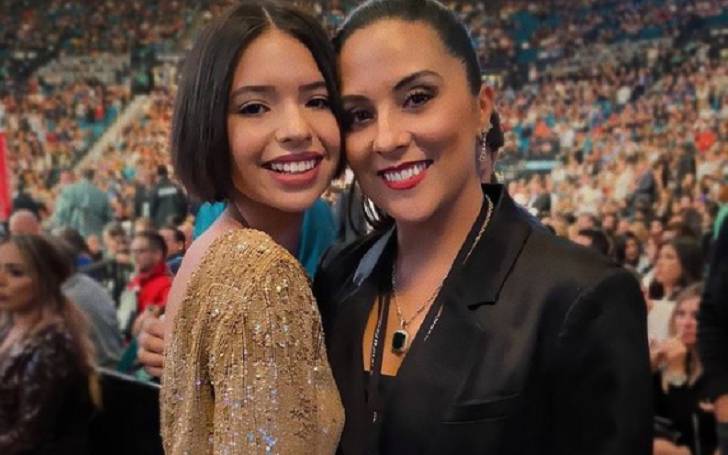 Aneliz Aguilar Alvarez is a celebrity spouse, who is better known as the wife of Pepe Aguilar. Her husband is a Grammy-Award-winning musician who has sold over twelve million albums worldwide.

Taking about their long-lasting marriage, the two are together for over two decades and are still leading a blissful marital relationship. Besides, Aneliz is the mother of three grown children. Like their father, all of their kids have built a highly successful path in their own way.

In this article, we will try to find out more about Pepe Guilar’s wife Aneliz Aguilar Alvarez!

Who is Aneliz Aguilar Alvarez?

Aneliz is a celebrity spouse who hit the media following her marriage to Mexican-American singer and songwriter Pepe. She has, however, kept most part of her professional life out of the media.

Unlike his wife, Aguilar is one of the leading faces in the music world with an extensive career that has spanned over four decades. The legendary artist has released a number of mega-hit albums, winning multiple prestigious accolades, including four Grammy Awards and five Latin Grammy Awards as well.

Where is Aneliz Aguilar Alvarez From? Details on Her Parents and Nationality

Aneliz was born and raised in the United States of America. She is an American as per her nationality. While most of the information surrounding her early life is still missing, she once uploaded a photo of her mother and sister on Insta with the caption,

“The birthday celebrations begin !! My adored mother, sister and daughters.”

On the other hand, Aguilar is the son of late great Mexican singer and actor Flor Silvestre and Antonio Aguilar. Having deep roots in the entertainment industry, Pepe started playing at the concert at the early age of three.

How Did Pepe Aguilar and His wife Aneliz Meet?

Several sources suggest that the duo first came across when Aneliz featured in a music video of his brother, Antonio Aguilar Jr. He was literally shocked by her immense beauty. The two dated for a few years before they took their relationship to the next level.

Pepe and Aneliz tied the knot back in the late 1990s, in a low-key wedding ceremony. Their family members and close friends were the only attendees at the event. It’s been over two decades that the duo are married and their relationship is still going pretty strong, thanks to their support and love.

How many children does Aneliz Álvarez Have?

Aneliz is the mother of three kids. Pepe Aguilar’s wife gave birth to their first child, a daughter, Aneliz Aguilar on 7th April 1998. Two years later, on 15th August 2000, the duo welcomed their son, Leonardo Aguilar. Furthermore, they became a parent for the third time when their daughter, Ángela Aguilar was born October 8, 2003.

Alvarez and Aguilar have a great relationship with all of their kids. Besides, all the Aguilar family members are active on their respective social media handles and often share photos of themselves on various occasions.

Pepe Aguilar Wife Was Once Kidnapped

Back in September 2013, the award-winning artist told Mario Lopez that his wife and brother were once kidnapped in Mexico. He said,

“It was the type of kidnapping that they’re calling them “express kidnappings.” What they do is they kidnap you and they put you in the trunk of your car just drive you around take your car, take your money, go to the ATM get all the money they have, and then after 4-5 hours drop you in the middle of nowhere.”

Has a Step-Son From Her Husband’s First Marriage

Aneliz is also a mother to one step-son, Jose Emiliano Aguilar, from her husband Pepe’s first marriage. Back in 2017, Jose attracted huge notoriety after trying to smuggle four Chinese immigrants in his trunk into San Diego. Following the incident, the son of a Mexican-American mariachi artist was sentenced to eighteen days in jail and was later released on bond.

Net Worth of Aneliz Aguilar Alvarez

Her net worth stands at $200,000 as of 2023. In the meantime, the net worth of her hubby Pepe is $10 million. He has earned a major portion of his wealth from his music career. He currently owns a house in Los Angels.

Yes, the celebrity spouse is active on Instagram and has also amassed decent fan followings of 133k. She mostly shares her family photos on her social media platforms.