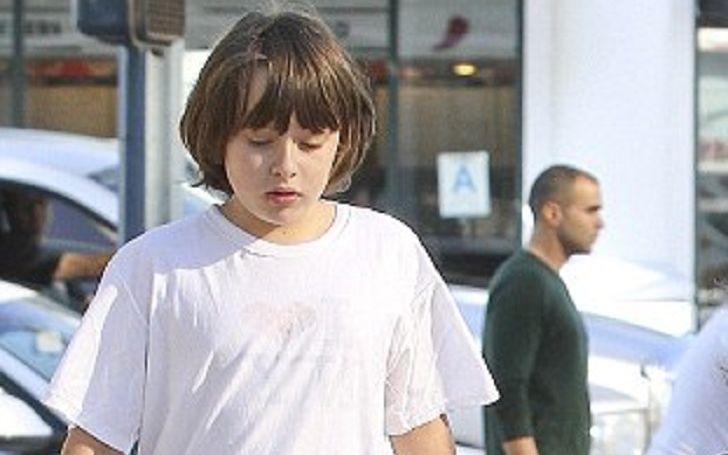 Anton James Pacino is the twin son of the legendary actor Al Pacino and his former partner actress Beverly D’Angelo. Both of his parents have built great careers in show business. Talking about their past affair, they were in a relationship for about six years from 1997 to 2003.

Besides, Anton also has a twin sister named Olivia Pacino. Despite being the son of celebrity parents, Pacino has kept him out of the spotlight for the most part.

But, in the article, we will try to find out some unknown facts about him including his parents’ custody battle, age, and many more latest details!

His mom D’Angelo got pregnant at the age of 48 and welcomed her twins a year after through in vitro fertilization. Anton and his twin sister Olivia were born on January 25, 2001, at Cedars-Sinai Medical Center, located in Los Angele, California.

Who is Al Pacino’s son Anton?

Anton is a celebrity kid who rose to stardom just after his birth as the twin son of an ex-iconic Hollywood couple Al Pacino and Beverly D’Angelo. Talking about their love story, the former duo started their lovey-dovey back in 1997 and were in a relationship for around six years. They split in 2003.

In an exclusive interview with Closer Weekly, the Vegas Vacation costar Beverly told that her then-boyfriend Pacino wanted to have children after a few months into their relationship,

“I had a fantasy that when you have kids, you do it in a family setting. After we’d known each other for three months, [Al] looked me in the eyes and said, ‘I want you to be the mother of my children.’ That’s all I had to hear.”

What is Anton doing in 2022? Rare appearance with his father

Anton, 21, prefers to live a life out of the public eye. Despite having such a strong family background, the young boy has yet to show his interest in anything. If sources are to be believed, Anton James Pacino, as of 2022, is still at school.

Besides, Pacino has made a few public appearances that include some rare outings with his father too. He was seen with his dad, spending a fabulous time in Beverly Hills in late 2011. The two again appeared together for their Beverly Hills shopping trip in June 2013.

However, Anton had been off the spotlight for several years until his appearance with his family at the 92nd Annual Academy Awards in California in Feb 2020. He attended the big event along with his two sisters and father.

Born and raised into a family of acting, his twin sister Olivia is following her father’s career path. She took some acting training at the Lee Strasberg Theatre and Film Institute, in New York City.

Besides, the future actress completed her graduation from Lee Strasberg Theatre and Film Institute, in New York City in May 2019. As per sources, Olivia also works as a model and photographer.

He Also Has a Half-Sister

In addition, Pacino shares a strong bond with his half-sister named Julie Marie Pacino. She is from his father’s previous relationship with an acting teacher Jan Tarrant. Julie’s parents’ relationship was, however, short-lived as the couple started dating in 1988 and went their separate ways in 1989.

In addition, Julie is a producer by profession. Some of her on-screen credits include Billy Bates (2013) and Shifting Past (2017).

His father Al and mother Beverly dated for around six years before their relationship hit the rocks in early 2003. After their split, an award-winning actor Al filed suit in a family court in New York City. He sought joint custody of their children and liberal visitation from their mom in the file. Despite their early ups and downs in the custody battle, the court eventually granted them joint custody of their twins.

Additionally, Pacino paid $35,000 per month to support his children and $18,000 a month for the West Side apartment owned by D’Angelo at the time.

As for a fact, Anton’s mother Beverly was married to Italian duke Don Lorenzo Salviati in the past.

Al Pacino’s son Anton James Pacino has maintained a low profile when it comes to his dating life. Further, Anton has never come out with his relationship status so far. So, as of 2022, it is hard to say whether Anton is in a relationship with anyone or not.

Where Does James Pacino Live? His Parents’ Net Worth

Being the son of one of the Hollywood stars, Anton has had a great lifestyle. He lives with his mom in Los Angeles. Nonetheless, moving towards his net worth, the exact figure is yet to be estimated.

But, his father Al Pacino has a guesstimated net worth of $120 million and his mom Beverly’s wealth stands at $20 million in 2021. The former celebrity couple has made a significant portion of their wealth from their acting career.

Furthermore, he made $1.5 million for his role in Glengarry Glen Ross as well as $6 million for Carlito’s Way in 1993.

All You Need to Know About Anton’s Father Al Pacino

His father Al Pacino is a well-known actor in Hollywood. He made his acting debut with a minor role in the 1969 movie Me, Natalie. Over the years, Pacino, 81 has played numerous charismatic roles in movies, most popularly in The Godfather franchise, Serpico, Glengarry Glen Ross, and more. Along with his successful acting career, the actor has also won several prestigious accolades including two Academy Awards and more.

His Mother Beverly D’Angelo is also an Actress

Like his father, Anton’s mother Beverly is also an actress with numerous acting credits under her belt. Most notably, D’Angelo worked in the National Lampoon’s Vacation films. She also got an Emmy Award nomination for her work in the movie A Streetcar Named Desire.

Other Quick Facts about Anton