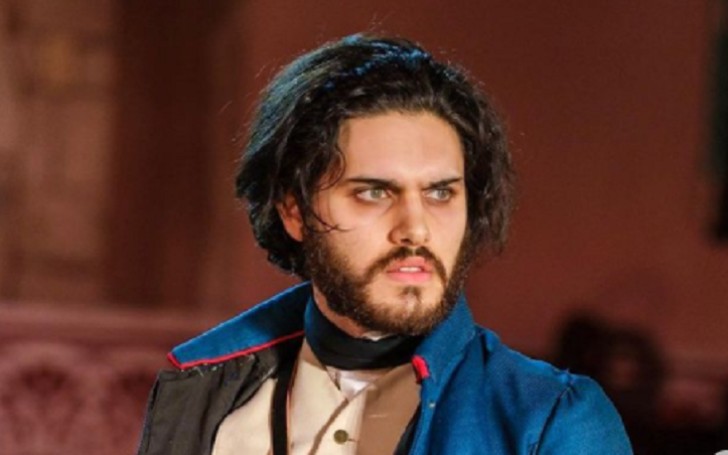 Aria Shahghasemi is one of the most potential budding stars in the entertainment world. Professionally dabbled into the world of acting in 2015, Shahghsemi has since been part of a few other notable TV shows. He snagged the role of Landon Kirby on the fantasy drama television series Legacies which ultimately took him to the mainstream.

Besides his acting career, many of his fans are curious to know about his love life. So, let us find out if the handsome hunk does have a girlfriend.

Aria Shahghasemi Parents Are Iranian Immigrants: Details on His Ethnicity

Shahghasemi is the son of Hojat Shahghasemi and Fereshteh Khosravi. His parents who are originally from Maisri, Fars, Iran later emigrated to the United States and settled down in Minneapolis, Minnesota. Talking about Aria’s parents’ marriage, they have been married since 1991.

As far as his ethnicity is concerned, Shahghasemi has a mixed ethnical background and has an American nationality.

What is His Age? Grew Up With His Younger Brother

Aria is aged 24 at present and will celebrate his 25th birthday on 7th October 2021. He was born on October 7, 1996, in Minneapolis, Minnesota. He spent a significant part of his early life in his hometown of Minneapolis with his younger brother who reportedly plays football.

Shahghasemi, following his high school, went to Southern Oregon University, New York, graduating with a Bachelor of Fine Arts degree in theater. He then enrolled at the New York Neighborhood Playhouse School of the Theatre to obtain an acting apprenticeship.

Shahghasemi had always a knack for bartending who landed his first job as a bartender. He landed the job after one of his friends asked him if he wanted to help out in Rue B, a jazz club with a Parisian feel, offering specialty cocktails, snacks & live jazz located in New York.

He gained more bartending experience after he started working at Pier A Harbor House, one of the best dining al fresco restaurants in NYC with Manhattan’s mesmerizing sunsets and water views.

In addition, before Aria became a full-time actor, Shahghasemi would work as a carpenter at Anagram studios. He was predominantly responsible for woodwork, demolishing props, and set painting.

Aria is also an accomplished mixologist, specializing in cocktails and margaritas.

Aria performed in theatrical shows before making his way to Hollywood. Sources say the young actor played the character of Laertes, Ophelia’s sister portrayed by actress Eden Brolin in the play ‘Hamlet.’

Shahghasemi bagged the first acting role of Davis Bennett in the 2015 series, Unforgettable starring Poppy Montgomery, Dylan Walsh, and Michael Gaston. A year later, the promising actor went on to portray the role of Omar in the drama series, Law & Order. He gained initial popularity following his breakout performance in the 2018 TV series, Instinct. The same year, Aria landed his first silver screen role in the movie No Alternative.

Who is Aria Shahghasemi Girlfriend?

Aria remains hush-hush when it comes to his love life and has yet to come forward with his love affair. Because of his low-key profile, we have yet to find out whether Shahghasemi is dating a girlfriend or still remains single. Apparently, many online tabloids suggest that the actor’s relationship status is single as of 2021.

Aria Was Once Rumored To Be Dating Danielle Rose Russell

In the past, Shahghasemi was rumored to be in a relationship with his The Originals co-star Danielle Rose. The two first came across on the set of The Originals. They appeared as best friends on the show. But when the two popped up in its spin-off Legacies, they played each other’s love interest.

Since they spent a lot of time together on and off the set, fans began speculating Danielle and Aria were an item off the screen as well.

But, they have neither confirmed nor denied the rumors.

His Net Worth and Salary

Aria has made quite a fortune from his flourishing acting career. As of 2021, his net worth is $1 million. As a budding actor, Shahghasemi’s income will surely boast in the years to come. Furthermore, Shahghasemi is also paid a considerable salary per episode for his appearance in TV shows.