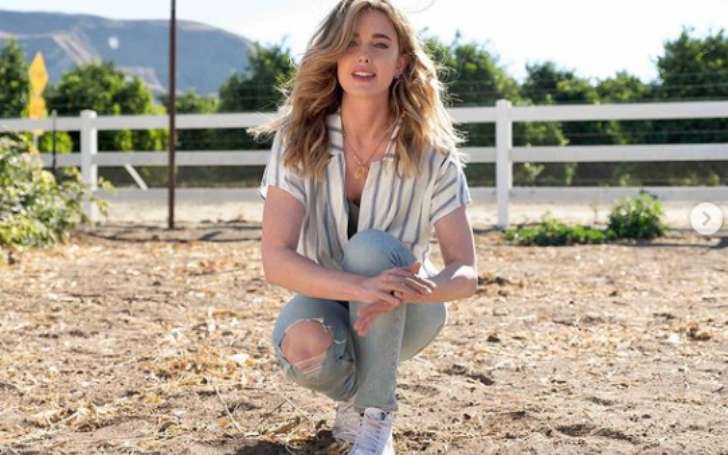 Ashley Newbrough is an American-Canadian actress and a producer who has made appearances in multiple movies and TV series. She shot to fame after her breakthrough role as Sage Baker in the CW drama series Privileged (2008). She also worked as a producer on the project.

As we say the best things come unexpectedly, Ashley found her best friend co-star Lucy Hale while starring in the series. She played her twin sister and looks similar to her. On the other hand, the actress is fully enjoying her love life with her boyfriend Matt Shively. However, the couple hasn’t talked anything further about their relationship. So, many of their fans wonder to know if Ashley is also married to her boyfriend and how long have they been together?

Well, in this piece below, we will find out everything about Ashley Newbrough’s personal and professional life.

Who is Ashley Newbrough? Her Parents and Early Life

Newbrough is an American-Canadian actress born on October 13, 1987, which makes her 35 years old as of 2022. She was born Ashley Elizabeth Ann Newbrough in Newport, Rhode Island, USA.

She was born under the star sign Libra and belongs to the Caucasian ethnicity. Furthermore, she has American-Canadian nationality as her mom is Canadian and her father is American.

Though she was born in Newport, Rhode Island, she later moved to Canada with her family at the age of three. Therefore, she spent most of her childhood growing up in Cambridge, Ontari0.

Talking about her qualifications, Ashley went to St. Benedict C.S.S school for her high school in Cambridge Ontario. Regardless, she hasn’t opened up about any further details related to her education. She must have completed her graduation now.

Ashley Newbrough was born to her parents; American father Greg Newbrough and her Canadian mother. Her father was a US marine corps officer by profession whereas her mother’s occupation is still not revealed.

Looking at her mom’s social media bio where she has written “Momma to 4 chickadees,” she is not the only child of her parents. She has three siblings in total; one brother and two sisters. Her brother’s name is Zachary Newbrough while her sisters are Alexandra and Carmen.

All the brothers and sisters are immensely close to each other. Also, they are found sharing each other’s pictures on their social media handles.

Ashley Newbrough is Dating Her Boyfriend Matt: Are They Planning to Get Married?

Newbrough is in a love relationship with her long-time boyfriend Matt Shively. He is also an American actor who is famous for his role as Ryan Laserbeam in True Jackson, VP.

According to the Instagram posts of the actress, the couple has been together for five years now. She posted a picture with her beau on August 26, 2020, wishing her partner the 3rd anniversary of their togetherness. She wrote,

“Verified 3 years with this guy 🤍! Thank you for finding and bringing home our sweet fur baby bat pig. You are my hero and he is the perfect celebration of our 3 years in love.”

Even before that, Ashley had already been public about her affair with Shively and keeps posting on her feed. Despite their long-time commitment, neither Ashley nor her partner Matt has talked about their first meeting nor if they are going to be a husband-wife soon.

Ashley and Matt’s First Media Appearance As a Couple

Back in 2019, the pair made a red-carpet debut as a couple at the premiere of The Wedding Year. The movie star then too used her social media to express her happiness.

Talking about the past relationship, there was no record of Ashley having a love affair with anyone in the past. Meanwhile, her partner Shively was in a romantic relationship with Laura Ashley Samuels in 2012. He also allegedly briefly dated Jordan Monaghan and Samantha Boscarino in the past.

The stunning American-Canadian actress stepped into the entertainment industry at the early age of thirteen. She started her career as a child actress and has been doing great in her profession ever since.

Ashley debuted in 2000 in the TV series, “The Zack Files.” Following that, the actress appeared in “Get a Clue,” “1-800-Missing,” “The Coven,” “Mistresses,” and many more. On the other hand, the actress has now also started working as a producer. She worked as an executive producer in Blue Moon Ball and Flowers and Honey.

Newbrough is now fully established in her profession and is all set to work on new projects in the coming days. She will hopefully be seen working as both actress and a producer.

Ashley’s Got Best Friend Lucy Hale From Her Career

Lucy Hale is an actress who worked alongside Ashley in the drama series Privileged. They were roommates while working in the show and later became best friends. She played a Twin sister in the series.

“I couldn’t have asked for a better town sister coaster, because Lucy is awesome. We actually are roommates now. We get along very well, we go shopping all the time, we do a lot together, so it’s very easy to play twins on camera.”

The co-stars turned friends are still going strong and are found visiting different places together. Ashley Newbrough even calls her a soul sister and often shares pictures with her on her social media.

What Is The Net Worth of Ashley Newbrough in 2022?

The promising actress has been working in the industry for almost two decades now. Looking at her flourishing career, Ashley must be a millionaire.

As of 2022, Ashley Newbrough has a net worth of $4 million. She has made her assets with her acting and brand endorsements as well. She is living a lavish life with her boyfriend in Los Angeles, California at present.

Being a successful actress with multiple movies and series credits, Ashley has a huge fan following on social media platforms. She owns an Instagram account under the name “#ashleynewbrough” with 63.3K followers.

The Privileged actress has an attractive height and stands 5 feet 9 inches tall. She has a set of unique green color eyes and dark brown hair to compliment her looks.