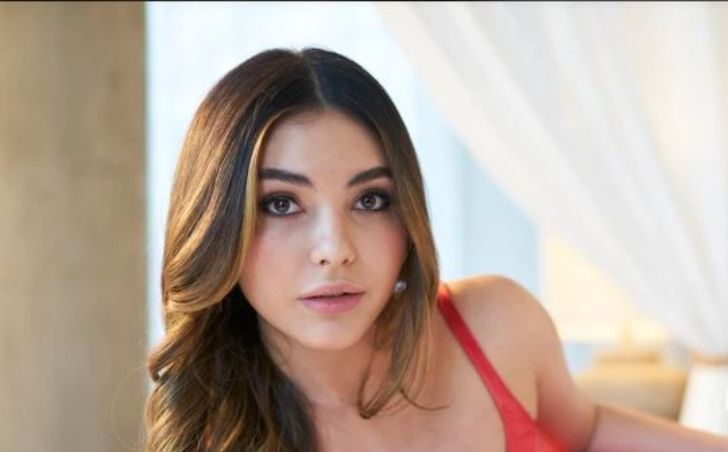 Atiana De La Hoya is a model, artist, a former child reality star, and a wanna-be actress. She has appeared on MasterChef USA (2010), Meet the Barkers (2005), and Access Daily (2010). De La Hoya is additionally known for being the daughter of the former professional boxer, Oscar De La Hoya and his former partner, Shanna Moakler.

Her father, one of the boxing legends, Oscar De La Hoya often created headlines be it through some controversies or his in-ring achievements. In recent times, though, his daughter is gaining the attention of a number of tabloids and is subsequently gaining momentum amongst the mainstream audience.

Atiana is turning out to be a rising star in the entertainment world. So know what are the factors that make the media turn their spotlight on her. Know beyond her vivacious personality, whether she has a boyfriend, behind-the-scenes facts from her thought-provoking artworks, and so on.

Atiana’s mother, Moakler is a former Playboy Playmate, and a former Miss USA. Her mother is also a popular model and television superstar.

De La Hoya’s parents, Moakler and Oscar De La Hoya got engaged in 1998, but they called it quits in 2000. After their parents’ divorce, Atiana lived with her mother.

The Californian upcoming model once revealed she had a “very normal” childhood, despite her parents’ ugly split.

After breaking up with her father, Atiana’s mother, Shana went on to marry Blink-182 drummer, Travis Barker in 2004. With that, Baron von Tito became the stepfather of Atiana De La Hoya.

Her mother and Travis welcomed two children of their own. Travis reportedly played an active part in raising the then 5-year-old Atiana.

Her mother, Shana, and Travis, however, ended their marriage in 2008 but Travis maintained a close relationship with Atiana. Even in the present, Atiana is fond of Travis Barker’s relationship with his current partner, Kourtney Kardashian.

She also went to Baker and Kardashian’s trip to Disneyland, Aspen in Dec 2021 with her half-siblings. Turns out she additionally is a big fan of her ex-stepfather’s girlfriend, Kourtney Kardashian.

Atiana and Kardashian also follow each other on social media and frequently like each other’s posts. Meanwhile, Travis (also the ex-husband of Melissa Kennedy) and Atiana’s father, Oscar have also maintained a mutual relationship with each other.

She Has Seven Half-Siblings

Atiana has one older half-brother, Jacob De La Hoya. He was born through her father, Oscar’s relationship with his former partner Toni Alvarado.

The brunette’s other half-brother, Devon De La Hoya is the son of Oscar from his previous marriage with Angelicque McQueen.

Atiana other step-siblings include Landon and Alabama Luella Barker, both born through her mother’s relationship with her ex-husband, Travis Barker.

Her father also has other children with another of his partner. The 11 world titles holder is father to Oscar Gabriel, Lauren Nenitte, and Victoria Lauren with his last ex-spouse, Millie Corretjer.

While Atiana is yet to reveal what college she is attending, she graduated from Sierra Canyon School, a high school in the Los Angeles neighborhood of Chatsworth in June 2017. She also went to Viewpoint School.

The 29th best boxer of all time’s daughter has been in front of the camera since a young age. When she was 7, De La Hoya appeared on Travis Barker and Shana Moakler’s show Meet the Barkers between 2005 and 2006.

While she started modeling at 14, Atiana would later move away from the field to focus on her high school.

She would nonetheless return to modeling and now works at the LA Models and MGM Models. In June 2021, she celebrated the release of her first-ever magazine cover shoot. That month, De La Hoya was able to secure her first magazine cover story with Galore.

While Atiana hasn’t revealed much about her current projects, her Instagram shows she’s got brand deals with companies like Too Faced Cosmetics. And considering De La Hoya’s clear talent and incredible physique, more modeling work is definitely on the way.

She Is Also Into Art

The ambitious beauty, however, also has plans to excel in other disciplines. Oscar and Moakler’s daughter, Atiana has also established a career as an artist, hand-painting designer bags and launching her own custom creations.

She said Art by Ati came about completely unintentionally. Moakler’s daughter was working at a store in LA and would doodle these characters on the sticky notes.

Travis’ former step-daughter says she also has a passion for art & film and hopes to explore more of that in the near future.

For someone who is just starting out her career, Atiana may have a long way to go before she is being discussed in terms of monetary achievements.

As a young model and an influencer, the Golden State celebrity is likely above living off of her parents’ allowance, but it seems less plausible that she, herself is affluent to the degree of her mother and father who both are multimillionaires.

In fact, her father, the Golden Boy is richer even by celebrity standards. The black-eyed artist has a whopping net worth of over $200million and at one time generated approximately $700 million in pay-per-view income, making him the top pay-per-view earner. The record toppled during Floyd Mayweather Jr. and Manny Pacquiao in May 2015.

Does Atiana Have A Boyfriend?

As a model, Atiana De La Hoya is overt with most of her usual pursuits, she, however, is yet to discuss what the facet of love life looks like.

The influencer is certainly datable and could have had been through a few or two relationships. Though who she is dating at the moment is a complete mystery. That said, we hope, Atiana finds a perfect boyfriend for herself soon.