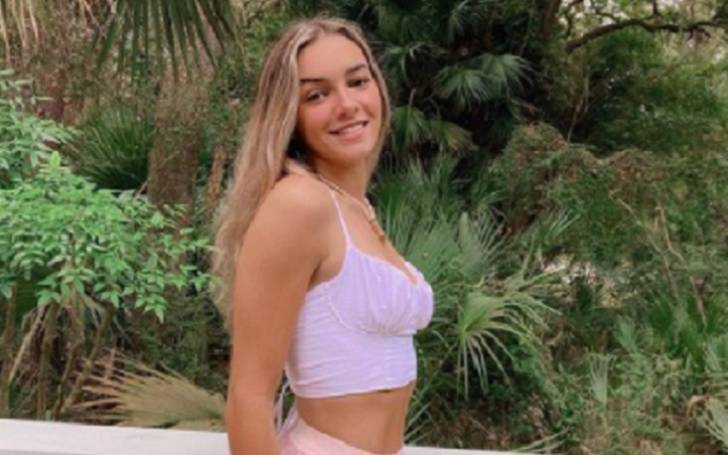 Avery Grace Sehorn is a famed star kid who has been into the limelight as the second-born daughter of the former power couples; Angie Harmon and Jason Sehorn. Her parents belong to different fraternities as her mother is an actress while her father is a former football cornerback.

In the meantime, Avery looks like she is following her father’s career paths. She has involved in a number of sports such as volleyball, basketball, and more at school.

Well, in this article, let’s find out more about Angie Harmon’s daughter Avery!

Where is Avery Grace Sehorn From? Her Age and Early Life

Avery is from Dallas, Texas, the United States. She was born in June 2005 and her age is 15. She spent the first few years of her early life in her hometown of Dallas before moving to Los Angeles with her family. They eventually settled down in North Carolina.

Besides, as far as her ethnicity is concerned, Avery is Caucasian and holds American nationality.

Sehorn studies at Charlotte Christon School, in Charlotte, North Carolina. There, the star kid is involved in numerous sports. She plays both volleyball and basketball at school. As a matter of fact, the rising star became the Athlete of the Week back in Jan 2020.

A couple of weeks later, Avery also ended up as the third finalist at the school’s annual event. Besides, Sehorn’s mom often shares her photos supporting and motivating her multiple sports prowess.

Back in 2016, Avery scored her first TV role, playing the young girl on the TNT series Rizzoli & Isles‘ episode Young Girl. She appeared in the project along with her mother who portrayed the lead role of detective Jane Rizzoli. Angie also won the People’s Choice Award and Gracie Allen Award for her performance on the TV.

Grew Up with Two Sisters

Sehorn has two sisters, an older Finley Faith Sehorn, born in mid-October 2003, in Dallas, and a younger, Emery Sehorn, born on December 18, 2008. Her big sista attended Charlotte Christian High School and used to play soccer there.

Her father Jason and mother Angie first introduced through her maternal grandmother following the game. The two subsequently hit it off and dated for a few months before they got engaged on The Tonight Show with Jay Leno in March 2000. Sehorn proposed to his girlfriend in a super surprising way in front of a live studio audience and millions of viewers on television.

Talking about their marriage, they exchanged their vows on 9th June 2001, in a private wedding ceremony. The exes led a happy matrimonial relationship for thirteen years before they went their separate ways unanticipatedly.

Take a look at Her Parents’ Divorce

Harmon and Sehorn split in November 2014. However, the two never commented how their long-time relationship dissolved. At the time, an insider said Us Magazine, that Jason initially spent several months away from his family,

“A large part of it is when you spend five or six months a year away from your spouse, it gets really tough.”

A source close to the couple further revealed that the duo gradually became used to with their situation,

“In the beginning, they really missed each other but then they got into a groove where one person took over the main responsibilities of parenting while the other was working.”

Soon after their separation, they both found their new soul mates as Harmon engaged to an actor Greg Vaughan while Sehorn is married to an activist Meghann Gundermann. The footballer has been in a beautiful marital relationship with Meghan since 2017. The duo also has a daughter, Sage Cru Sehorn, born in 2020. Sehorn was first married to former CNN correspondent Whitney Casey in the late ’90s.

The exact amount of Avery’s net worth is yet to be revealed. But, being the daughter of successful parents, Sehorn undoubtedly lives a luxurious lifestyle. Her mother has an estimated net worth of $30 million and receives a salary of around $185k per episode. She has made a large portion of her wealth from her work in movies and TV shows.

On the other hand, her father Jason’s fortune sits comfortably at $20 million.

Who is Avery Grace Sehorn Dating?

Sehorn is not dating anyone publicly, neither has she mentioned her love life ever. She is more focused on her study and sports rather than getting involved in any sort of relationship.