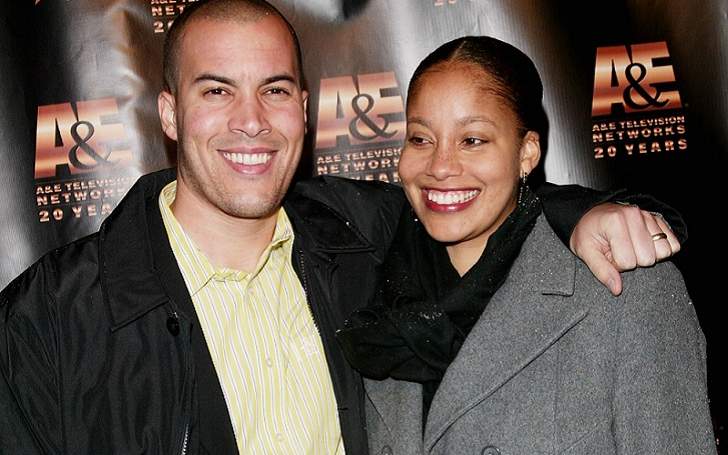 Aviss Bell (aka Aviss Pinkney-Bell) is a highly-educated woman who works as a clinical supervisor at The Autism Collaborative Group, a California ABA providing company. Aviss, a Long Beach State University graduate was previously the owner of Look What I Made, an arts-and-crafts play space for kids.

Despite the professional successes, Bell is better known as the wife of the actor Coby Bell. The iconic couple has been together for nearly two decades. Besides, the clinic supervisor is the doting mother of two sets of twins with her husband.

In the article, we will include many unexplored facts about Coby Bell’s wife. Take a closer look!

What is Aviss Bell Age? Details on Her Date of Birth and More

Her age is 51 as of March 2021. Aviss was born on 11th Jan 1970, in the United States. She is an American as per her nationality and belongs to the Afro-American ethnicity. However, other than that, there is no further information regarding her early life and family details.

Is a Well-Read: Studies at the University of North Texas

Aviss went to George Washington High School in 1984 and completed her high schooling in 1988. The same year, she went on to enroll at San Francisco State University, graduating in psychology in 1991. She soon joined Long Beach State University and earned a BA in psychology from the college in 1997.

Furthermore, Bell attended the California State University Long Beach to study Kinesiology and Exercise Science (Sport Psychology). The scholar with wide knowledge now studies at the University of North Texas and will complete her masters’ degree in Applied Behavior Analysis with an emphasis on sport in 2022, as per her Linkedin bio.

What is Coby Bell’s wife Aviss Bell up to These Days? Her Detailed Career

Aviss Pinkney-Bell is now the clinical supervisor at The Autism Collaborative Group. She started working with the company in March 2021. Headquarters in Garden Grove, The Autism utilize ABA to organize events for kids who have been diagnosed with autism and other related disabilities.

Prior to that, Bell has worked with several other companies. She spent the first nine years of her professional career working with Autism Partnership. There, Bell served as a behavior interventionist as well as a consultant from Oct 1993 to 2002.

Soon after her long-time association with Autism, Aviss went on to join ThereCare, a Hospital & Health Care in New York. She worked with the multi-service healthcare company as a Behavioral Consultant for around one year.

Besides, Coby Bell’s spouse spent three months working as the Spring Basketball League coordinator at the Alpert Jewish Community Center. She now serves as a treatment analyst at the Autism Partnership, in Seal Beach, California. Bell is a part of the company since August 2019.

How Long are Aviss Bell and Husband Coby Bell Married?

The couple has been married since 2001. Aviss and Coby exchanged their vows on 9th June, in a private wedding ceremony. Sources reported the duo came across in the very late 1990s and was in a loving relationship for a few years before their nuptials.

Back in June 2014, Aviss Bell’s husband posted a sweet throwback photo of the duo from their wedding in the honor of their 13th anniversary. Moreover, in June 2021, the two will celebrate their 20th anniversary.

Despite their long-time marital relationship, they both have relatively kept most of their personal details behind closed doors.

After two years into a matrimonial relationship, Aviss and Coby began a family together and it was super surprising for the duo when they became parents of twins twice. They welcomed their twin girls named Jaena and Serrae on 21st June 2003.

In a 2007 interview with Archive, Coby, who played a football player Jason Pitts on comedy-drama The Game opened up about his experience being a father of twin for the first time,

“The day I found out my wife, Aviss, was pregnant I was running around screaming, dancing and acting a fool. Then when we realized we were having twins, I thought, We’re getting the two-for-one special!”

For the second wife, Aviss gave birth to their second set of twins, a daughter Quinn and a son Eli on December 2, 2008, at California’s Long Beach Memorial Hospital. Their baby-girl weighed 5 lbs., 12 oz, and was 19 inches long while their baby boy weighed 6 lbs., 13 oz. with the same length of measurement.

Coby told Life & Style magazine that the pair at first were trying for a boy but as fate would have it they ended up being blessed with a boy and a girl. He said,

“We were trying for a boy and ended up with a boy and a girl!”

Net Worth of Aviss Bell

Her estimated fortune is $1 million. She predominantly makes money from her multiple tasks. In the meantime, Aviss’s husband Coby’s net worth stands at $2 million.

The couple currently resides in Long Beach, California with their four children. As per public records, they purchased the mansion for $568,000 in early 2002. It has three bedrooms and two bathrooms in its 2,398 sq ft space.