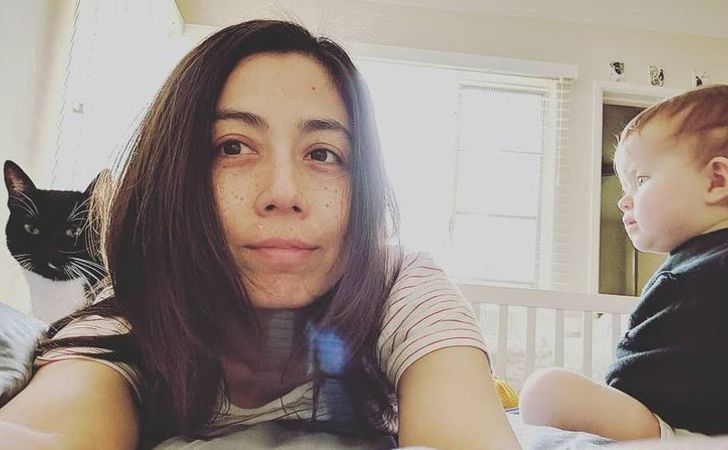 Born in a family of actors, Ayako Fujitani is an actress, writer, director, a film critic by profession, known for her work in the film ‘Tokyo.’ Besides, she is also recognized as the daughter of actor and producer Steven Seagal from his first relationship.

Apart from his professional accomplishments, Ayako is doing good in her personal life as well. She is married and also has two children with her husband. Well, who is her husband and how is their relationship as a married couple?

Further, in this article, we will also talk about Ayako Fujitani’s relationship with her parents and a lot more.

Who Is Ayako Fujitani?

Ayako is an actress, writer, and director. She is the daughter of Steven Seagal from his first marital relationship with martial arts instructor Miyako Fujitani. She was born Ayako Faith Fujitani, on December 7, 1979, in Osaka, Japan.

Likewise, Ayako also has a sibling Kentaro Seagal, who is also an actor known for his work in films like Death Trance, Seamless, Kidz Rule, and a few others. Not only this, but she also has five half-siblings, Annaliza, Dominick, Arissa, Savannah, and Kunzang Seagal from her father’s side. Well, like any sister, she shares a great relationship with all her siblings.

Talking about her education, she moved to Los Angeles after her schooling where she studied acting, filmmaking, and also learned the English language.

Ayako Fujitani is a Successful Actor and Writer in Japan

With a fluency in English and Japanese, Ayako Fujitani leads a successful career as a writer. She developed her interest in literature back when she was a teenager. She began her writing career working for a Japanese magazine named Roadshow. Very soon, she published her coupled novellas Touhimu (Flee-Dream) and Yakeinu (Burnt Dog), which highlighted her literary skills in the media.

Further in collaboration with the writer and director Hideaki Anno, Fujitani adopted Touhimu into a movie named Shiki-Jitsu in 2000. In fact, she even appeared in the film as an actress in the title role. The movie even received Artistic Awards at the 30th Tokyo International Film Festival.

Like we mentioned above, Ayako is also into theatre and films. She made her film debut in 1995, appearing in Gamera: Guardian of the Universe, at just 13 years of age. Following this, she appeared in Musashi and Gamera 2: Attack of Legion in 1996.

The beautiful Ayako is a married woman. She is married to writer and producer Javier Gullon. Having been married in 2016, the duo has already been together for four years now also shares two children, both daughters, from their relationship. Their older daughter Tora was born on December 6, 2016, and is currently 5 years of age.

On December 6, 2020, Ayako posted a photo of Tora on her Instagram wishing her fourth birthday. While Ayako has not revealed the details about their younger daughter Sumimo, she is around 4 years of age as of 2022.

Well, the family of four share a great relationship. Be it going on a family vacation together or spending a special time together, the family does not miss celebrating moments together.

Moreover, Ayako often shares pictures of her along with her husband and children on her Instagram.

Ayako Fujitani Parents: Her Father Is An Actor

42 years old Ayako was born to an actor father Steven Seagal and martial arts instructor Miyako Fujitani. Starting out as a stuntman in the 1982 film The Challange, Steven has gained a huge prominence as an actor and has appeared in many movies.

His first film appearance was in the 1988 film Above the Law, where he played the character named Nico Toscani. Some of his other successful works include Marked for Death, Executive Decision, Exit Wounds, Today You Die, and many others.

Her Mother Miyako Is The Fourth Wife of Steven

As we mentioned earlier, her father is married four times and her mother is the first wife of Steven. Her parents got married in 1974. However, almost 13 years into their marriage, the couple called it quits and divorced in 1987.

While still married to Miyako Fujitani, Steven had an extramarital relationship with American actress Adrienne La Russa. They tied the knot in 1987, but their marriage got annulled the same year.

Later, Steven married actress and model Kelly LeBrock. They walked down the aisle in 1987, but unfortunately divorced in 1996. As of 2020, Ayako’s father is in a marital relationship with Erdenetuya Batsukh.

Despite being the daughter of a famous father, Ayako Fujitani prefers to not use her father’s last name “Seagal” to her name. In one of her interviews, she has mentioned that she wants to be recognized for her accomplishments and as the daughter of a successful father. Further, she also mentioned that she has no hard feeling with her father and are good with each other.

I’m not keeping my father as a secret, but I just want to ignore it, We are good to each other, actually. We don’t have any weird things going on between us. We’re chill.

Well, Ayako rather goes with her mother’s last name Fujitani & is apparently very proud of it.

How Much Is Ayako Fujitani’s Net Worth?

As a successful actor and writer, Ayako has amassed a huge sum of money from her professional life. As of 2022, she has an estimated net worth of around $1 million. Her wealth is expected to increase in the future.