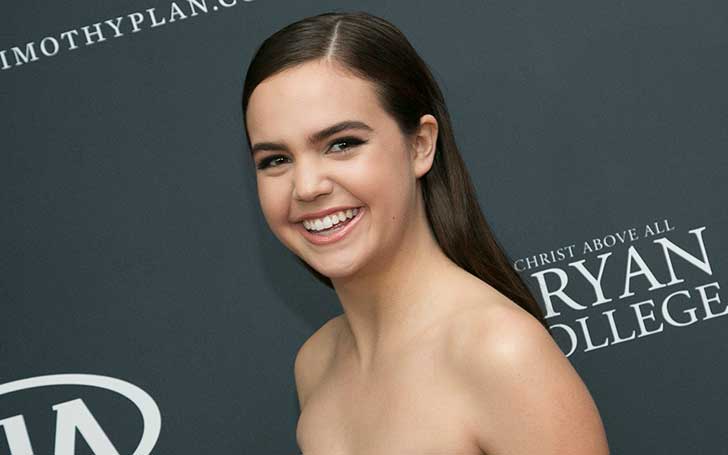 Actress Bailee Madison, who is famously known for her role as Snow White in Once Upon a Time, dated actor Alex Lange for more than two before they broke up in 2019.

Both the ex-lovebirds took the time to get back onto their normal life after the breakup. But, has the Good Witch star moved on? Who is she dating in 2022? Know all about her relationship history here.

Who is Bailee Madison boyfriend in 2022?

As of 2022, Madison, 22, is dating American musical artist Blake Richardson aged 22. The lovebirds were speculated to be an item for long before they confessed to being in a relationship. Madison took to her Instagram on August 5th, 2019, to confirm their romance.

The Good Witch actress shared their photo standing next to each other, looking annoyed and bothered, and wrote “When they ask you to confirm it” in the caption. Here is the post:

The pair had been sharing their photos on each other’s social media before the confirmation came. Moreover, they were also spotted in public places including holding hands when they went for a dinner date at Craig’s restaurant in mid-July 2019.

Even though Madison was revealed to be dating Richardson in August 2019, she didn’t mention when they started their romance. Well, they officially started seeing each other in April 2019.

It was revealed after Madison took to her Instagram on April 28th, 2020 marking their first anniversary as a couple. She wrote “A year with you” alongside the post. Here is the post.

Madison resides in LA, California and her boyfriend Richardson lives in London, the U.K. They both have a tight work schedules and due to their busy lifestyle, they couldn’t get together for their first Valentine.

Meanwhile, Madison shared a photo of them walking on the sand and looking at each other on Valentine’s Day. She wrote: “my valentine… I love you. Happy #NewHopeClub album release day!” in the caption.

Before Madison started dating Richardson, she was in a relationship with South African actor Alex Lange. Madison and her ex-beau started dating in September 2016. Though the couple openly showcased their relationship in the public, they didn’t reveal much about themselves for more than two years.

In December 2018, the Wizards of Waverly Place actress opened up about her relationship with Lange on her podcast Just Between Us. The podcast hosts Bailee and Kaitlin Vilasuso both brought their other halves to the show and discussed their relationships.

There, Alex said he had confessed his love to Madison on the first night they met at the opening of a clothing store. Moreover, he also said, he kept on saying “I love you” to her every night for the next six months before Madison said it back.

The podcast host added for the first three months, they only talked on the phone before they saw each other again. After their second meeting, their conversation extended and they started texting each other until 5 in the morning. And the love blossomed gradually.

What Led Them to Breakup?

Just a couple of weeks after they shared their sweet love story in the podcast, Madison and Lange ended their relationship. And the breakup came as a surprise to all of their fans and the media as well. A source close to the couple exclusively revealed their split to Entertainment Tonight in early January 2019.

At the time, the source revealed that Madison and Lange separated a couple of weeks before (December 2018). However, the source didn’t open up anything about the cause that led them to end their romance abruptly.

Bailee Madison’s first relationship after she rose to the limelight was with singer Emery Kelly. Kelly is an American singer and was a contestant on the singing reality series, The X Factor.

Madison and Kelly reportedly started dating in May 2015. The pair was open about their relationship with the public. They were frequently spotted in public places over the course of a couple of months.

In November 2015, they called it quits. At the time, both the ex-lovebirds remained mum about their sudden breakup, however, in February 2016 Madison talked about the split. She told Teen,

It was hard because it was my first thing in the limelight, everyone saw it.

I didn’t know at the time what it was, and then when things started happening personally that I couldn’t necessarily talk about everyone started to form their own opinion.

She was Rumored to be Dating Zachary Gordon

In 2013, Bailee Madison was rumored to be dating Zachary Gordon. Gordon is a 24-year-old American actor famous for his roles in television series like Dead of Summer, Bubble Guppies, and Uncle Grandpa among others.

They met on the set of the 2013 movie Pete’s Christmas in which Gordon plays the titular character. They became close friends and thereafter were spotted together on multiple occasions, which sparked their romance rumor.

Neither Madison nor Gordon responded to their romance rumor and it faded into the thin air within a couple of weeks.