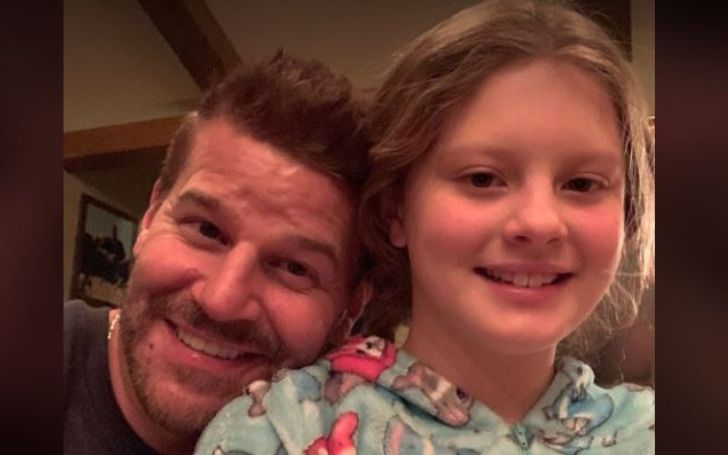 Bella Vita Bardot Boreanaz is a young Equestrian who is better known as the daughter of actor David Boreanaz. Her father is known for playing FBI Special Agent Seeley Booth, a homicide investigator, on the Fox television crime procedural comedy-drama series Bones (2005–2017).

David is also famous for portraying United States Navy SEAL Master Chief Special Warfare Operator Jason Hayes in the CBS military drama series SEAL Team. Boreanaz had his daughter Bella with his wife, Jaime Bergman, a Playboy alum with whom David has been together since the year 2001.

This celebrity kid of Boreanaz and his wife although young has quite a number of achievements that only shows the promising future she’s going to have with the time. See her so far in life as the child of a famous TV star, her relationship with her father, and more.

Paternal wise, Bella, who was born on the 31st of August 2009 – is descendent of Italian-Slovenian ancestors.

Her father’s American heritage is based almost entirely in Pennsylvania and New York, but three-quarters of her paternal family tree crosses the pond rather quickly.

Bella’s father is half Italian and one-quarter Slovak. The last quarter is steadily back in Pennsylvania and eventually leads to Irish and German immigrants. Boreanaz also has some additional hints of French and Swiss roots.

Bella’s maternal grandparents, on the other hand, are from Salt Lake City, Utah.

Boreanaz said conceiving Bella was a little bit harder as they tried for about a couple of years. In Sep 2009, the Buffalo-born actor said,

“We’ve been trying to have another baby for a couple of years now so we are beyond excited, we’re over the moon.”

Just when David’s wife was about to give birth to Bella, the CBS star said,

“Jaime’s pregnant, we’re doing construction at the house, and I’m just pulling my hair out. I didn’t go to Comic-Con because the baby was going to come at any minute. We’re just waiting and waiting. It’s nerve-wracking, extremely, [but] I finally just decided that it’s going to come when it’s going to come.”

Also during the time, Jaime was on bedrest and David had to stay close to home in case she went into labor. Boreanaz once in an interview mentioned he maintained a 20-mile radius when the due date was around the corner. The former extra in Men Don’t Tell forbade himself to travel beyond that.

The Meaning Behind Bella’s Name; It Was Originally Something Else

Prior to the delivery date, David Boreanaz saw a photo of Brigitte Bardot by Douglas Kirkland from Spain – 1967. During an appearance on Live with Regis and Kelly, the Bones star said it was actually a Douglas Kirkland photograph of the famed actress that reeled him in, a mere two weeks prior to Bardot’s August 31st birth.

As per Boreanaz himself, the picture represented energy and it was the essence of the photograph that kind of moved him from within. David remembering the incident said,

“I walked in and she was doing this little kind of a pose and it caught my eye…it was a reflective shot through a mirror – quite a shot, so it kind of hit me hard. It was the energy. The essence of that photograph kind of got me moved. It hit me hard,”

In 2013, David said Bella being adventurous and playful often reminded him of himself as a child. Boreanaz at the time described her daughter as so outgoing and the one who liked to jump around from one couch to one chair. Bella then reportedly was a bit of a hurricane.

And from a young age, she has been very independent and free-spirited much similar to her father, Boreanaz admitted. Apparently, Bella has also been the one from the Boreanaz family who had it easy getting her way with things while growing up.

David once revealed his daughter could get away with things because she had kind of really become a daddy’s girl.

Bella Is A Dancer Turned Equestrian

Bella took some Ballet Lessons when she was way younger; it was around the same time when her elder brother, Jaden was a high school ice hockey player. She likewise used to play softball and ride big horses.

It, however, is the latter that she is now pursuing seriously. In fact, Bella is now an Equestrian.

It all began in 2017 when Bella’s family leased her a horse named Charm for her so that she could learn how to ride on doing both jumping and dressage. In 2019, she, however, had a new horse named Romeo.

As a child Equestrian, Bella is the winner of the 2021-2022 Interscholastic Equestrian League Overall Freshman Hunter. David and Jaime’s daughter was in sixth grade when she won the competition.

After she won the Interscholastic Equestrian League Overall Freshman Hunter, Bella’s mother took to her Instagram to celebrate her daughter’s achievement and wrote,

🎉 Bella is the 2021-2022 Interscholastic Equestrian League Overall Freshman Hunter Champion (even though she’s in the 6th grade). We are so incredibly proud of you Bella! Go Eagles 🦅 Thank you @futurity_farms!! #equestrianteam #hunters #seasonchampions

Bella’s other achievement as a professional horse rider includes winning Overall Champion for her middle school in the freshman division.

Bella Vita Bardot Boreanaz Was Also On The Show Bones

Much like her brother and mother, Bella was also on a Bones episode. She appears in the episode, titled, The Movie in the Making where she plays one of the children in Christine’s classroom when Brennan visited to talk about her job. In addition to that cameo, Bella has also participated in a community play – playing Oliver Twist in 2019.

Her Elder Brother Jaden Rayne Boreanaz Is A Musician And Singer

Bella’s brother, Jaden Rayne Boreanaz was in the travel hockey program during the early 2010s and had also spent the summer of 2012 at the Heartland Hockey Camp in Minnesota. As a high school ice hockey player, Jaden was the winner of the regionals and had advanced to the nationals in 2017.

Of recent, Bella’s elder brother, however, is a singer and musician who has so far released a handful of singles.

He started publishing his own music in 2021. Bella’s brother who is on Spotify as Jaden Rayne has monthly listeners of about 3679. In the meantime, he is also the owner of a clothing line called Pulse Los Angeles.

Bella’s parents, David and Jaime met each other at a Playboy party in 2001. They married the same year in November. Bella’s mother, Jaime Bergman, born, on September 23, 1975, in Salt Lake City, Utah, is an ex-model and actress who was Playboy magazine’s Playmate of the Month in January 1999, 45th Anniversary issue.

Although Jaime and David have been together since the early 2000s their relationship suffered a major setback in the late 2000s.

That year Bella’s father confessed to cheating on Bella’s mom with an unidentified woman. It was during the time when Bella was about to get born. Apparently, Boreanaz had been also paying her some money so that the matter could not get out in public’s knowledge including his wife.

Later, the actor himself decided to come clean after he reported that his mistress started to ask for more money and threatened him. In addition to all the aforesaid scandals, there was also the affair Boreanaz had had with ex-Tiger Woods’ mistress, Rachel Uchitel.

In this case, there reportedly were some explicit text messages between Uchitel and Bella’s father when they were having affair behind Jaime’s back.

Jaime and Boreanaz, despite all these, reconciled and salvaged their union with the latter saying the infidelities of his made his relationship with the mother of his children even stronger.

How Rich Is Bella’s Father, David Boreanaz; What Is His Net Worth?

Bella’s father, David  Boreanaz’s net worth has been consistently in motion since the early ’90s and the Valentine actor is certainly among the wealthy TV actors. His net worth is estimated at around $30million.

Even before his hit series, Bones, he had already been a regular in another household show, Buffy The Vampire Slayer. And while his exact payscale from that time frame is all but guesses and speculations, he sure must have racked up a couple of hundreds of thousands of dollars for playing Angel.

Worth mentioning he also went on to have his self-titled spin-off, Angel; another one of his income avenues. The figure that is worth talking about though is the $250,000 per episode he received for his time in Bones. And that’s over 200 times starting from 2005. Not to mention, he also earned additionally as the show’s producer in its latter seasons.

In addition to royalties, he very likely also has the 2019 lawsuit case against Fox to thank for his additional wealth; the studio had to pay the Bones stars a whopping $178million and additional plaintiffs.