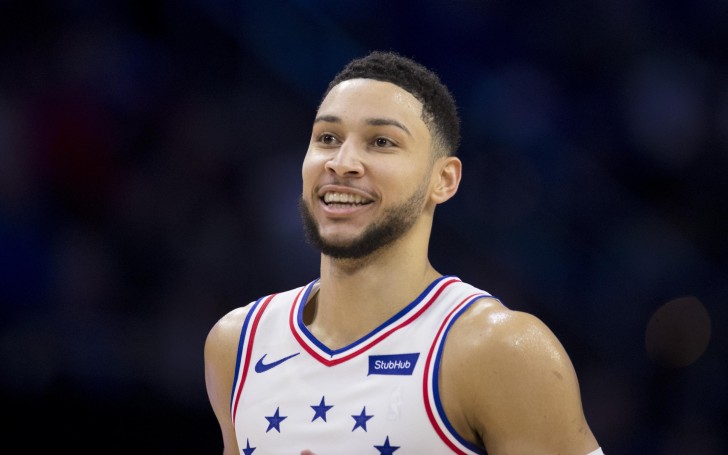 The topic of Ben Simmons’ girlfriend is something that is often searched all over the internet. No surprises here as the Australian basketball player is eye candy for the ladies. This makes him a hot commodity for the paparazzi.

Ben has had his fair share of dating affairs in the past. The hunk has gone out with a handful of celebrities and all of them were A-listers to boast. Now the big question here is, who is Ben Simmons’ girlfriend now?

Today we’re going to find out about his current relationship status. Let’s get right into it!

Who is Ben Simmons’ girlfriend?

At the moment, Ben is in a relationship with English TV and radio presenter, Maya Jama. What’s more, they are not just dating, but are also engaged. According to the Sun, Ben secretly proposed to his girlfriend and she said, ‘Yes.’

While talking about the engagement, a source close to the pair stated, “Ben adores Maya and has fallen head over heels for her. He picked up the ring on Jewelers’ Row in the diamond district of Philadelphia the day before he proposed.”

Initially, the pair first started dating in May of 2021. They seemingly confirmed their love affair during the 2021 Wimbledon when they were spotted kissing. Although the pair lives in two different countries, it is said Maya is all set to make her move to the United States to be with her future husband.

Talking about Maya, well, she is a big name in the UK. So far, she has presented several renowned shows including BBC One’s Peter Crouch: Save Our Summer, Glow Up: Britains’ Next Make-Up Star, Trending Live!, Cannonball, and more.

Jama was born on 14th August 1994, to a Somali father and a Swedish mother. She holds triple nationality of Sweden, Britain, and Somalia.

Initially, news of Ben’s romance with Jasmine came to the surface in late 2020 when the Sixer’s star was spotted with a mysterious lady in West Hollywood.

At first, eagle-eyed fans claimed the lady was the Instagram model, Yovanna Ventura. What made the speculation stronger was the fact that Ben was following the model on Instagram. Nevertheless, tabloids, later on, turned their eyes towards Jasmine.

Fans somehow were able to connect the dots when Rae was spotted partying with Ben in Miami. Jasmine then put the final nail in the coffin after she arrived in Philadelphia in December of 2020, in the middle of a pandemic. Well, one doesn’t go anywhere in such odd times unless they’ve someone special on the other side, isn’t it!

She also shared a story from the day she landed in Philly!

Regardless, even if they were dating, the pair always kept a low profile. Just like his previous affairs, Ben laid low. The twosome never shared a single picture of them together on their respective social media account.

Who is Jasmine Rae?

Ever since the name got into the mainstream media, people started asking a lot about Jasmine. And why wouldn’t they? After all, Rae rumoredly dated future NBA Hall of Famer, Ben Simmons.

Talking about her career, she is an Instagram model and a very successful one at that. As of writing this article, she has more than 864k followers on Instagram which is quite an impressive feat. Moreover, she is represented by the Scout Modeling Agency.

The current relationship between Ben and a hot model isn’t the first time he has been linked with a vivacious beauty. Let’s talk about all of them one by one.

Back in June of 2017, he was in a relationship with the former Women’s Basketball player and now a rapper and model, Dylan Gonzalez. Their relationship was rather short-lived and ended after a couple of months in November of the same year. Besides, they had kept their romance under the radar because of which there are no details about their relationship.

After breaking things up with Dylan, the player from the land down under started dating American rapper, Tinashe. The former flames dated for a couple of months in 2018.

They seemingly confirmed their romance rumors in March after they shared similar pictures on their Instagram handles. After going their separate ways, Ben has since deleted the post, but Tinashe has kept the post.

Now talking about why they broke up, apparently, it was because of Tinashe’s show-off nature. A source close to the Basketball star claimed that Ben was tired of Tinashe doing Kardashian ‘sh*t’. The source told MTO News, “She is way to [sic] public with everything. They just started dating and this girl is calling up paparazzi.”

Apart from his link-ups, Ben was once accused by trans Instagram model Amani that he asked her to hook up with him and five of his teammates simultaneously. However, later on, it seemed like Amani was putting up fake information on the internet for clout.

Of all the girls Simmons has dated, his love story with Kendall gained the most prominence from pop culture. Though there is no exact time as to when they started dating, numerous tabloids claim they started going out in May of 2018.

Around the same time, various tabloids also mentioned that Ben was hanging out with Jenner while he still had not broken up things with Tinashe.

Their relationship quickly became a hot commodity among the media and fans alike. While they were dating, Kendall used to attend many of her former beau games. Nevertheless, their relationship ran its course and they split up in May 2019, a year after they started dating.

Even though the exact reason behind their separation is not known, fans think it might be due to the physical distance between them. While Kendall was spending most of her time in Los Angeles, Ben was living in Philadelphia due to his team commitment. Despite all that, the duo had separated on good terms so we might see them back together in the foreseeable future.