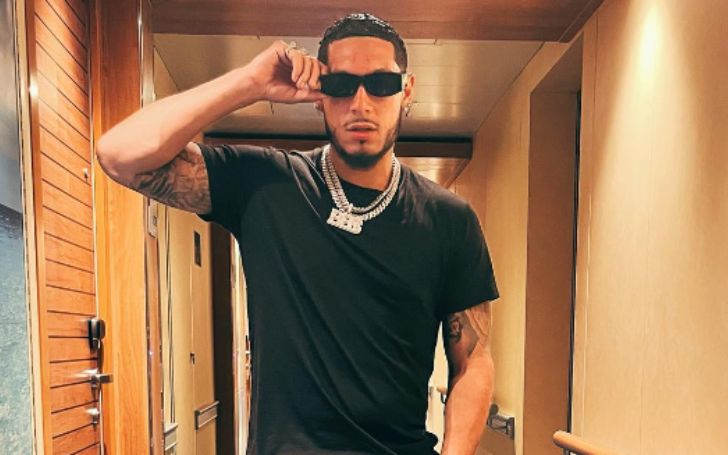 Brandon Bill$ or Brandon Curiel is a singer-songwriter and social media influencer. The 30-year-old rapper came into the limelight after releasing his hit album, Nysd in 2019. Today, Bill$ is famous through his YouTube channel and Instagram where he mostly posts about his lavish lifestyle and music.

Recently, however, Brandon had the spotlight hit him for his controversy with a fellow rapper. Can you guess who that was? It was DaBaby, and apparently, the two of them had a huge fight in a bowling alley. So, what was the reason behind it? We will know soon.

Here, in this article, we will dive deep into the life of Brandon Bill$. Did you know that his sister is the famous singer, DaniLeigh? Sit tight, because we will know the answers further. So, let’s get started!

Brandon Bill$ Is The Only Son of His Parents

Brandon Bill$ was born with the name Brandon Curiel on 9th April 1992 to his Dominican parents. Vickey Curiel is his mother and Vladimir Curiel is his father. Little is known about his dad but Brandon’s mom, Vicky, is a talent manager and the founder of International Hub Records (IHUB). His parents have been together for 35 years as of 2022.

He is the only son of his parents, meaning, Bill$ has two beautiful and talented younger sisters. Danielle Leigh Curiel or DaniLeigh and Brianna Leah are his siblings. DaniLeigh is a famous musician on her own and Brianna is also in showbiz as she is a member of a Latin pop group, Bella Dose.

He Had A Decent Childhood

Growing up, Brandon had everything – loving parents, siblings, and a healthy environment. His mother’s Instagram handle is living proof of this. She still posts childhood pictures of the Lobby singer and his sisters and seems to love her kids to bits. A little research from her IG also helped us find out that Brandon was into music from a very young age; we can see him playing violin in one of the photos.

Looks like this hip-hop-loving rapper knew what he wanted to become since he was a little boy, and we’re so glad he did.

Brandon Curiel to Brandon Bill$; His Career In the Music Industry

Curiel is famously known by the name, Brandon Bill$ on the stage. We do not know much about his education, but this rapper had professional training in music and has been into it since a very young age. Moreover, he really has come a long way.

Brandon became famous after releasing his first album, Nysd in 2019. His songs, Unlimited Skills, BUMBUM, Look at They Faces, Under Attack, and Chunky Chains are also loved by many people. In addition to this, he has worked with some famous singers/rappers, including Snoop Dog. 675340 Records DK is the record label that has signed this talented rapper and also produces most of his music.

He Is Also Famous On Social Media

Today, this 30-year-old is a social media sensation as well. He has a lot of fan-following on Instagram as well as YouTube where the Fell in Love with Me rapper posts about his lifestyle and music. As of 2022, he has over 129k followers on Insta.

Besides this, Bill$ is also famous as the elder brother of DaniLeigh. She is a multi-talented musician, rapper, dancer, and choreographer. Dani got her big break by working with Prince on his music video for Breakfast Can Wait at just 18 years old. Brandon has also collaborated with his sister on many songs and the brother-sister duo appears together in many shows.

Is Brandon Bill$ Single or Dating A Girlfriend?

Brandon is very open about his life but is private about one thing – his love life. We can see pictures of him hanging out with gorgeous models but we do not know for sure whether he is dating someone. Maybe this hip-hop lover is just focusing on his career and does not have enough time to indulge in dating, or he could just be very private about his love interest.

Regardless, when Bill$ does come out with the name of the woman of his dreams, you all will be the first ones to know. So, let’s just stay patient and wait.

Looks like Brandon does not have any plans to tie the knot anytime soon. He is not married and he does not intend to do so at present. Well, we might have to wait for a while before we get to see his wife.

The Fight Between Brandon Bill$ and DaBaby

February 9, 2022, was a bad day for both Brandon and his sister’s ex-boyfriend, DaBaby.The two rappers got into a fight at an event organized by London on da Track at the Corbin Bowl, a bowling alley in Clopagana, California.

It was a pretty brutal fight and people are blaming DaBaby or Jonathan Kirk for it. A video of the fight that went viral clearly shows Kirk and his crew members attacking Bill$. The attackers are seen dragging and beating, and pulling the rapper’s hair mercilessly. Everything happened all of a sudden that left Brandon in shock and with deep physical and mental scarring. He also shared a story on his IG showing the cuts and bruises that he got from the fight.

Following this, Curiel sued DaBaby for assault and battery, emotional distress, and negligence.

So, what was the reason behind all this? We don’t know quite clearly. Most people believe that it was the post-breakup drama between Brandon’s sister and Jonathan Kirk. It could be, because following the incident, DaniLeigh posted this on her Instagram,

“Lame as hell!!!! Running up on my brother on some slippery a** floors with 5/6 of ya boys while he’s by himself and not even touching him!!! Lame and soooo sad!!! I pray this stops now !!! BC this is my family! and I got a daughter to raise. Sad 💔”.

It was an unfortunate event that occurred almost 8 months ago. We just hope Brandon got the strength to move on from this properly.

The 30-year-old Rapper Brandon Bills Net Worth: Has a Lavish Lifestyle

By now you can guess that Brandon Bill$ is a wealthy man. He stands at a net worth of $2 million dollars and shows off his lavish and expensive living through his Instagram.

Along with him, his family also seems to be pretty well-off. His younger sister, DaniLeigh has a net worth of $5 million dollars and his mother, being the CEO of a talent agency must also earn millions. Similarly, Brandon’s other sister, Brianna is a member of Bella Dose which also must provide her with a steady income.

Who Is Andrew Davila? Inside His Personal & Professional Life

Who Is Ashley Tervort? Her Age, Career, Boyfriend, Net Worth