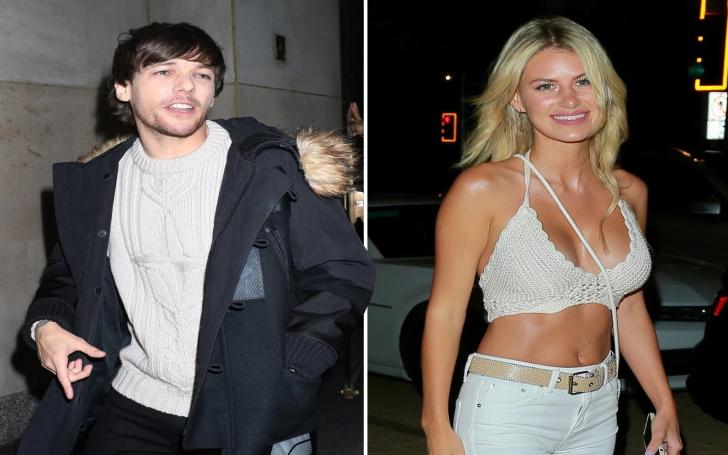 Briana Jungwirth is a hairstylist who is better known to people as the ex-girlfriend of the famous boy band One Direction member Louis Tomlinson. She is also known for being the mother of Louis’ first child Freddie Reign Tomlinson.

Even though her romantic relationship with her ex-partner Tomlinson is very short-lived, the stylist has been on the media radar for various reasons. Multiple controversies surround her, including faking pregnancy, legal battles over her newborn, Twitter lash between Briana and Louis’s new girlfriend, Dannielle Campbell, and more.

Similarly, she has also been in a relationship with American singer-songwriter Jayk Purdy. So, how did that turn out? Is she still in a relationship with her boyfriend? Where is she now? There are a lot of things that people don’t know about Louis Tomlinson’s ex. Hence, in this article, we will discuss all the matters and queries regarding Briana Jungwirth. Let’s go!

Who is Briana Jungwirth? Details on Louis Tomlinson’s Ex-Girlfriend

Briana was born on January 26, 1992, in California, the United States to Tammi Clark, and Joe Jungwirth. While her mother is a former model and actress and her father is a construction manager. Talking about her age, she is 30 years old as of 2022.

Her parents separated when she was 10. Soon after their divorce, her father married Karen Lawrence in 2007 and her mother is in a relationship with Brett Clark. Briana has a half-brother named Austin Clark.

Talking about her ethnicity, she has a mixed ethnical background and is American as per nationality.

Similarly, she completed her high school at Agoura High School in 2010, however, not much is known regarding her higher studies.

Briana Jungwirth is a Hairstylist by Profession

As we said, she is an American hairstylist by profession. As a professional, she also worked as a personal stylist for a while. However, unfortunately, her professional status at present has remained away from the media.

Despite the fact that she is successful in her career, she only became the talk of the town after her relationship with her ex-boyfriend Louis Tomlinson went public. He is a singer and a member of the famous boy band One Direction.

Louis Tomlinson is an English singer and songwriter. He was born Louis Troy Austin on December 24, 1991, to Johannah Poulston and Troy Austin. His career as a singer started in 2010 when he auditioned for The X Factor’s music competition. He was eliminated as a solo performer but later performed in a group of four which was later named One Direction.

The group debuted with the song What Makes You Beautiful on August 19, 2011, which was a great hit. With a lot of hit songs and albums, the group was having a blast together. However, since 2015, One Direction has been on hiatus and all of the members have been working on their solo careers.

Tomlinson debuted with the solo song Just Hold On in December 2016. It was number two on the UK Singles Chart. Similarly, in 2017, he released another song Back to You with Bebe Rexha. He also appeared on Debrett’s 2017 list as one of the most influential people in the UK.

When did Briana and Ex-Boyfriend Louis Start Dating? Any children?

The former couple Briana and her then-boyfriend Louis first met when they were introduced by a mutual friend in April of 2015. The two started dating and their relationship went public after they were seen together on multiple occasions.

After months of dating and being together, it was revealed that Briana was pregnant with Louis’s child. She gave birth to their son Freddie Reign Tomlinson on January 21, 2016. Briana’s family even nicked name him as a miracle child because his birth made them rebelieve in religion.

Just for a fact, the One Direction band member was previously in a relationship with his longtime girlfriend Eleanor Calder up until March 2015. However, after the split from Briana, he began dating Dannielle Campbell.

Briana Jungwirth & Louis Fought for Custody of Their Son After Split

In July of 2016, the stylist became furious at Louis’ then-girlfriend Dannielle Campbell on Twitter for trying to become her son’s mother. Louis didn’t take it lightly and criticized her for doing so. Following the incident, Briana didn’t allow the singer to see his son making him take legal action against her.

The former couple fought for Freddie’s custody and later reached an agreement of allowing Louis to visit his son with an exception of no overnight visits. Freddie lives with his mother in their beautiful house in Los Angeles California.

Louis Tomlinson’s ex-girlfriend Briana has been in a fair share of controversies over the years. In one of the articles published by Ecumenical News, people accused her of using others’ photos as her own and even accused her of photoshopping the image of her baby. Some say that she faked the pregnancy because Tomlinson is gay and he didn’t want others to find out about it.

However, Briana didn’t stay quiet about the allegations, instead said this on her Twitter

“To create such a disgusting lie and to stir up so much trouble is unacceptable. I’ve never stolen any photo. It’s sickening how I’ve been treated throughout my pregnancy and now.

I’m tired of the bullying and harassment. I have a newborn son; this is a time-sensitive part of my life where I should be enjoying every minute.”

After splitting up with the One Direction singer Louis Tomlinson, she was reportedly in a relationship with singer and After Romeo member Jayk Purdy. A friend of Purdy’s shared a photo of them at a concert in October 2016. Similarly, Briana also shared a photo of her and Purdy going out for dinner with her family. However, their relationship was also short-lived; she even tweeted her account saying that she got toyed with. Many people claimed her to be a gold-digger and attention seeker.

Later on, she was in a couple of relationships including with Brody Jenner, stepbrother of Kiley and Kendall Jenner, and Michael Straus.

Briana Was Engaged To Nick Gordon: Her Wedding Plans

Apart from all her relationships, Briana was also in on & off relationship with Nick Gordon. Well, back in September 2020, there was also news of their engagement where Nick had apparently popped the question on the getaway to Las Vegas.

The hairstylist Briana even shared a post on her Insta posing alongside her new partner Nick in Sin City. In the caption, she wrote,

10 years of knowing you and I knew all along you were my soulmate. I love you!

Following this up, Nick also posted a beautiful photo on his Instagram with a caption that reads, “Never lost when I’m with you.”

Further, Briana’s mom also congratulated her on this beautiful decision. In her Insta post, she wrote on September 26, 2020,

The stylist’s mom, Tammi Clark, confirmed the news on Friday, September 26. “Congratulations to our beautiful daughter and fiancé on their engagement,” she captioned a group photo featuring the couple via Instagram.

Congratulations to our beautiful daughter and fiancé on their engagement,

As of now, it has been over 2 years since they engaged. So are they married? Well, unfortunately, there are no updates on whether they tied the knot. In fact, it is also unclear if they are even together at present. We hope they open up about the matter soon in the future.

Briana Jungwirth Ex Michael Straus, Filed a Lawsuit Against Her

Her ex-partner Michael Straus sued her for $5000. In an interview, Straus said that the two were dating. However, after lending her $5000 she broke up with him after two weeks and used that money for a boob job.

He further elaborated saying “it was the worst mistake of his life. All I want is for her to pay me back. She borrowed the money under false pretenses.” In an email with the magazine he said:

“I haven’t seen Briana in over a year. We were speaking for the first three months of the pandemic when I was helping take care of her and her son by sending them groceries and supplies.

She even got me to buy the kid a new iPad. I finally realized I was getting used and cut it off. I haven’t spoken to Briana since June. I sent her an email demanding the money the day before I filed the lawsuit because it is required by the courts.”

All things considered, Straus still doesn’t think he could get the money back.

How Much Is Briana Jungwirth’s Net Worth?

She is estimated to have a total net worth of $1 million which she has accumulated from her career as a hairstylist. She also added to her fortune from the money she received as child support from her ex-boyfriend Louis.

Whereas, her ex-boyfriend Louis is estimated to have a total fortune of a whopping $70 million which he has accumulated from his career as a singer and songwriter.

Yes, the stylist is on Instagram (@brianasrealaccount) where she has 619K followers where she posts pictures of herself and her son Freddie. Similarly, she also has a Twitter (@realbjungwirth) account with 44.6K followers.

Who is Candice Brook? Her Relationship With Boyfriend Leroy Sané