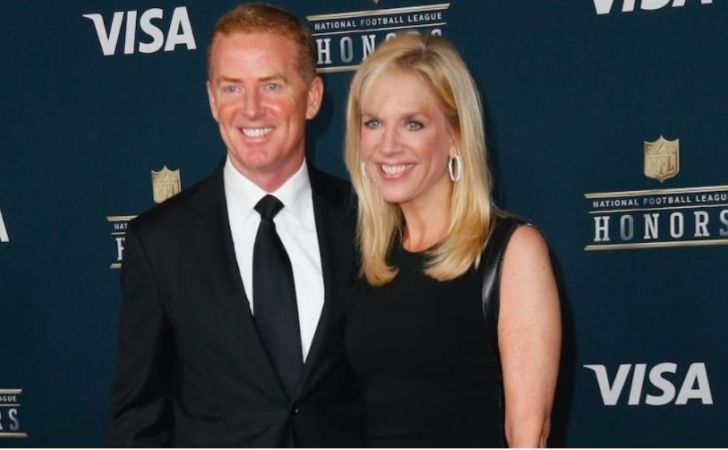 A law graduate from Harvard University, Brill Garrett is a literacy advocate by profession. Besides her professional career, she is also famous as the wife of a former football player & Dallas Cowboys coach, Jason Garrett. As of 2021, her husband serves as the offensive coordinator of the New York Giants.

Brill is now married to Jason for over 2 decades and their bonding as a married couple has only flourished. Apart from their marital relationship, there is a lot more about her that is untold and unexplored.

So in this article, we are going to unravel all the details about her life. Let’s get started.

A blond beauty Brill Garrett was born on December 8, 1965, in Illinois. The 55 years old is the daughter of father Jeffery Aldridge and mother Judy Aldridge. Well, like any daughter, she shared a great relationship with her parents.

But unfortunately, her father is no more; he reportedly passed away in November 2019. She also has a younger brother named Jeff Aldridge but his whereabouts are unknown at present.

Talking about her education, Brill did her schooling at Central High School in Hinsdale, Illinois, where she studied from 1980 to 1984. After finishing her schooling, she joined Princeton University and eventually graduated with a law degree from Harvard University, Cambridge, Massachusetts.

Brill Garrett Is A Literacy Advocate By Profession

Not many know but Brill is a literacy advocate. She has been a voracious reader all her life, and she is pretty aware of how big of a positive impact education can bring upon lives. Thus to promote education, she has taken part in several events.

Around a week prior to the event, Brill even sat for an interview with 5 Points Blue, talking out about the importance of literacy. Further, she also focused on the fact that education is not just meant for children but adults as well. She said,

No matter what your political persuasion, everyone agrees that all of us should be able to read and it’s something that we should be teaching in our schools, we do teach in our schools, but we need to make sure that we’re allowing children to know how to read and then have that tool to enjoy it

Well, in course of her run to promote literacy, she has participated in various reading advocacy programs including The Cowboys Association at Gabe Allen Elementary School in South Dallas. Moreover, she is also associated with the Cowboys Wives Association, which includes famous former players, coaches, and their families.

Brill Garrett Is The Wife Of Football Coach Jason Garrett

Like we said earlier, Brill Garrett is married to former player and football coach Jason Garrett. The husband and wife married in 1994, in a very small wedding ceremony. Only a few of their friends and family members attended their wedding.

As of 2021, the couple is married for 27 years and their marital relationship seems as strong as ever. But how did their relationship begin? Well, that’s an interesting story.

The couple reportedly met a lot before they actually decided to walk down the aisle.

The Duo Met At Princeton University

Like we said earlier, Brill and Jason came to know one another a lot before they became a married couple. As per the reports, they met during a geology lecture at Princeton University, where she studied to earn her undergraduate degree.

In a radio interview with 5 Points Blue, she stated that she took notice of him in a lab, which she attended once a week.  But they didn’t get to talk for a long time as Jason would leave the class soon on daily basis.

Eventually, after a long time, Brill finally asked him the reason she left the lab earlier to which he said that he had baseball practice. She said,

We would have a lab once a week and the lab was on Thursdays from one until four and so I, of course, noticed him early on. I realized he left the first lab early, and the next week he left lab early, and then the next week… so I thought, what is going on? I gathered my courage and I asked him, ‘Why are you always leaving lab early?’ And he looked at me like, ‘Well, don’t you know I have baseball practice?

That day on, they developed a good friendship which eventually turned into a romantic relationship and eventually into marriage.

Does Brill Have Any Children?

Besides, Jason is one of three brothers, from whom he has nieces. He shares a great relationship with them and they even attend their family occasions and get-togethers. Apparently, neither Brill nor Jason feels the need to have any kids.

Brill Runs A Charitable Foundation With Her Husband

Well, Brill along with her husband owns a foundation named Jason Garrett Starfish Charities. The duo established it in 1997 and it aims to help young and upcoming talents in various schools and colleges and gain footing in the sports world.

Besides, the foundation also encourages literacy and reading at Gabe Allen by hosting a book club. There, the students are given appropriate books to read.

How Much Is Brill Garrett’s Net Worth?

Like we said earlier, Brill is a successful advocate and as a professional, she makes a decent earning. However, she has not revealed her exact salary and net worth.

On the other hand, her husband Jason has a salary of $6 million. Likewise, his net worth sits at $18 million, as per Celebrity Net Worth.