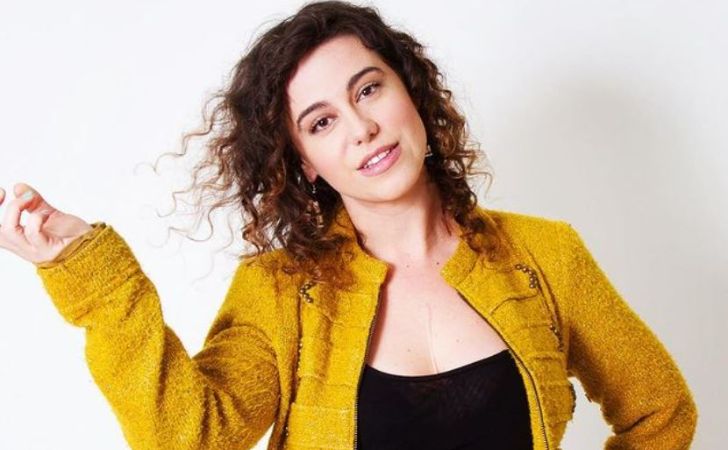 Caley Chase is an American actress, writer, & producer known for her works in Before I Sleep, You’ll Be Fine, & others. Besides her contribution to movies and TV, she is also recognized as the daughter of famous actor and comedian Chevy Chase.

Well, as a celebrity daughter and a successful actress, she has achieved immense fame and fortune. In fact, she is often a subject of media scrutiny. So, how is her life at present? Is she married or dating a boyfriend?

In this session, we are going to talk in detail about Caley’s career, relationship, net worth, & much more.

Caley Chase Is The Daughter of Chevy Chase

A beautiful actress Caley Chase was born as Caley Leigh Chase on February 23, 1984, in the United States. She is the middle child of father Chevy Chase and mother Jayni Chase.

Growing up in a well-to-do family, Caley had a decent upbringing. In fact, she shares an incredible bond with her parents, especially her father. She loves spending time with him and there are numerous photos of her with her dad on her Instagram which reflect their bonding.

Well, Caley has two siblings, an older sister Cydney Cathalene Chase and a younger sister named Emily Evelyn Chase. While Cydney was born on January 4, 1983, whereas Emily was born on September 29, 1988. However, unlike her sisters are not into acting.

Besides, like any siblings, she shares a great relationship with her sisters. Moreover, they are often seen together in public events which reflect the bond they share with one another.

Caley Chase Is Into Acting, Writing, & Producing As Well

Like we said earlier, Chevy’s daughter Caley is pretty much successful as an actress. She is not just an actress but a professional writer and producer as well.

Talking about her acting career, she made her debut in 2005, where she appeared in a short film Shakes. She took a break of over 5 years before she made an appearance in another short film Hotel Hell Vacation.

Her first major role came in 2011, where she played a character named Polly in a Gingerdead Man 3: Saturday Night Cleaver. In 2013, she played Geena in the movie Before I Sleep.

Similarly, in 2015, she played Sally in two episodes of TV series named You’ll Be Fine. Some of her other works include A Christmas in Vermont, Going Viral, 400 to Oahu, to name a few.

Moreover, she is also set to appear in the upcoming movie Please Stop Talking. In the movie, she will portray a character named Meagan.

Her Parents Are Married For Around Four Decades

Not many know but Caley’s parents Jayni and Chevy are married for around four decades. The couple married on June 19, 1982, in a beautiful wedding ceremony in Pacific Palisades.

At the time of their marriage, Jayni was in her 20s whereas Chevy was in her 40s. Though the duo has a huge age gap, they have been leading a beautiful marriage all these years and share a great relationship.

In 2021, Caley even wished her father and mother their 39th wedding anniversary. She took to Instagram, where she shared a beautiful photo of her dad and mom and wrote a beautiful message saying,

Happy 39th Anniversary to these goofballs! I have such incredible parents. Seriously, I’m so lucky. You are so fun and silly and loving and smart and talented. And attractive. The most attractive parents. Thank you for everything, I wouldn’t be anything without you- literally 😆💗

Hopefully, their relationship continues the same way in the years to come.

Besides Jayni, Chevy was married twice earlier. He was first married to Susan Hewitt on February 23, 1973, in New York City. Unfortunately, things didn’t work between the two as they divorced on February 1, 1976.

Later on December 4, 1976, he married for the second time to wife Jacqueline Carlin. However, just around 4 years into their marriage, the duo called it quits. Their divorce was finalized on November 14, 1980.

Is Caley Chase Married or Dating a Boyfriend?

Though Caley is 37 years of age, she is not married. There are no reports of her being in a marital relationship or having a husband. Also, she does not seem to have any plans to tie the knot any time soon.

How Much is Her Net Worth?

As a successful actress, writer, and producer, Caley Chase makes a good salary from her profession. If sources are to be believed, she has a net worth of around $1 million. Moreover, she lives a luxurious life and is doing pretty well in life.

On the other hand, her father Chevy has a huge net worth of around $50 million.