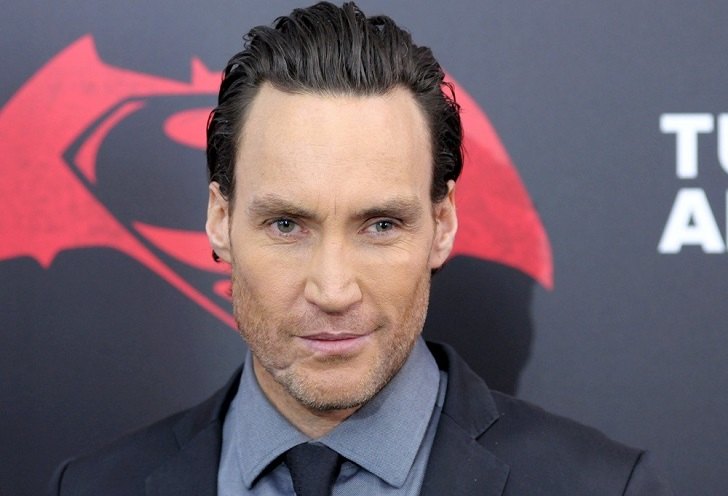 Back in 2003, unfortunately, the actor was severely injured in a deadly car accident which made him blind in one eye.

Besides, many of you might be curious to know who is Callan Mulvey’s wife? Well, her name is Rachel Thomas and they have been married for several years now. How did the two first meet and begun dating? Find out all the answers here and also know some other interesting facts about the New Zealand-Australian actor.

Callan’s spouse Rachel Thomas is a school teacher and musician. The couple tied the knot in late 2010. As per Herald Sun, they married in December but some other sources state it was in November.

Thus, the precise date of their wedding is still missing.

As for their wedding , the two exchanged vows in front of 25-guest in a ceremony held in Byron Bay.

Callan first met his wife Rachel after the actor went to Byron Bay to learn music in 2002. The two remained close pals for a few years before their friendship blossomed into an undeniable romance.

The couple dated for several years before Callan popped the question to his girlfriend-turned-fiancee Rachel in June 2010. Apparently, at the time they were holidaying in Bali.

Does Callan Mulvey Share a son or daughter with his Partner?

Yes, Callan is a father, but the gender of his child is not revealed. In an interview with The Sydney Morning Herald, it was revealed Callan has a kid. In the candid interview, the actor talked about experiencing fatherhood.

When the interviewer asked his opinion on fatherhood, Mulvey stated, “I love it, it’s indescribable. I’ve got a pretty big heart and it has exploded open even more. I’m very much in love.”

Subsequently, when asked if he wants to become a father again in the future, he stated,

“Probably not. One is enough, but I don’t know what the future holds. I want to have all the time in the world for them.”

Besides, some tabloids also suggest Mulvey and Thomas have a son named Charlie who was born in 2004. The rumors first arose after he served as the ring bearer at Callan and Rachel’s nuptials. At the time of their wedding, Charlie was 6-year-old.

Even so, Callan is yet to acknowledge the nature of his relationship with Charlie.

Callan had around twenty girlfriends before settling with his wife

Considering his heartthrob looks, it doesn’t come as a surprise that Callan had numerous affairs. Apart from his looks, the man was to girls as a moth is to a flame.

The hunk even had his first kiss when he was just 10. And the name of his first kisser was Catherine. According to Callan, the then-kids kissed behind toilets during sports. He recalls the experience, ‘terrified.’

Though he had the opportunity of going out with dozens of women, all of them were kinda abusive to him. He said in an interview,  “I’ve had a bad run with girls for most of my life – like every one of them has drilled me.”

In addition, he also revealed the majority of his relationships sometimes lasted six months and sometimes ended within a few weeks.

Besides, Callan was once rumored to be dating his Highbreak High love interest, Lara Cox. Speculations about their relationship started when their chemistry off the screen also raised many eyebrows.

Where Is Callan Mulvey From? Is Half Maori and Scottish

Francis Mulvey on 23rd Feb 1975, in Auckland, New Zealand. His father Tam and his mother Chris come from Scottish and Half-Maori ethnicity, respectively. Consequently, his ethnicity is Maori-Scottish. He was named after his paternal grandfather in Scotland.

There are conflicts in regards to his actual date of birth. Calan’s mum and dad claim it’s the 23rd, however, his birth certificate cites 24th February. Regardless, he celebrates his birthday on the 23rd.

He moved to Australia with his family at the age of 8 and spent his childhood in Manly, New South Wales.

Does Callan have siblings?

However, the detail of his parents is yet to be revealed.

Callan graduated high school from Beacon Hill High. Previously, he studied at Balgowlah Boys Campus of Northern Beaches Secondary College, however, due to failing 11 grade he had to change school. Before attending Balgowlad, he went to Manly West Primary.

Callan holds the dual nationality of New Zealand and Australia. He is from a mixed ethnical background.

Callan Mulvey landed his first acting role in Heartbreak High in 1997. He played Bogdan Drazic on the project until 1999. A year after, the actor appeared on SBS Australian comedy series, Pizza.

In 2001, Mulvey acted in Head Start and BestMaster. He scored his first role in the movie Thunderstruck in 2004. Additionally, the actor portrayed Jhonny Cooper on Home and Away (2006-08).

Callan appeared in 10-episodes of Power in 2016. He played Dean/Milan in two episodes ‘I Call the Shots’ and ‘Trust Me’. He portrayed only Dean in other remained episodes.

Moreover, in 2020, Mulvey featured in The Luminaries and Mystery Road. The same year, the actor went on to play the role of Teek on Breach.

What is Callan Mulvey Net Worth?

Callan Mulvey has a net worth of over $3 million as of 2021. The actor has collected such a good figure through his roles in several hit movies and TV shows.

Callan Mulvey was involved in an Awful Accident

Back in 2003, Callan was involved in a dreadful car accident after finishing the filming of Thunderstruck (2004). As a result, the midsection of his face was damaged.

Multiple procedures rendered him with some pronounced scars all over his face. He even lost sight in one eye and often suffers headaches.

Some Interesting Facts about Callan Mulvey

The actor enjoys rollerblading, skateboarding, and snowboarding. His other interests include mixing and record music.

All about non-binary actor JayR Tinaco: Interesting facts about their life