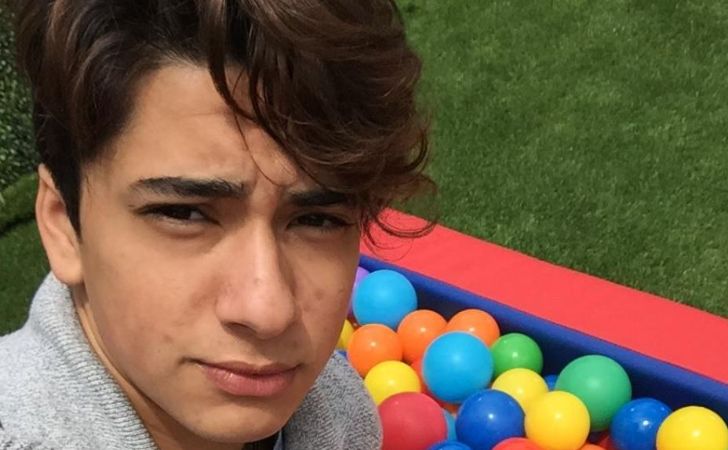 Calvin Millan is an American actor famous for his work in the Nickelodeon series Mutt & Stuff (2015). He is also recognized as the son of Mexican-American dog trainer Cesar Millan. His father is also known for the Emmy-nominated television series Dog Whisperer with Cesar Millan.

Well, Calvin Millan has started out professionally and has already achieved decent success. But what about his love life? Is he dating a girlfriend? How is his relationship with his father?

In this article, we are going to find out every detail from his relationships to his profession. Continue if you want to find out.

Calvin Millan Is The Son Of Dog Trainer Cesar Millan

To your knowledge, Calvin Millan was born on August 27, 1999, in the United States. And his age is 22 as of 2022. He is the son of a dog behaviorist Cesar Millan and his first wife Ilusion Millan. Unlike his father, his mother is a former teacher, television producer, and businesswoman.

While Millan is of American nationality but he comes from a mixed ethnic background. His grandparents María Teresa Favela de Millán, & Felipe Millán Guillen were originally from Mexico.

Talking about his siblings, he has an older brother named Andre Millan. He was born on August 11, 1994. He is also an actor and has appeared in many movies and TV series like Home & Family, Access Daily, and many others.

Career: Calvin Millan Is An Actor

As we have already mentioned, Calvin is a successful actor. He made his debut as an actor in 2008, appearing in the TV series Dog Whisperer with Cesar Millan.

Likewise, in 2012, he appeared in a documentary series Cesar Millan: The Real Story. He is most known for his work in the Nickelodeon series Mutt & Stuff. He appeared in around 78 episodes of the show from 2015 to 2017.

It stars actors like Meegan Godfrey, Cesar Millan, Victor Yerrid, Drew Massey, and many others.

Calvin’s Parents Divorced When He Was Young

As we mentioned earlier, Calvin’s father was married to his wife Ilusión Wilson. While they had a pretty successful relationship initially, they could not sustain their marriage for long.

His parents were married back in 1994, but their relationship soon turned sour. Ilusion eventually filed for divorce in June 2010. At the time of their divorce, Calvin was just around 10 years of age.

Shortly after the divorce, his father began dating fashion consultant and actress Jahira Dar. They dated for around 6 years before they finally got engaged on April 25, 2016.

Is Calvin Millan Dating a Girlfriend?

As you might have all expected, Calvin is actually dating a girlfriend. He is in a relationship with his girlfriend named Arianna Melendez. The couple seems pretty close to one another. In fact, Calvin often posts photos of his girl on his Instagram. Arianna is an animal communicator like his father.

On Valentine’s day 2021, the duo spent a pretty good time together. They had a delicious lunch at Suehiro Cafe Little Tokyo. Later on, he even posted a photo of his girl on his Instagram. In the caption, he wrote,

They were also together on his 22nd birthday. Hope their romance continues forever.

Looks like Calvin is a big fan of social media, especially Instagram. He is very active on the platform and often gives insight into his life. He has over 28.3k followers on his Instagram profile where he goes by Calvin Millan.

How Much Is Calvin’s Net Worth?

Calvin has already started a career as an actor and has also appeared in a few successful TV projects. And as far as his net worth is concerned, it sits at $500,000 as of 2022.

On the other hand, his father is pretty rich with over $25 million in net worth as per Celebrity Net Worth. As the son of a rich dad, he enjoys a luxurious life as well.

Meet Cesar Millan’s Partner Jahira Dar – Is She Getting Married?