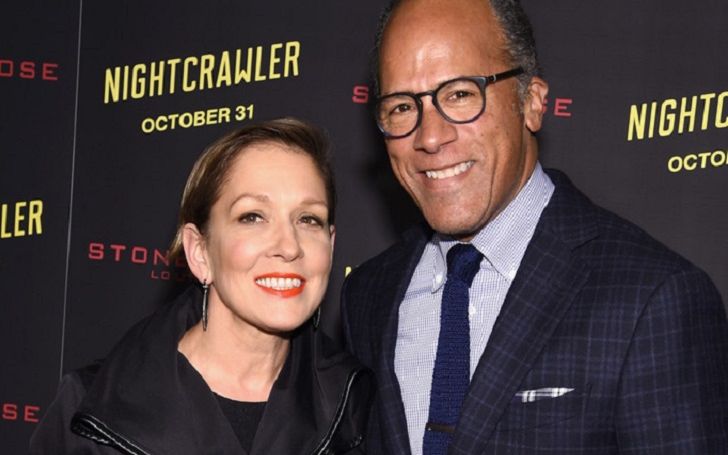 Carol Hagen (aka Carol Hagen-Holt) is a famed real estate agent with years of experience in the field. Hagen predominantly works in the New York area. Prior to real estate, Carol was a flight attendant and then she also worked in the sales and management department.

Despite all that, Carol came into the limelight following her marriage to Lester Holt, one of the most prominent on-air personalities. He has been a news anchor of NBC Nightly News since June 2015. Talking about their marriage, the couple has been married for nearly four decades. The long-lasting duo is the proud parents of two adult sons as well.

What is Carol Hagen Age? Her Early Life and Nationality

Carol has remained quite confidential when it comes to her family background and other early details. She is an American as per her nationality and is of Caucasian ethnicity.

Besides, Carol’s husband Lester was born in Marin County, California to June DeRozario and Lester Don Holt Sr. He has a mixed ethnical background as his maternal grandfather was the son of an Indo-Jamaican father from Calcutta, India, and a White Jamaican mother from the United Kingdom.

Holt attended Cordova High School and then went on to study at the California State University.

What does Carol Hagen do For a Living? Her Career as a Real-Estate Agent

Carol, who has had a long and successful career in the real estate world is specialized in helping clients relocate and maximizing resale potential.

The accomplished real estate salesperson, based in New York describes herself on her Twitter bio,

According to her bio on Realtyhop, her main goal is to make “the entire process of buying and selling real estate an enjoyable and informative experience.”

Her eight years of experience in the field and extensive experience working closely with people have made her one of the favorites and reliable agents. She is often described as “reassuring,” and “calming” by her clients.

In addition, Lester Holt’s wife used to work in the travel industry as well as in the sales and management department in the past.

Outside of her professional career, Carol is an avid lover of modern design and architecture. She also loves jazz and skiing.

When did Carol Hagen and Lester Holt Meet?

The duo first came across when Carol was a flight attendant and her then-future-husband Lester was still a student at the California State University, Sacramento in 1980.

While not much is known about their dating life, it was in the early 1980s that the duo began their love affair soon after their first encounter.

They Have Been Married Since 1982: Carol Often Travels to Several Places With Her Husband

A year after their first meeting, Carol moved with her then-boyfriend to New York City, where Holt started working as a reporter at WCBS-TV. In 1982, the couple went to Los Angeles because of Lester’s role as a weekend anchor and reporter at KCBS-TV.

The same year, Carol and Lester exchanged their vows, in a private wedding ceremony. It’s been nearly four decades that the couple has been sharing marital bliss and their relationship still looks quite stronger.

As we have already mentioned, the duo has traveled to a lot of places together. In fact, they were also seen together attending the 2016 Rio Summer Olympics in August of that year.

The Secrets of Their Long-Time Marriage

It is quite tough for everyone to maintain such a wonderful professional and personal life with the same efficiency for a long time. But, the true example here is the couple of Carol and Lester, who have been together since 1980. It makes everyone curious to know the secret to their enduring marriage.

Back in June 2015, talking to Extra TV, Holt opened up that their ability to laugh is the key to their delightful relationship. He said in the interview,

“We laugh a lot, we really do. I can be silly, she can be sillier. We just laugh through things and we know that everything, tough times will be a story at some point, and boy have I put her through some tough times with this job.”

“She understands that when the bell rings, I like to answer it, when the big story’s going on, I want to be there … I love her to death, she’s been so wonderful, she knows this job is going to bring a lot of late-night phone calls … but she’s there for me and that means an awful lot.”

Carol Hagen is the Mother of Two Children

Lester Holt’s wife gave birth to their first child, a son Stefan Holt in 1987 while living in the Windy City. He is also following in his father’s footsteps. The Pepperdine University graduate now serves as a television news anchor for WMAQ-TV, the Chicago flagship station of NBC-TV with Marion Brooks and Allison Rosati.

A few years after Stefan’s birth, the two welcomed their second son, Cameron. He is now an Equity Derivatives Trader at Morgan Stanley. He previously worked as a summer analyst for Credit Suisse.

Before that, Cameron did an internship at CNBC for three months. Carol’s younger son attended Sanford University, graduating with a B.S. in Mathematical and Computational Science.

Besides, they are also the grandparent of two. Lester and Carol became grandparents for the first time when their son Stefan welcomed a son, Henry with his wife Morgan in 2017. Stefan announced the happy news on Facebook with the caption,

Her estimated wealth is $500,000. Her work as a real estate agent plays a big role to earn such a good amount of money. In the meantime, Carol’s husband Lester has a net worth of $35 million. He is paid a salary of $10 million a year.

The couple currently resides in Manhattan.

Know Johnny Knoxville’s Ex-wife Melanie Lynn Clapp: Everything About Her