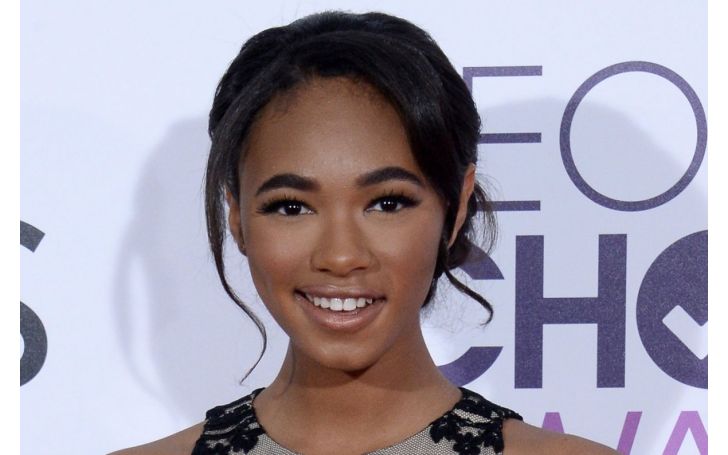 Chandler Kinney is an American actress and media personality widely popular for playing Willa in Disney’s Zombies film sequel. Her character Willa- a werewolf was introduced to Disney fans during the second film Zombies 2 in February 2020.

The rising actress began her journey at age 9 in Battlefield America. Ever since then, she has starred in several films and TV shows including the 2022 TV show Pretty Little Liars: Original Sin.

Apart from acting, she even models for big brands and has a few commercial ad credits as well. Kinney also has a huge amount of followers on social media. So is she dating anyone? Find out here in addition to some interesting facts about her life.

The Disney star was born on 3rd August 2000 with the birth sign Leo. She was born to her mother Taryn Kinney in Sacramento, California. Kinney just turned 22 in 2022.

As per reports, she grew up alongside her two brothers who prefer to live a low-key life. Chandler comes from an Afro-American ethnic background and holds an American nationality.

The Lethal Weapon actress is currently studying at the University of California, Los Angeles. She finished her high school at Oak Park Independent School in Oak Park, California.

Moreover, she learned dancing at the Debbie Allen Dance Academy, the Los Angeles Ballet Academy, and the Kirov Academy of Balley in Washington DC. Also, she studied acting at the Marnie Cooper School.

Yes, the actress is related to the late singer-songwriter and rapper Juice WRLD. As per sources, Kinney and Juice were reportedly cousins. During her interview with The Source, Kinney opened up about being related to the rapper.

When asked who was her top favorite rappers, she named Kendrick Lamar, Drake, J. Cole, and Cardi B with Juice WRLD’s name mentioned at first. She also added, “That’s family” after his name.

The singer-rapper passed away on 8th December 2019 after overdosing on several unknown pills he took in order to hide them from the police. As per the official reports, he passed away due to a high level of oxycodone and codeine present in his body.

The actress’ debut role was Chantel in the 2012 film, Battlefield America when she was just 9 years old. She then went on to appear in movies and television shows like American Horror Story, 90210, Company Town, The Haunted Hathaways, Girl Meets World, and many more.

In 2016, Kinney landed one of her most notable roles as Riana Murtaugh in the TV show, Lethal Weapon. In the show, she appears alongside Damon Wayans who plays her on-screen father, Keesha Sharp- her on-screen mother, and others.

Chandler officially became a Disney star in 2020 after she was cast as one of the leads Willa in Zombies 2: Wolf Tales. Her character was loved by many and she reprised her role in Addison’s Moonstone Mystery, ZOMBIES: Addison’s Monster Mystery, and Zombies 3.

In 2022, Kinney was cast as Tabitha ‘Tabby’ Hayworthe in the TV series, Pretty Little Liars: Original Sin alongside Bailee Madison, Maia Reficco, and others. Over the past decade, Chandler has garnered several notable work credits. She has appeared in over a dozen movies and TV shows so far.

Kinney’s Initial Goal Was To Become A Dancer

Though Kinney’s career skyrocketed in the acting world, she initially dreamed of becoming a dancer. She learned dancing at the young age of 3.

As mentioned above, she learned different styles of dance in three different institutes and honed her talent. During an interview with J-14, she said,

“I actually started dancing before I was even acting. I started when I was three years old and at my peak, I was dancing 30 hours a week, so I was so excited to get to do something where I could incorporate that skill.”

Apart from this, she has also done advertisement and commercial work for big brands like GAP, Stuart Weitzman, MiuMiu, Dolce & Gabbana, Versace, Michael Kors, and many more.

Aside from her professional career, Kinney is also involved in philanthropic works. Her organization, Chandler’s Friends was established in 2019. It focuses on the upbringing of young children, education, and more.

Likewise, the organization delivers gifts to children during Christmas every year in order for them to feel loved.

Does Chandler Kinney Have A Boyfriend?

According to various online sources, Kinney is not dating anyone at the moment. Yes, you read it right, the beautiful actress is currently single and fully focused on her rising career as well as her studies.

As of mid-2022, no news of her love affair has surfaced on the internet. Nevertheless, back in Jan 2019, fans and her IG followers were convinced that Kinney was dating actor Jonathan Fernandez after she posted a picture of them hugging very affectionately.

Some even wrote ‘cute couple’ and ‘congratulation’ in the comments. However, the pair were not dating.

We are sorry to burst anyone’s bubble but Jonathan has been married to florist Lauren Fernandez for nine years. Also, Kinney had wished Fernandez a happy birthday calling him ‘brother’ a few months ago on his b-day.

What Is Actress Chandler Kinney’s Current Net Worth?

The young actress is reportedly worth around $1.5 million as of 2022. Her career as an actress and model brings her thousands of dollars. In addition, Kinney’s endorsement deals and sponsorships also add up a decent amount to her fortune.

Besides acting, Chandler has managed to gain a huge amount of followers with her beauty and charm. As of Aug 2022, she has over 331k followers on IG, over 22.4k followers on Twitter, and over 1.2 million on TikTok.

Her IG is full of pictures from her adventure with friends, photoshoots, events, BTS from the set, and more. She spends most of her free time with family and friends or visiting new places as much as possible.