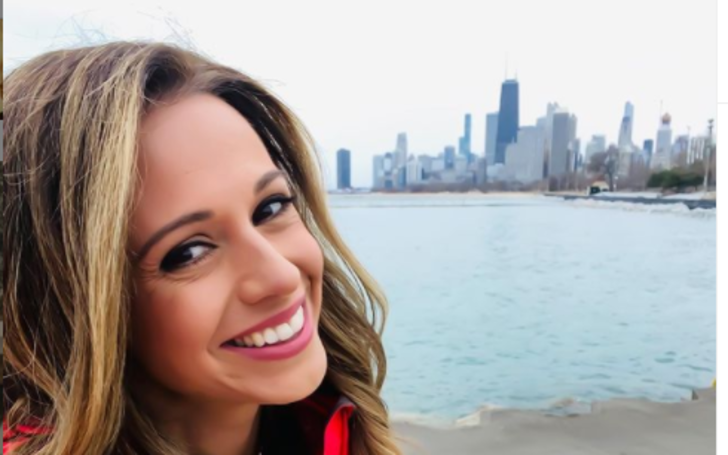 Cheryl Scott is a lead meteorologist for ABC 7 Eyewitness News, Chicago’s #1 station for news. She has been Chicago’s number one news team since 2014. When Scott is not reporting in on the weather, hosting a black-tie gala, or volunteering her time with the Chicago Red Cross, the media personality is busy enjoying most of the Chicago.

Things also got serious when Cheryl and her boyfriend marked a new step in their relationship. Actually, the two got engaged to be married.

Well, know all these details along with some other interesting facts about Cheryl Scott in the article below. Let’s start.

Cheryl Scott was born on January 29, 1985, in South Jersey, Stratford, New Jersey. Her mother’s name is Marie Picciano Scott. The 36-year-old weather reporter has two older brothers, Brian and Kevin. She along with her siblings grew up in Atco, Camden County, New Jersey.

Her dad passed away in 2010 after living most of his life as an alcoholic. In June 2021, Cheryl through her Instagram revealed how much hates the fact her dad had a disease that got in the way of their relationship and in the way of what could’ve been a great life for him.

Scott graduated from Paul IV High School in Haddonfield, NJ. During her school, she was an exemplary track-and-field runner.

Cheryl Scott Is A Brown University Graduate: Wanted To Become a Meteorologist Since The 8th Grade

Scott got the job to run track for Division I Brown University and graduated from the university in 2007 with a Bachelor’s Degree in Geological Sciences. She then finished her Meteorology Certification from Mississippi State University in 2010.

Cheryl got her start as an intern in 2006 at WCAU-NBC 10 in Philadelphia, Pennsylvania. She joined ABC7 Eyewitness News, Chicago’s #1 station for news, in December 2014.

While welcoming Scott to ABC, the ABC 7 News Director described her as “an experienced and knowledgeable meteorologist who enjoys the challenge of forecasting Chicago’s unpredictable weather.”

Scott moved to ABC 7 from NBC 5 in Chicago where she was the morning and weekend meteorologist since September 2011.

Prior to that, Cheryl Scott worked as the weekend weathercaster at WSEE-TV in Erie, Pennsylvania, in 2007 while also serving as a forecaster for a 24-hour Caribbean Weather Channel.

She wrote in her eighth-grade yearbook:

“I plan to become a meteorologist!”

When she is not working, Scott loves to travel, spend time outdoors, watch movies and play with her Beagle Lola. Sports have always played a big part in her life.

Although the meteorologist doesn’t run track any longer, she still enjoys working out and watching a lot of NFL/NHL/MLB. Her favorite restaurants are The Dearborn & Siena Tavern.

Scott considers a boat ride on lake Michigan or Navy Pier Ferris Wheel followed by fireworks as the best place for a romantic date. She also likes cocktails at The Aviary.

Previously, she worked as a weekend meteorologist for the NBC affiliate in Knoxville, Tennessee, WBIR-TV. The Brown University alum was on the air when several tornadoes devastated Knoxville in April 2011. She served as an important source for updating viewers on storm developments while providing critical safety information.

While in Knoxville, she was on air when several tornadoes devastated the city in April 2011. She instantly became a key source for updating viewers on storm developments. Cheryl says it was then that she saw her job in a new light: it was not about delivering a forecast, but rather about saving lives in times of severe weather.

Following that, she volunteered her time working with the Red Cross following the disaster. She has been an integral part of the organization since; she currently sits on the Board of Directors in Chicago.

Scott has also cameo-ed in other programs such as Good Morning America Weekend Edition. In July 2020, the New Jerseyan took part in the Chicago Public Library’s Live From The Library Series where she read the book, Cloudy With A Chance Of Meatballs to the children on air.

On Nov 23, 2020, ABC7 announced Scott was to cover a part of National Geographic Channel’s series title, “So Great, So Fragile.” The five-part series is a joint production between ABC 7’s WLS Channel-7 and the National Geographic channel. The show will discuss the dangers that the Great Lakes faced in the past, particularly in Chicago.

The series is a unique take for ABC 7, in that, it was streaming live on the channel’s various connected TV apps, such as Amazon Fire TV, Android TV, and Apple TV.

Scott’s job in the series was to team up with National Geographic scientists to analyze and talk about the threats that the Great Lakes were facing and to explore solutions for its preservation.

At a charity event, the New Jersey-born forecaster met her boyfriend Dante Deina, a DJ, sound and music engineer, and entrepreneur. They began dating in 2016. Two years later, the pair became engaged during a holiday in Hawaii. The Boston native DJ proposed to Scott at the summit of a 1000-foot-high Haleakala Volcano.

Scott told the Tribune at the Channel 7 studios that she totally blacked out when it was all happening.

Are Scott and Her Partner Dante Planning to Marry?

It’s been four years since the two got engaged but they are a little bit silent when it comes to their wedding. But, back in Jan 2022, Scott shared her photo wearing a wedding dress on her Instagram. She wrote in the caption, “truly…. ZEROooooo idea what kind of wedding dress I’ll fall in love with.”

So, although their wedding date is yet to confirm, it all looks like the two are all set to make their relationship official.

Cheryl’s fiance, Deiana, a Patriots fan, who goes by the stage name Dante The Don works as Pitbull’s globalization DJ at Sirius XM, Mixshow DJ at Kiss FM, and a resident DJ at Barstool Sport. He’s also a great friend with (and personal deejay of) Rob Gronkowski.

In addition, Dante is the senior vice president of Jally App’s marketing and brand management department. He also works as the entertainment director and partner of multiple entertainment centers such as FWD Day + Night Club.

In the past, sources have linked Cheryl to a number of guys. But one that really caught wide attention was her alleged affair with the left-winger of the Chicago Blackhawk, Patrick Sharp. He was then married with two kids.

A few months later, she allegedly began dating Josh Lachelle, the owner of Home Slice Pizza. Media caught them vacationing in Italy and the duo had also posted pictures of each other on their respective Instagram pages. They, however, never talked about what really was going behind the scenes.

Cheryl Scott Had A Painful Injury In The Past

In an interview with Capital Gazette in May 2017, Cheryl Scott talked about the time she went through a painful injury. Scott had just moved to Chicago and was still a track and field runner.

One of her first games was running down the field and she thought someone came behind her and took her out. But she turned around and there was nobody there.

A few hours later, she was in the hospital room and had ruptured her Achilles. Scott said the experience still sets her back a little bit.

Afterward, she got a nice little scar on the back of the leg. She also pointed to the fact, if anyone knows or has ruptured their Achilles they know exactly what she had gone through. Scott said how brutal it was.

She didn’t think the extreme pain set in until after the surgery. The meteorologist further stated the recovery still bothers her. She added the injury kind of ended her running career.

What is Cheryl Scott’s Salary? Her Net Worth in 2022

Scott is now a meteorologist at ABC 7 Chicago and is paid over $101k salary per annum. On the other hand, her net worth is $1.2 million. She predominantly makes her fortune from her glowing journalism career.

She currently resides in Chicago, IL.

Scott is a Dog Lover

Yes, Cheryl is a dog person who has more than two puppies. And the media personality often shares photos of her pets on her social media handles.