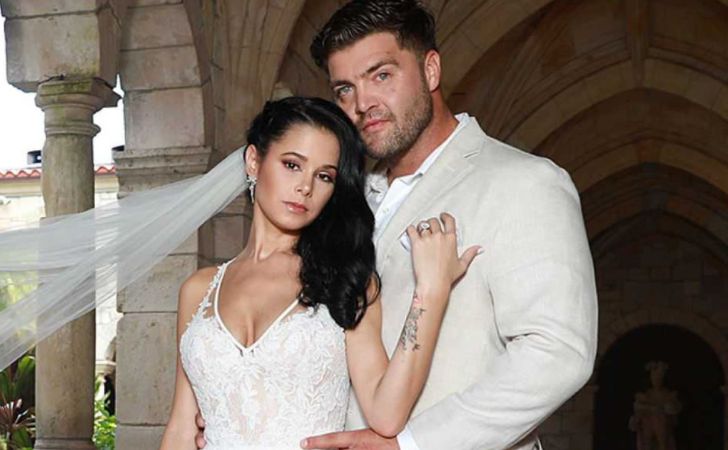 Lilianet Solares, also known as Lili Solares, is a former model. She originally comes from Cuba and is mostly recognized in the media as the wife of reality TV star Chris Tamburello. Well, her husband is famous as the cast of MTV reality show cast The Challenge.

Solares has been married to Chris for a few years now and their relationship has become a subject of attention in the media. Further, she also is also a mother of a son from her marital relationship.

Well, in this article, we are going to explore Lilianet Solares’ career, age, marital relationship, and several other interesting details. Be with us to explore more.

Lilianet Solares Is Originally From Cuba

Like we said earlier, Lilianet is a former model. She was born on Nov 23, 1991, in Cuba. After a few years of her birth, her family moved to the United States. There she along with her family members settled in the Miami area.

29 years of age, Lili shares a great relationship with her parents. But unfortunately, she has kept all the details about her father and mother away from the limelight.

Talking about her education, she finished her primary education in Cuba and completed her higher education in the United States. She is American in terms of nationality and belongs to white ethnicity.

Just in case you didn’t know Lilianet is the wife of reality TV star Chris ‘C.T.’ Tamburello. They married on September 8, 2018, in Miami. The couple interestingly chose to wed in the middle of Hurricane season in Miami. Fortunately, the rain held long enough for the completion of their wedding ceremony.

Though their big day was held in September, the husband and wife had married legally a few months earlier in a Miami court on May 31, 2018. They had applied for a marriage certificate on May 4, 2018.

Following their wedding, a special episode about their marriage was aired on an MTV reality show The Challenge: CT’s Getting Married in December 2018.

While Lilianet and Chris are happily married at present, but how did they meet in the first place? Well, the couple came across for the first time back in 2015, when he moved to southern Florida from Massachusetts. After getting to know one another, they soon began dating, which eventually turned into a marital relationship.

Though things seemed pretty good initially, Lilianet separated from her husband Chris almost two years after their marriage. Well, Tamburello talked about his rocky relationship with his wife in an episode of The Challenge: Double Agents.

He stated how he has not been in a good mental state for a few seasons of the show since his marriage. He also shockingly revealed that he and his wife Lili were living separately for while. Talking to People, he said,

Marriage was not going well. We’re separated. I feel like I’ve been running from problems for a long time, and I feel like they finally caught up with me. And I couldn’t lie to myself anymore.

However, Lili’s spouse Chris “CT” Tamburello also went on to commit that he will focus on things back again and move on. He said,

But luckily, shortly after Tamburello’s elimination from the reality show, the couple seemed to have reconciled. In fact, Lilianet even shared a photo of him on her Instagram that is set to private.

Prior to this, the couple was also already once rumored to have separated back in 2019. Well, Chris shut the rumors sharing a clip of his wife pouring drinks for him. In the caption, he wrote,

Rumor has it that we broke up… Weird how we were the last to find out about it.

Solares Welcomed A Son With Her Husband Back In 2016

Like we all know, Lili is a mother to a son with her husband. Well, she gave birth to her child in 2016, a couple of years before she tied the knot with Chris. They have named their son Christopher “CJ” Tamburello Jr. but have not revealed his exact date of birth.

Moreover, they kept the birth of their child a secret until early 2017, when Chris revealed that he had become a father. In fact, their little kid was also featured in an episode of The Challange: Invasion.

At the time Lili and Chris were dating and she was even addressed in the MTV reality show as Tamburello’s girlfriend as he talked to her on phone but didn’t reveal her identity.

Lilianet Solares Is A Former Model

While Solares is now identified more as the spouse of a reality TV star CT, she had an identity of her own in the past. Well, she is a former model and was involved in the profession before she met and married Chris.

5’5″ tall Lili does not seem to be active in modeling at present. However, in the past, she featured in a few magazines and also reportedly auditioned for commercials.

What Does Lilianet Solares Do For a Living At Present?

As of 2021, she is a General Manager at Lola Bar in Miami. Well, she seems to enjoy her job and often shares glimpses from her workplace on her Instagram. Apart from this, Lili also has investments in real estate.

Lili is active on Instagram but unfortunately, she has set her profile to private. As of 2021, she has over 47k followers on her Instagram. Unlike what is popularly believed, she is not active on Twitter.