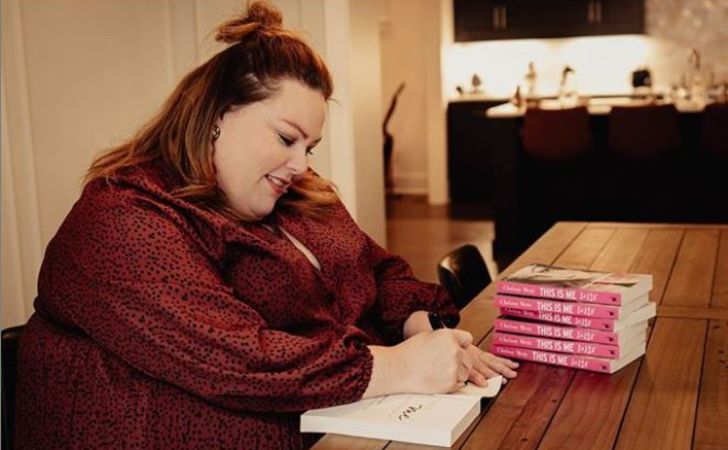 Despite the body image and weight issues, Chrissy Metz has been gracing the world with her impressive acting prowess. However, This Is Us star is fairly private with her personal life for some time now but it doesn’t mean the actress doesn’t have a romantic part to talk about.

The actress was in fact married in the past but unfortunately divorced her husband. Besides, she also has a few other romantic relationships as well. But who is Chrissy Metz’s boyfriend at present?

Here is the complete love story of Metz. Let’s straight-dived into the story!

The beautiful Chrissy has finally revealed her new boyfriend to the world. The American actress is currently dating Bradley Collins. The couple reportedly began dating back in May 2020.

Metz announced her relationship via her Instagram on the occasion of National Boyfriend Day. The This Is Us actress shared a series of photos showing off her bonding with her new love.

Happy #nationalboyfriendday to my dreamboat! Bradley, from the first moment I laid eyes on you I wanted and needed to know you. Now I feel so lucky to love you. You can #Collinsmesmitten for sure! Thank you for being the absolute wonder that you are, I love you.♡

On the other hand, Bradley took the opportunity to announce the news a few days before Chrissy, where she wished her birthday in a beautiful Instagram post.  In the caption he wrote:

Happy Birthday to my love, Chrissy.
From our first date in May, you’ve had me #Metzmerized with love, laughter and kindness.
You’re not the best thing that’s happened during quarantine; you’re the best that’s ever happened to me.
I love you. You the Best!

Later, there were also rumors that the lovebirds were already engaged after Chrissy was seen wearing a ring that was assumed to be an engagement ring. However, she later clarified saying they were not engaged and that the ring was a Christmas gift from Bradley.

No, as of August of 2020, Chrissy isn’t in the dating scene. The actress has called it quits with her composer boyfriend, Hal Rosenfield.

Previously, Chrissy was in a committed relationship with Hal Rosenfeld for a couple of years. In November 2018, a source revealed exclusively to the Us Weekly that the duo was dating. The source stated,

“They’ve been dating for a few months now. He is such a sweet guy and everyone around Chrissy really likes him.”

They were seen holding hands during a night out at the W Hotel in Hollywood on 11th November 2019. In an interview with Access Live in October that year, Metz hinted at her new romance.

She told, “I’m socializing with a single person.”

In early October, Chrissy celebrated her 38th birthday in Palm Springs Rosenfeld. Her boyfriend Rosenfeld was also there. She shared the photo on Insta with the caption, “Reminiscing about one special birthday weekend with a few special people at such a special place.”

Further confirming her relationship with Hal, the actress stated in a video obtained by Us Weekly, “Maybe I’ve already found [what I’m looking for].” on 30th October.

In July 2019, Chrissy Metz opened up on The Weekly Williams Show about how her relationship with Rosenfeld began. The couple first started chatting on Instagram after Hal messaged her a couple of times. She told Williams,

I get thankfully a lot of messages and I don’t always get to see them all. He had messaged a couple of times, very sweet but not obnoxious or weird. And then I was like, ‘Let me see if he’s cute. Oh, he’s cute! Okay, I guess I can respond.

The two subsequently hit it off.

They were pretty open about their romance. The two walked the red carpet together for the first time at the 2019 Golden Globe Awards, in Beverly Hills in Jan 2020. The following month, they were spotted cozying up at the beachside.

Back in November 2018, Chrissy Metz’s boyfriend posted a sweet photo with his girlfriend on the eve of Thanksgiving.

Today and everyday, I’m thankful for a year of great friends, family, work, and life. I’m also thankful to have such an amazing, beautiful, inspiring, loving, and supportive woman in my life. Happy Thanksgiving, everybody!

In Feb 2019, This Is Us costume designer, Hala Bahmet also told Hollywood Life they were super happy with each other.

The rumors became apparent about her engagement after Eloquii, the fashion brand for plus-sized women shared a picture of Chrissy. In the clip, This Is Us actress is clearly seen with an engagement-like rock on her ring finger.

Several sources say that her boyfriend Rosenfeld reportedly popped the question. But they never confirmed the speculations.

No, they aren’t together. The couple’s romance ended after two years of a love affair in August 2020. Sources say Chrissy and her now ex-beau Hal separated on mutual understandings.

Even before their amicable split, the two remained ultra-secret about their relationship from the past year. Thie secretiveness had already sparked speculations regarding their break-up.

Their fans started believing more on their possible split, when Metz shared a lengthy emotional message centered on tough relationships in June 2019. Her post goes like this,

If you’re deep into a relationship and feel disconnected, explore what parts of your partner you might be rejecting and where you might feel rejected, too. If you can bring that convo forward, or share this post and start a discussion about how to strengthen integrated love, I would love for you to do that. That’s all for now.

At the time, although the actress wasn’t directly addressing her relationship with Hal, it led fans to believe the two may have broken up. And now we know, they certainly have broken-up.

She also Dated Josh Stancil: How long Did they Remain Together?

Chrissy Metz dated This Is Us cameraman Josh Stancil. The couple began dating after they first met on the set of This Is Us. The show premiered on NBC on September 20, 2016. Its cast members include Milo Ventimiglia, Mandy Moore, and more.

The actress gushed about her new bae at KIIS FM’s Jingle Ball 2016 at Staples Center in December. She told that “He’s not an actor, but he is a sweet treat and he’s wonderful.”

But, Chrissy remained very secret on revealing the identity of her boyfriend at the time. She gradually started appearing with Josh who worked as a camera grip on the project.

In August 2017, the actress revealed her experience filming romantic scenes with her now TV husband Chris Sullivan in front of her real-life boyfriend Stancil.

There was the one—the Christmas episode where [Chris and I] did kiss 12 times and Josh was texting me and he was like, ‘Why does [the director] have you guys kiss 12 times?’ And I was like ‘I don’t think she’s having us kiss 12 times, she’s looking for different angles to get.’ And he’s like, ‘OK, I was just asking!’”

However, they couldn’t go as long as a couple. Metz told her relationship with Stancil was over during her appearance on The Wendy Willians Show on March 30, 2018. When the show host, Williams asked if they were still dating, Metz responded, “I’m dating myself currently.” She also revealed the two separated amicably and still were good friends.

Chrissy Metz is a divorcee who previously was married to husband Martyn Eaden, a British journalist. They tied the knot on 5th Jan 2008 in Santa Barbara, California.

The couple, nonetheless, went their separate ways in early 2013. Their divorce proceedings ended a year after in 2014.