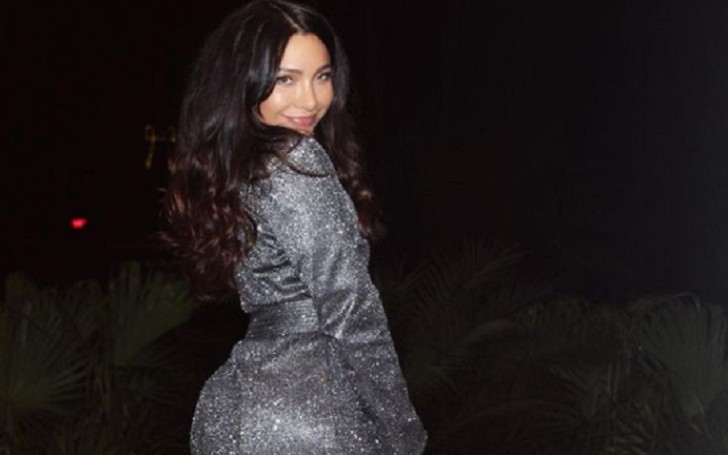 Christina Evangeline (aka Christina Evangeline Thompson) is a multi-hyphenate with a budding career in fields like photography, videography, interior designing, and volunteering. Additionally, Evangeline is also a passionate humanitarian who even co-founded Evermore NYC, an organization that aims to connect people who are going through the loss of their loved ones.

But, most of all, Christina is known as the wife of Kenan Thompson, the longest-tenured comedian on SNL. The couple has been blissfully married for around a decade and is also proud parents of two children.

Besides, here we have come with several unknown facts about Christina. Take a look!

Where was Christina Evangeline Born? Her Birth Details

Back in May 2018, Kenan Thompson’s wife shared a throwback photo with her mother. In its caption, Evangeline wrote that the photo was taken “sometime in 1989, somewhere in NY.” Thus, it confirms that the celebrity spouse is originally from NYC.

Although the information about her parents remains a little bit private, Evangeline frequently shares snippets of both her father and her mother on Instagram. She also has a sister named Rem.

Is Evangeline black or white?

Talking about her ethnic background, Christina has a mixed ethnical background and has an American nationality.

What does Christina Evangeline Do? Her Career Details

Evangeline is an interior designer who reportedly serves as a designer at Gucci, in New York City at present. In addition to that, she has also worked as a model for several well-known companies.

Also, Kenan Thompson’s wife portrayed a pageant parent in a short comedy ‘Mini Supreme,’ in 2015. She appeared along with Phillis, Joan Mankin, and Bella Stardust in the project.

She is a Photographer and Videographer

As per her personal website, Christina also juggles photography and videography along with her motherhood. Over the years, the multi-talented woman has traveled to a number of exotic places throughout the world.

Back in 2017, Christina and her daughter Georgia went on to visit Disney World to celebrate her third birthday. Additionally, the family of four were on a family vacation in Italy, where they visited Florence, Rome, the Vatican, Amalfi, and more.

Christina is the co-founder of Evermore NYC

She also formed the organization Evermore NYC along with her therapist friends Michele and Jack. It helps people cope with the loss of a loved one.

The people linked to an organization described it as “a dinner party for anyone who is trying to cope and move on after losing a loved one.

“This is not a pity party by any means. It is simply a chance to meet and identify with others who have been faced with similar experiences.”

Similarly, Christina also helps several other charitable organizations like ‘The Cristian Rivera Foundation’ ‘Save the Children Federation,’ My Stuff Bags Foundation,’ and the ‘American Refugee Committee.’

Are Christina Evangeline and Her Husband Kenan Thompson Still Married?

The two were first introduced by a talent manager named Danny Estrada back in the late 2000s. Sources say, the two subsequently hit it off. And they dated for a few years before they tied the knot on 11th November 2011. They organized their wedding ceremony in the Arctic Room of the George Aquarium in Atlanta. The veteran comedian Nick Cannon hosted their wedding reception.

A source close to the duo told Us Weekly that “[They’re] very happy. They’ve lived together as a couple and were excited to share the moments with close friends.”

Moreover, an insider of the duo further said, “She was thrilled and a beautiful bride.” For their wedding outfits, Christina wore a chic silky white gown with a long trail.

They are leading a blissful matrimonial life since then.

Evangeline has two children with her husband. The couple welcomed their first child, a daughter Georgia Marie Thompson on 20th June 2014, in New York City. Their second daughter Gianna Michelle Thompson was born on 31st July 2018.

Back in June 2020, Kenan opened up to People about his fatherhood and how his life changed after he became the father of two kids. He said,

“I think the biggest wake-up call is how immediate it is. One day you’re not a dad and then the next moment you are. You’re just a dad from that point on.”

“And definitely, my coolness just got sucked right out of me. I didn’t know … I didn’t even feel it, but I just immediately started wearing black socks and shorts and just being really corny at stores and over-asking questions about items that are super obvious and in my face.”

On the other hand, his wife Evangeline described parenthood as “a life-changing and completely fulfilling experience,” on her personal website.

Besides, while speaking to Variety ahead of the premiere of the NBC sitcom Kenan, Thompson made it clear that his family is his first priority. While the interviewer asked him how many seasons he wanted to perform on the sketch show, he said,

“I have a certain number I would love to get to. I think 20 is a good, round, even number that I’m close to.

I feel like that is in reach, but also it would be respected if I don’t get there. Like, 18 is fine, 19 is fine. It doesn’t really matter. What matters is, will I have time for my family? There’s only 24 hours in a day.”

What is Christina Evangeline Net Worth?

Evangeline has earned a good amount of fortune from her variety of works. According to sources, her estimated fortune is $1.5 million as of 2022. Besides, her comedian hubby Thompson has a $13 million net worth.

The family of four currently resides in New York City.