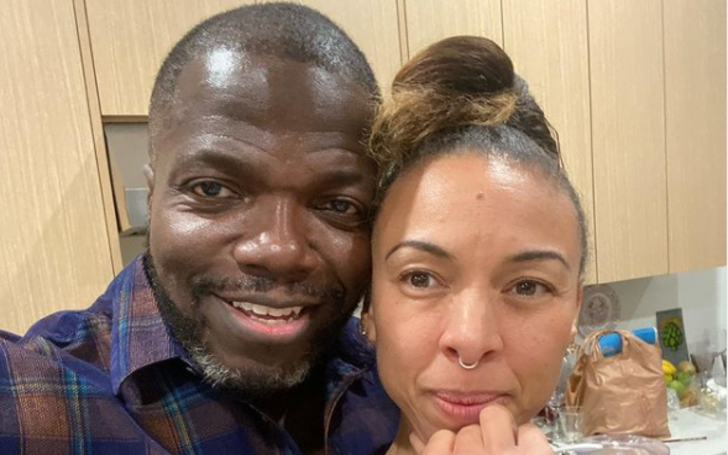 Coco Fausone is a yoga instructor; better known as the celebrity wife of Reno Wilson. People know her husband, Wilson for his role as Howard in the sitcom The Cosby Show, Officer Carl McMillan in Mike & Molly, Stan Hill in Good Girls, Wes in The Chronicle, and Detective Tom Selway in Blind Justice.

Fausone and Wilson have been together for over 20 years during which they became parents to two children. Know how the couple has been keeping it strong for this long.

Also know the reason behind Fausone’s ever younger looking image along with her early life, career, personal affairs, and much more.

Coco Fausone Is A Native Of Los Angeles

Fausone was born on March 29. She grew up in Siver Lake, LA, California spending the majority of her childhood and teenage years dancing and choreographing.

The daughter of Patsi Simon, later worked teaching dance, creating cheer choreography and movement for kids. Fausone’s sister, Gamynne Guillotte is a transient architect who studied at the Southern California Institute of Architecture.

Coco admits she has more of a natural love for the active lifestyle than a career. Due to her likeness for sharpening her physical, and mental strengths she is fond of running the marathon, surfing, and snowboarding.

Wilson’s spouse studied at Santa Barbara City College. She also attended Los Angeles City College from where she graduated with a degree in communication. Coco later studied Recording Engineering at UCLA Extension. She is a former student of Alexander Hamilton High School.

Professionally, the LA native has been in occupations of dance and fitness since 1997 including cheer choreography for the Santa Barbara City College cheer team, dance instruction for Hamilton High, an episode of yoga choreography for the CBS show Mike and Molly, and personal goal tracking. Coco even introduced her husband, Wilson to spinning, and when she began her teaching career, he went to classes with her.

The bilingual fitness instructor got her first big project with the Warner Bro Group Of Entertainment Companies. In 2011, the media giant hired Fausone for a month to help with a yoga scene on her husband’s show Mike and Molly. After that for the next six years (2011-2017), she became an instructor and designed sports apparel for YAS Fitness Center.

In January 2015, the LA Eastsider started her own venture providing yoga services to people in their homes. The mother of two did so for about two years. A year before, in 2014, she had become the CFO of Babe Wilson Entertainment. Coco has been in the position since.

In 2017, Fausone opened up a spin/cycling and yoga studio named, The Cycling Pigeon at 4505 Eagle Rock Blvd. in Los Angeles, California. The fitness center was originally in Cyprex Park.

It includes live stream yoga. In addition to Fausone, the morning and evening service offering studio include four other instructors, Kali, Jennifer Fuentes, Alejandra Guzman, and Armando Uribe. Coco’s classes include a breath-centered beginning to an Iyengar style asanas to core strengthening exercises. The R&B lover also focuses on an ambient restoration of body and mind.

Her son Renzo started junior high in August 2021 while her daughter, Deni, (born, 2001) is a former high school volleyball player and was the female athlete of the year competing for Notre Dame High School.

The family of four reside in Los Angeles, California. Wilson and Fausone have been together since 1996. They had their first date on January 28, 1996, Coco’s husband revealed on his Instagram.

Moreover, showcasing his love for Coco is not the only thing that Wilson does for his wife. The 53-year-old also takes time to promote Fausone’s business and share quirky incidents that have happened throughout their marriage.

Coco And Her Husband Landed $1.6 Million For Their L.A. Home With Wraparound View

In September 2021, Fausone and her husband of twenty years bagged the asking price of $1.6 million for their contemporary residence in L.A. It was in the Glassell Park neighborhood, just across the Los Angeles River from Silver Lake and some six miles due north of downtown and Dodger Stadium. It covered 2,888 square feet, included 3 bedrooms, and 2.5 bathrooms. In addition, its lot size equals 7,406 square feet.