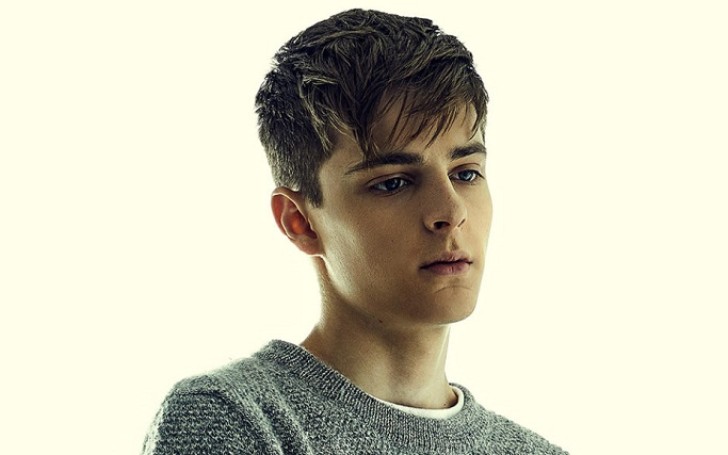 Corey Fogelmanis rose to fame and grabbed worldwide popularity after his breakout role of Farkle Minkus on Disney’s TV series, Girl Meets World. He has also worked in many other movies and TV shows.

Talking about his personal life, there are rumors about his affair with singer and actress Sabrina Carpenter. Is the duo really an item or just close friends? Besides, there are also speculations about Corey Fogelmanis’ sexuality?

Let’s find out everything about his personal and professional life.

Who is Corey Fogelmanis? Where is He From?

Fogelmanis is an American actor who was born on 13th August 1999, in Thousand Oaks, California. He is the son of Dain Fogelmanis (father) and Shannon Fogelmanis (mother).

The actor has a younger sister named Baylee Fogelmanis. She was born on 24th January 2004. His sister Baylee loves to dance and play games.

Several sources claim Baylee is Corey’s brother and not a sister. The loose talk might’ve started due to her tomboyish looks, but rest assured, she is indeed his sister.

Fogelmanis holds an American nationality and belongs to mixed ethnicity. He is of Latvian descent and his zodiac sign is Leo.

Corey had a knack for acting from an early age and subsequently, began performing at the mere age of six. He attended the Broadway Artists Alliance Intensive Workshop, in New York City.

He later performed in several productions like Peter Pan and Tinker Bell at The Pasadena Playhouse in Southern California.

Corey bagged his first role in a short movie, The Maiden and the Princess in 2011. Moreover, a year later, he acted in two TV series Partners and House of Lies.

In 2015, the budding actor played the role of  Stevie Moops in the TV series I Didn’t Do It. In addition, he appeared in the horror-comedy fantasy flick Mostly Ghostly 3: One Night in Doom House in 2016.

The talented youngster made his breakthrough playing Farkle Minkus in the mega-hit comedy Girl Meets World, a spin-off of the equally popular show, Boy Meets World.

He appeared in the TV show from 2014 to 2017 sharing screen alongside Rowan Blanchard, Ben Savage, and Sabrina Carpenter.

In 2017, Fogelmanis landed the role of Jasper Perkins in the show PrankMe. He made his silver-screen debut portraying Andy in the horror movie Ma along with Oscar-winning actress, Octavia Spencer in 2019.

The same year, Corey appeared in the TV series, Into the Dark.

Corey’s Other Hobbies: He is a Passionate Photographer

Corey loves photography and has even created a separate Instagram account @outofthedarkroom to showcase his skills. It has over 28k followers as of 2021.

But it seems Corey is less active in the field for the past few years as the last time he uploaded a photo was on 7th September 2017.

Is Corey Fogelmanis dating Sabrina Carpenter? Who is his girlfriend?

Corey Fogelmanis doesn’t have a girlfriend at this moment. There is no sign of a possible relationship in his life as of now.

However, there were once rumors that Corey is dating singer-actress, Sabrina Carpenter. Despite all the shipping, the two are not dating each other, instead, they are just close friends.

In an interview, Sabrina also confirmed they are just friends. While talking to Seventeen, Carpenter stated,

“Corey [Fogelmanis] has been a big supporter in my life. He’s so funny and smart. And he’s a great friend—but never [more than that]”

Besides, Sabrina is currently dating her actor boyfriend, Griffin Gluck. They are together for some time now and even attended various events as a couple.

Corey’s dating life has been under the radar for several years because of which a few sources claim that the actor might be gay. Well, in this modern-day and age, where coming out is relatively easier, we’re sure Corey would’ve come out as well if he really was into men.

So far, Corey has not commented on the matter. Fans should stop speculating about his secret boyfriend unless the actor himself says something.

What is Corey Fogelmanis Net Worth?

Corey Fogelmanis has collected quite a good fortune from his acting career. As per sources, his net worth is more than $200,000.

Owns a Pet Feline and a Dog

Corey Fogelmanis is a dog person who has two pooches. He also owns a cat named Louie.

Not usually a cat person, but I love this cat.

He often shares beautiful snaps with them on his social media accounts.

Sabrina Carpenter Boyfriend: Griffin Gluck To Bradley Perry, All The Man She Dated