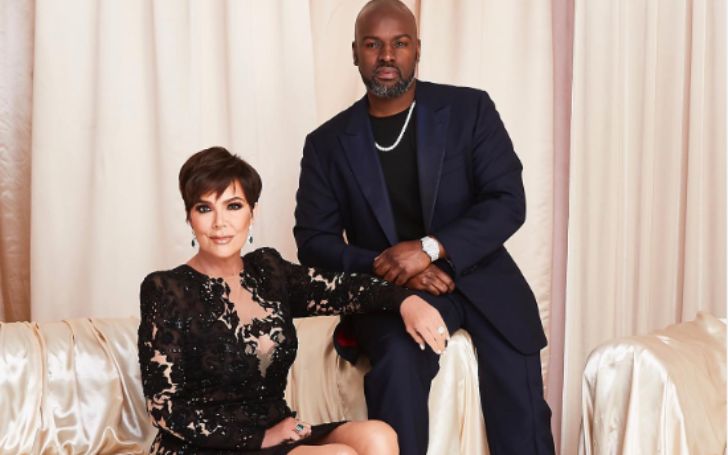 Corey Gamble is a talent manager who came to the limelight after being in a relationship with Kris Jenner. She is a popular American media personality, socialite, and businesswoman, more popular as the mom of Kylie Jenner.

The on-and-off couple has been in a relationship for seven years now. Despite the bumps on the road of their love journey, Gamble and Jenner have finally been able to pull it off. His girlfriend has split several times with him as her kids weren’t happy with their relationship in the beginning. However, it looks like the duo has been able to convince them as well as they seem to have a good bond now.

On the other hand, the rumors of the couple’s engagement and even a secret wedding are all over the media. As Kris Jenner was witnessed with a big diamond ring on her wedding finger, the public started getting curious about the story of the ring, making multiple speculations. So, are Gamble and Jenner engaged or married? Are they still together? Does Gamble have any ex-wife or girlfriend? Read the article below to find out all details about Kris Jenner’s boyfriend, Corey Gamble.

Corey Gamble Is an Atlanta Native

Kris Jenner’s boyfriend Corey Gamble was born in the year 1980 and celebrates his birthday on November 10. Similarly, he was born and raised in Atlanta Georgia and holds American nationality.

As his mother and father were Afro-Africans, his ethnic background is the same as theirs. However, since Gamble lives a low-key life, he hasn’t revealed their identity yet.

Moreover, Corey went to Westlake High School to complete his primary academics. For further studies, he joined Morehouse College to graduate in business marketing after graduating high school in 1999.

How Old Is Corey Gamble?

What Is Corey Gamble’s Job?

The 42 years old is an American television personality, business executive, and also talent manager. He is working as a talent manager for SB Projects at present. It is an entertainment company owned by Scooter Braun which is associated with popular celebrities like Justin Bieber, Ariana Grande, and more.

Furthermore, he came to notice when he started frequently appearing in Keeping Up With The Kardashians. However, it aired its last show on June 10, 2020. Not only that, he starred in 2 Minutes of Fame and worked as executive producer as Glitter Ain’t Gold.

Is Corey Engaged With Kris Jenner?

Well, there is no solid confirmation of Corey and Kris Jenner’s engagement. Regardless, there are many speculations that they could be engaged to get married. Having said that, she almost spilled the truth when she came to James Corden’s chat show, Spill Your Guts Or Fill Your Guts.

During the interview, when she was asked if she was engaged as she had a diamond ring on her wedding finger, Kris Jenner got awkward. She passed the question with a laugh and ate a cricket instead. This made the public believe the rumors to be true.

Jenner also said she is not going to answer the question. Maybe she wanted to keep her low-key relationship a secret. Meanwhile, Gamble and Jenner often go out on vacations and love to spend time together. Though we can usually see their happy pictures in their social media posts, they haven’t admitted to getting engaged or married.

How Did Corey Gamble Meet His Love Kris Jenner?

The lovebirds first met in August 2014 in Spain. At that time, Corey was working as a tour manager for Justin Bieber and attended the birthday party of the fashion designer Riccardo Tisci in Ibiza. It was then, that the pair came across as Jenner was also present at the party. She was in the process of getting a divorce from her ex-husband Caitlyn Jenner.

Nonetheless, the couple hasn’t shared when they officially started dating. Later, they made it a kind of official by sharing pictures of them on a double date with Billy Ray and his wife Tish.

Why Is Corey Gamble With Kris Jenner?

This is the question of many people why the guy is with someone who is 25 years older than him? Well, Corey Gamble considers Kris Jenner as his support system, and so does her.

Jenner in an interview for WSJ Magazine in 2021 even applauded her guy. She stated,

“He’s the greatest guy, and he’s just an amazing support system for me, and he really gives me a lot of strength and insight.”

Are Corey and His Girlfriend Kris Secretly Married?

There are lots of rumors in the market about Corey Gamble and Kris Jenner’s secret marriage. However, upon repeatedly asking questions regarding their relationship, Jenner finally spoke about it.

Jenner also answered the rumors of her being secretly married to Gamble by saying,

“I’m not secretly married. I swear to God on all my kids and daddy.”

The couple was not publicly committed before but they decided to move in together in 2022 shutting all the baseless gossip that was talked behind their back. They are traveling together and are happy to spend their time with each other.

On the 0ther hand, the duo previously kept splitting several times due to various reasons in their 7 years long relationship. Sometimes because of the Jenners family or other causes, they used to be on and off in their love life. But looks like they are planning to go a long way this time.

Despite many hurdles and obstacles on the way, Corey was able to convince Jenner’s family. At the beginning of their relationship, Kris’ daughters were frequently questioning their mom’s affair with someone very younger than her. They were worried and concerned about her, however, the man was able to convince them that he really loves the woman he is with.

Looking at the pair’s social media feeds, it seems not only the two but Jenner’s family is also happy with their alliance now. His long-time girlfriend even said her kids and mother love him. In fact, Gamble recently shared Kylie Jenner’s picture on his Instagram wishing her a happy birthday.

Happpppppy B day to the One of one’s. To My Ace thats always got my back out here in these trenches of life…. Thank you @kyliejenner
Big Love ❤️HBD. &
Thank you for all & my beautiful grand babies! Rav what up … ha

The posts show that Gamble has totally gelled up with the family and cares for them. Though his family is a mystery to the public and maybe Jenners as well, he has made their family also his own.

Since the talent manager likes to keep his private life away from the media, Corey hasn’t opened up much about his past love affairs. However, according to some sources, he was in a relationship with a girl named Sheree Buchanan. She is a reality TV star who has starred in the VH1 reality television show titled Atlanta Exes.

Sheree is the only girl that is known as Corey’s ex-girlfriend before dating Kris Jenner. Yet, it is still not clear if she was only his ex-girlfriend or if the two were married.

What Is Corey Gamble’s Net Worth?

Kris Jenner’s boyfriend Corey is a multimillionaire just like her. The talent manager and TV personality make millions of money through his profession. As of 2022, the net worth of Corey Gamble is $15 million. Even though he earns millions, he doesn’t like to show off and keeps his lavish life simple.

Meanwhile, his girlfriend has amassed a total fortune of $190 million. As she is a popular media personality, socialite, and businesswoman, it is not a surprise for her to be a millionaire.

Who Is Blake Bortles Wife? Or Is He Dating A Girlfriend? All The Details