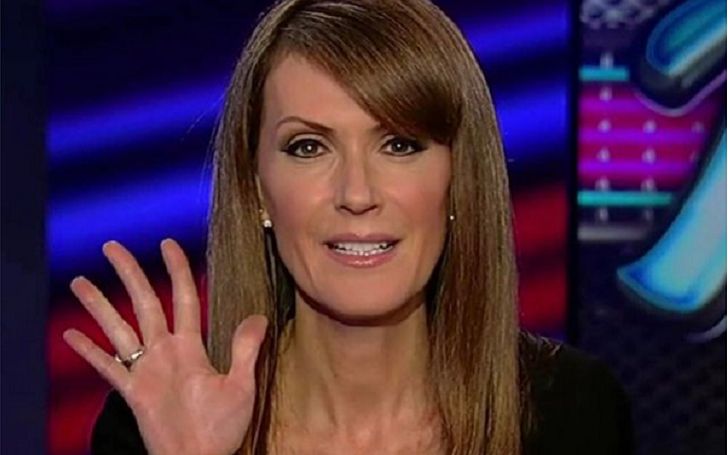 Dagen McDowell did a number of dead-end jobs like a dressing room attendant, beer seller at a golf course, and more before segued into the world of journalism. She currently serves as an anchor and analyst on the Fox Business Network. McDowell is also a business correspondent for the Fox News Channel.

In addition, moving toward her love life, Dagan has been in a blissful marital relationship with her husband Jonas Max Ferris for several years now.

Here we have come with every detail of Dagen McDowell including her mother’s battle with cancer and more. Let’s take a look!

Who Are Dagen McDowell’s Parents? Her Mother Died of Cancer

Back in Feb 2021, McDowell opened up in one of her Twitter posts that her mom died of metastatic lung cancer. The fatal disease damaged her backbone and pelvis. In July 2020, Dagen shared a photo of her late mom that was taken six weeks before her demise. Her caption is,

“Dogs know when and how to provide comfort, love, affection. Unlike so many humans, they race toward those who are suffering and snuggle in, stay close, provide peace. I took this photo of Momma six weeks before she died. Snuggling with Charlie for hours on end was one of her favorite things in the final months of her life.”

Her late mom used to play drums as a young. She also has a brother.

On the other hand, Dagen’s great-great-grandfather was Charlie McDowell.

Where is Dagen McDowell From? Details on Her Age and Education

Mary Dagen McDowell was born on 7th January 1969, in Brookneal, Campell County, Virginia. She grew up in a family that belongs to Irish background. She is an American and belongs to mixed ethnicity.

Talking about her education, McDowell went to Randolph-Henry High School. She later graduated from Wake Forest University with a degree in Art History.

McDowell was once a dressing room attendant. She also spent some time, selling beer on a golf course. After going through a few low-profile jobs, Dagan entered into the field of journalism with her role as a financial journalist at the Institutional Investor’s Newsletter Division.

She later also worked as a personal finance columnist for TheStreet.com called “Dear Dagen,” along with Tracy Byrnes. Besides, Dagen worked for a few other reputed online tabloids like SmartMoney.com and SmartMoney magazine.

In 2003, the journalist made her big break after landing a job as a business correspondent at the FOX News Channel. During her time at the network, McDowell appeared in numerous FNC shows like Bulls & Bears as the host, Your World with Neil Cavuto as a regular guest, and Outnumbered as well.

McDowell is now a business correspondent for the Fox News Channel. She also serves as an anchor and analyst on the Fox Business Network. She is a co-host of Mornings with Maria on the network and is also a weekly panelist for Cashin’ In.

In addition, Dagen was a business contributor on the Imus in the Morning radio show.

Who is Dagen McDowell’s Husband? Her Wedding Details

McDowell has been married to Jonas Max Ferris for a long time now. The couple tied the knot back in 2005, in a low-key wedding ceremony. Sources say the bride bought her wedding dress at Kleinfeld Wedding Emporium in Brooklyn.

As for their first meeting, Dagen came across her future husband while both of them used to work on the show Cashin’In. In an interview with Fox Business, Jonas revealed that the show was entirely based on their arguments. He said,

“We were sort of handpicked- At least I think I was handpicked, I don’t know about Dagen- To basically argue in a mutual fun faceoff on the show… cast to because of our argumentative nature.”

In the same interview, Dagen admitted that she was still married to her first husband when she met Jonas. However, other than that, there is nothing more about her first marriage.

Besides, Dagen has been leading a blissful marital relationship with her second spouse Jonas for a long time now.

The couple doesn’t have any kids. But some online tabloids suggest that the duo currently lives in Virginia with their daughter. Nevertheless, it is yet to be revealed whether the child is from Dagen’s previous relationship or Jonas’ past love affair.

Besides, they have also adopted a chihuahua named Ramon.

Her Net Worth and Salary

Dagen has an estimated net worth of $5 million as of 2022. She is also paid a considerable amount of salary.

On the other hand, Dagen Mcdowell’s husband Jonas, an economist, investor advisor, and economic analyst has an estimated net worth of $5 million.

Born and raised in Southfield, Massachusetts, Jonas came to the limelight after appearing as a panelist on the Fox Business Network show, “Cashin’ In”. He is now the owner of MAXfunds.